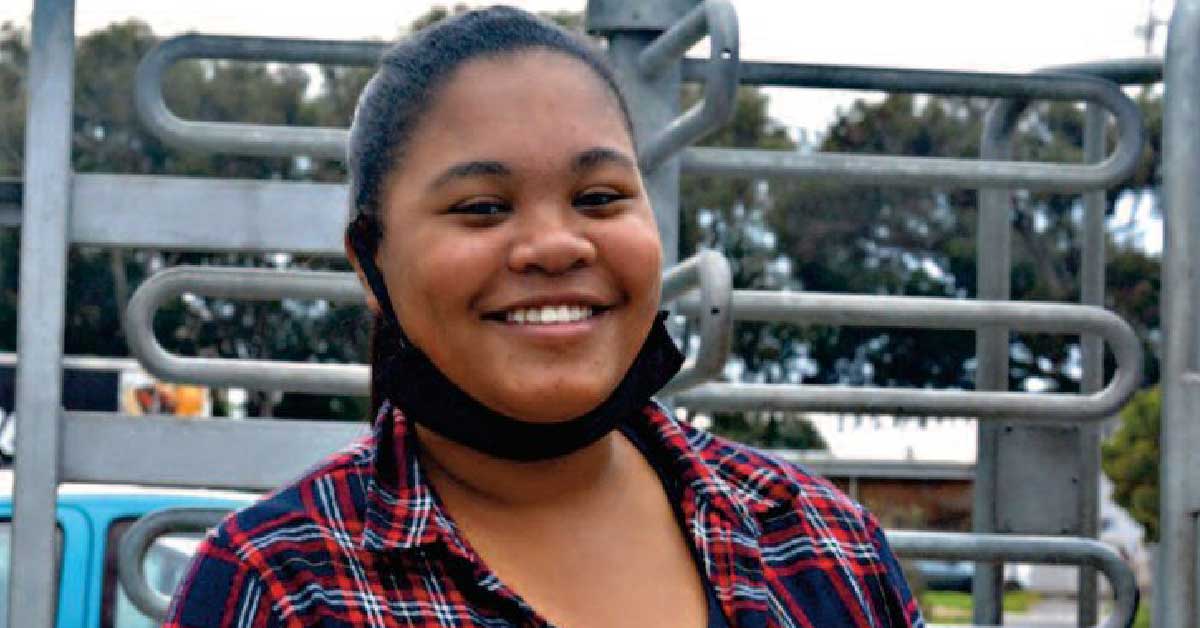 Young Cleo Daniels of Parkwood in Cape Town is among those who share their experiences in the Salesians’ “30 Stories in 30 Days” campaign. Cleo, who has had to deal with tough circumstances and the death of her baby brother in a gang shooting, is working to help others in her community during the coronavirus pandemic.

The campaign was originally launched in 2014 and showcases youth from the Cape Flats and their courageous personal stories of triumph which relate to the theme of “Victim to Victor”.

One such story is that of Cleo Daniels, 16, who learnt a valuable life lesson after a sudden and violent death of a family member in front of her house.

Cleo lives in the Parkwood neighbourhood with her parents and two elder siblings, a sister who is 12 years older and a six-years older brother. She describes her family life as always being emotionally charged.

“We always had food, but my parents often argued about money. My father gambles and drinks a lot and used to abuse my mother physically and verbally. When I was small, my brother and I used to run in the room, and I would cry because I could do nothing about it. It used to make me feel very sad,” she said.

The arrival of her younger brother was a blessing in her life.

“I was six years old and I did not have friends because I spent my days at home. My playmate was a cat, so when my mom told me that she was going to have a baby I got so excited.

“At that time, I did not know how babies were made, so every time my mom returned home from a clinic appointment I would run to look inside her bag. I was convinced that one day my baby brother would be in there,” Cleo recalled.

She and her new brother Ezra were very close. He became her best friend: “We loved each other and we had fun together. In the mall, I always needed to run after him because he couldn’t stand still. I used to tell him, ‘When you grow up I’m going to buy you a bicycle.’”

Violence was familiar to Cleo since Parkwood is the scene of regular and violent gang fights.

“There’s a lot of shooting and gang fights, Parkwood is a dangerous place. I would be standing outside and a whole gang would run past to shoot other members of the gang,” she explained.

Her parents insisted she stay indoors most of the time, to avoid getting caught in the crossfire.

That all changed on a Sunday afternoon in September when Cleo was 13 years old.

They didn’t hear the gunshot but her older brother came running inside shouting: “Ezra got shot and he is laying outside.”

For Cleo, that moment felt like a dream. “We ran outside where everyone was gathered on the road and I saw him lying there in a pool of blood—how could he have bled that fast? I didn’t go close enough to see if his eyes were open but my mother said his eyes were open and she kept his hand in hers, while he was taking his last breath,” she recalled.

“I couldn’t go close. I was crying and someone was hugging me. They were scared I was going to faint, I was shouting that he can’t leave and that I need him. “

Cleo was taken inside the house to drink sugar water before she went into shock.

“My brother was inside the room on his knees, crying and praying. I also prayed to God to save him, I said, ‘I will listen to you, I will do anything, I will go to church, please just let him live.’”

Outside, Ezra’s parents did not leave his side.

“The ambulance came after a few minutes. They were quick, but they couldn’t save him. They covered him with a white cover and they took pictures because it was a crime scene.”

The next few days and weeks were a blur for Cleo.

The bullet that hit Ezra was intended for a gang member who was in the road at the same time the little boy was playing soccer. It was a drive-by shooting.

A court case followed the shooting, and the perpetrators are all currently in prison.

Despite the pain of her loss, Cleo has come to terms with her little brother’s death.

“At first, I went to church so that I could get to go to heaven to see Ezra one day, but after going more and more, it actually assisted me to find peace. It helped me to cope with the pain,” she said.

“As time went by, it didn’t hurt me that much anymore. I am still sad that I will never be able to buy him a bike or see us growing up together, but I know he is good in heaven, and that makes me smile,” she said.

“I forgave the people who shot Ezra, I didn’t want to hate them for that. I do blame them for killing my baby brother, but I don’t have hate in my heart for them. We are all sinners, so we must forgive one another.”

Service to the poor

The Covid-19 pandemic sweeping the world has thrown Cleo a curveball like so many others.

“It’s really tough sometimes because you have to stay in the house all day and you always have this fear, like, ‘What if your family members get it?’ I don’t have a fear for me, but my family members go to work and they go places,” she said.

“My mom and my dad are already old and my dad already had problems with his heart and lungs and stuff, so that’s hard for them. I’m always worried about them, but I do find comfort in my prayers. I trust things will be okay.”

While the lockdown regulations have been challenging, Cleo has joined a community effort to hand out sandwiches to those in need.

“What motivated me to help is that every day I sit in the house and I have nothing to do, and there are people who don’t have food,” she said.

“It’s nice to help others and to see their joy when you are giving them food. You can see the relief that at least they have something to eat tonight and food for their children. It warms my heart when they say thank you and smile. Their smiles motivate me to continue volunteering,” Cleo said.