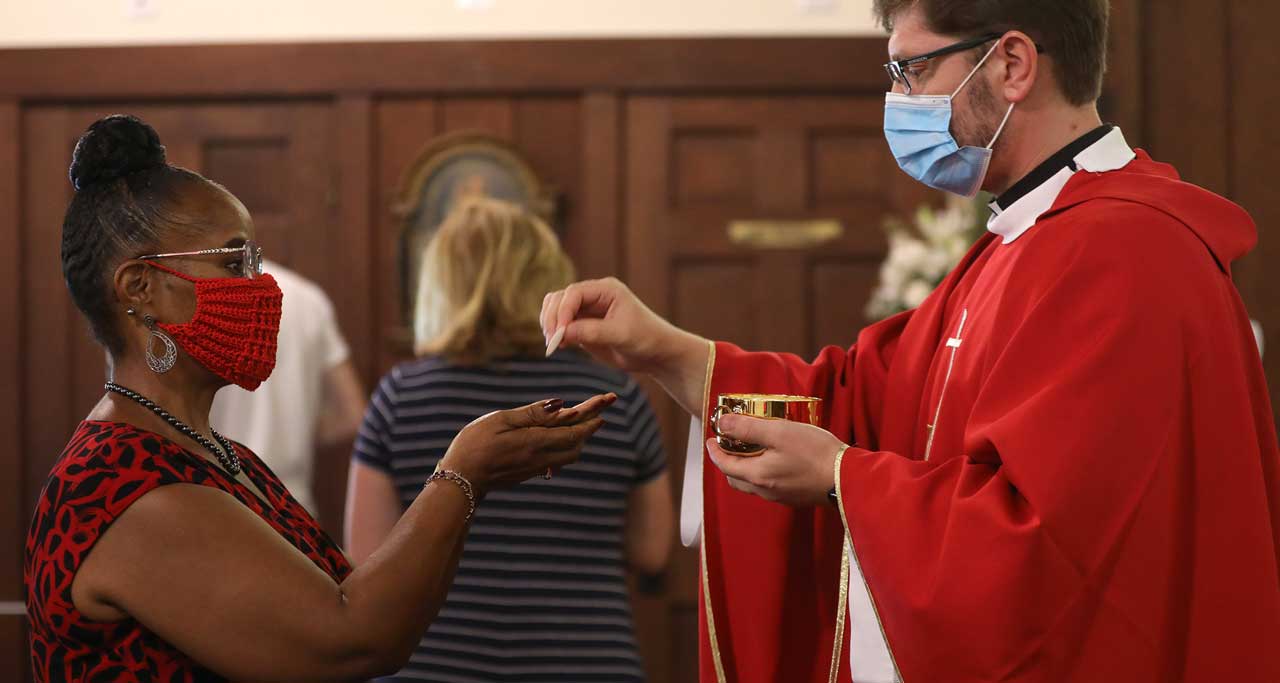 Dioceses around the country are now making plans to reopen churches, but agree that the right time for that is not just yet.

The Southern African Catholic Bishops’ Conference (SACBC) welcomed President Cyril Ramaphosa’s May 26 statement that religious services would be permitted to resume under Level 3 lockdown as of June 1, but the conference has no authority to impose a national policy for the dioceses in the Southern African Church.

The decisions of when and how to reopen is up to individual dioceses.

Religious leaders have been recognised as essential workers for the purpose of spiritual counselling and leading worship.

“The importance of opening the churches will assist our people, many of whom have experienced emotional and spiritual distress during the lockdown,” said SACBC spokesman Archbishop William Slattery, retired of Pretoria, in a statement.

“People have felt abandoned by the Church community in their moment of grave need. The stress of feeling isolated leaves the individual with a weakened immunity. A sense of deep depression due to spiritual longing is also a suffering and a disease.”

The SACBC fully endorsed the precautionary measures to avoid infections, and counselled that should individual communities represented by their priests and parish councils feel unable to meet these precautions, they must keep the churches closed.

“Our churches must avoid every risk which might expose worshippers to infection,” Archbishop Slattery said. South Africa’s most populous archdiocese, Johannesburg, will not be opening its church doors immediately, Archbishop Buti Tlhagale said in a statement.

“All our churches and buildings must be ‘safe places’ and the parish priest must take responsibility on behalf of his parish to ensure that the [safety] recommendations are met,” he said.

The dispensation from the obligation to attend Mass remains in effect for those who feel uncomfortable or unable to return once churches can reopen. At that point, because of the restrictions on the numbers of people who may gather, those who can’t attend Sunday Mass may fulfil their obligation by attending a weekday Mass.

Archbishop Tlhagale said that the reception of Communion under one species would continue as was the case just before the lockdown, with no kneeling at the altar rail, social distancing provisions, and reception only in the hand.

He added that priests would not wear gloves for the distribution, as hand sanitiser is effective against the virus.

“It must be made clear that attending the celebration of Mass in a church is a decision each person must make without risking themselves and others.”

Those at high-risk should be encouraged to be cautious and are advised to stay at home, Archbishop Tlhagale said.

Cardinal Wilfrid Napier of Durban in a letter to his archdiocese wrote that President Ramaphosa’s announcement had taken the Church by complete surprise, saying Church leaders had asked only to be included in consultation processes.

The day before the announcement, the cardinal had called for churches either to be allowed to open or for the government to offer relief funding to help religious leaders.

Speaking on behalf of the KwaZulu-Natal Christian Council, Cardinal Napier said he could not understand why factories, schools and businesses were allowed to operate, while churches had to remain closed. “We need to have some kind of explanation as to why are we not allowed to operate,” he said.

Addressing his archdiocese, Cardinal Napier acknowledged that “none of us knows enough at this stage to decide if it is safe for us to reopen. For one thing, we don’t know the conditions under which our parishioners are living and therefore their Covid-19 status,” Cardinal Napier said.

Therefore churches in the archdiocese will remain closed until the red-flag status has been officially removed in Ethekweni.

“In the meantime, every parish priest in consultation with their parish leadership (PPC) should study the guidelines that were circulated and begin to prepare their own set of parish guidelines so when they are able to open they will be ready and able to do so.”

He proposed that every priest, deacon and lay leader should undergo the basic training which the KwaZulu-Natal MEC for health has offered to provide in each region of the province. In the archdiocese of Cape Town, discussions on reopening churches for public worship are still underway, and the date of reopening is yet to be decided.

There are many factors to consider about which churches will reopen, for example, in hotspots, said Archbishop Stephen Brislin. “We are requesting that priests make all the necessary preparations before churches reopen,” he said.

“There is a lot that needs to get done before we can recommence, and everything must be in place.” Livestreaming of Masses, reflections and devotions will continue in the interim.

“We do find it important to begin the process of reopening for public worship, but it must be taken slowly and deliberately,” Archbishop Stephen Brislin said.

“A phased-in approach has to be taken, whether churches open now or in the months to come. Since we have the necessary permission — with all the restrictions — I believe we can begin, bearing in mind the above,” he said.

The South African Council of Churches (SACC) has published guidelines for its member churches and has proposed a 4- to 12-week preparation period — as late as the last week of August—for all churches to be able to function safely.

“Churches will need to pay special attention to the needs of poor congregations, which mostly serve communities with no running water and no easy access to sanitiser, to meet the requirements of these operational standards,” said Bishop Malusi Mpumlwana, general-secretary of the SACC, of which the Catholic Church is a member.

Despite government giving the green light for religious gatherings, a number of religious organisations have opted to remain closed.

The Muslim Judicial Council also discouraged the reopening of mosques under Level 3. “Only those masajid should open up within the limits allowed by Level 3 regulations that are able to afford, implement and rigorously enforce safety and sanitary procedures,” the council said. It noted that “within our hospitals and health facilities, despite the implementation of stringent precautionary measures, there have been over 1 000 infections of health workers, including doctors and nurses”.

Chief Rabbi Warren Goldstein, in a letter to the South African Jewish community, said synagogues in South Africa would also remain closed until they can reopen safely and comply with safety regulations. “There’s a lot at stake — and it’s not something that can or should be rushed,” he said.

For those places of worship that do reopen, the following rules under the new Level 3 regulations apply: