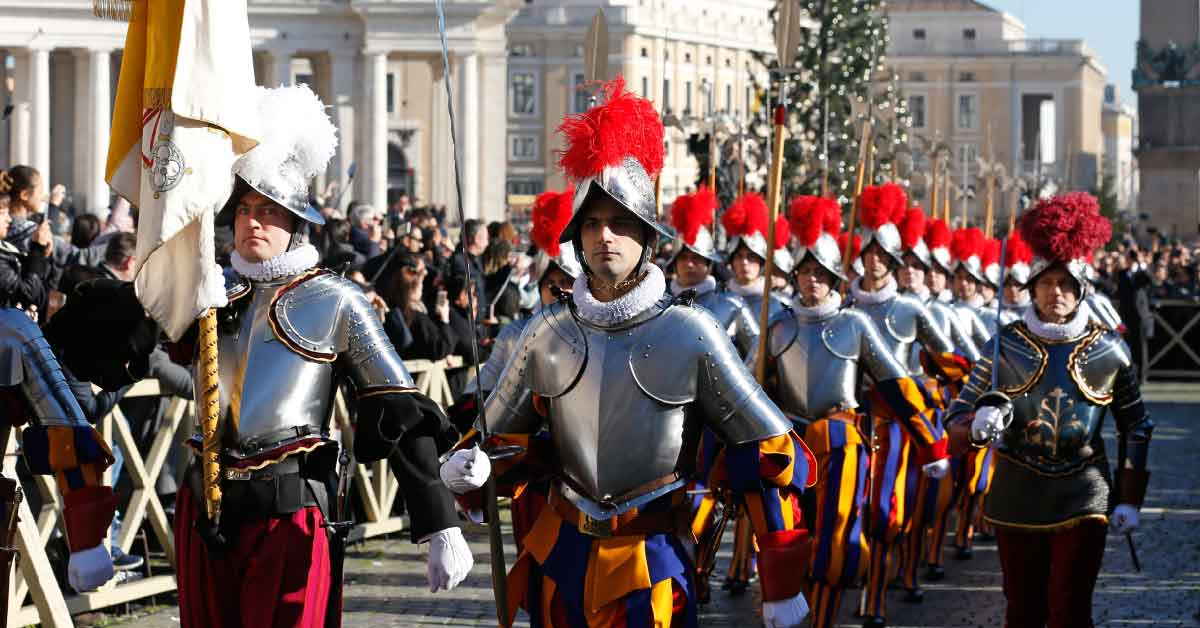 Swiss Guards are seen in a file photo arriving in St. Peter’s Square to attend Pope Francis’ Christmas message and blessing “urbi et orbi” (to the city and the world) at the Vatican. Tasked with protecting the pope even at the cost of their own lives, members of the Swiss Guard are not just highly trained specialists in security and ceremonial detail, they also receive extensive spiritual formation, the guard’s chaplain said. (CNS photo/Paul Haring)

By Carol Glatz – Tasked with protecting the pope even at the cost of their own lives, members of the Swiss Guard are not just highly trained specialists in security and ceremonial detail, they also receive extensive spiritual formation, the guard’s chaplain said.

New recruits, who must have already completed basic training in the Swiss army, must also strengthen their understanding of the Gospel and its values, said the chaplain, Father Thomas Widmer.

In an interview with the Vatican newspaper, L’Osservatore Romano, Father Widmer spoke about the kind of training new guardsmen receive starting each summer.

“It is important the recruits can start their service well-prepared,” he said.

New recruits, who are normally sworn in May 6 during a special ceremony – postponed to Oct. 4 this year because of the COVID-19 pandemic – are currently attending summer school at the Vatican, he said.

In the fall, they will go to a military camp in Switzerland, where they will receive more specialised training in tactics and security as part of their job in protecting the pope, he said.

“But it is fundamental that such a task takes root and deepens in their heart,” Father Widmer said.

This is why faith formation is so important, he said. “They are first of all men who are loved and wanted by God with a mission that is to be discovered ever more deeply.”

“My goal as a chaplain is to always promote their personal experience with Jesus – to encounter and follow him as a role model of serving and giving, in fact, he gives a new quality to their life,” he said.

The spiritual formation he seeks to offer is to strengthen “the foundations of our faith and Christian life,” he said.

Asked about how the guard, made up of 135 soldiers, has operated during the pandemic, Father Widmer said the only change has been the requirement for guards manning all the entrances into Vatican City State to wear face masks and to do a temperature check on everyone who enters the Apostolic Palace.

Their ceremonial duties, he said, have been greatly reduced because of the pope receiving fewer visitors in formal audiences and leading fewer public ceremonies and events.