Cardinal Pell, Describing Prison, Says He Knew ‘The Lord Was With Me’ 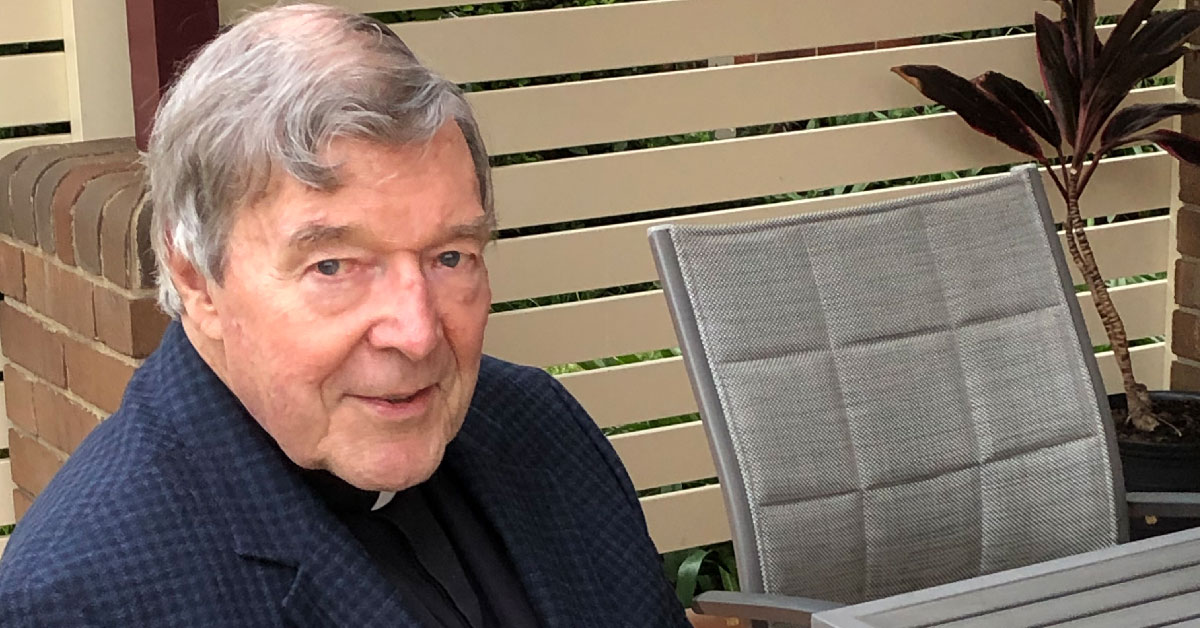 Australian Cardinal George Pell is seen in a file photo on the grounds of the Seminary of the Good Shepherd in Sydney. (CNS photo/courtesy Archdiocese of Sydney)

“From the first night, I always had a breviary (even if it was out of season), and I received Holy Communion each week,” Cardinal Pell wrote in an essay for U.S. Catholic magazine First Things. The story was reprinted in The Australian.

He said that on five occasions he attended Mass, even though he was unable to celebrate and noted that he “particularly lamented” this at Christmas and Easter.

“My Catholic faith sustained me, especially the understanding that my suffering need not be pointless but could be united with Christ Our Lord’s. I never felt abandoned, knowing that the Lord was with me – even as I didn’t understand what he was doing for most of the 13 months.”

Cardinal Pell confirmed media reports at the time that he was in solitary confinement for 13 months from his sentencing in March 2019 until his April 2020 release; he had been sentenced to a term of six years with at least three years and eight months without parole.

Being held in a single cell is typical for child sex offenders in the Australian prison system, as they are deemed as being at high risk of violent retribution from other inmates.

“I was threatened in this manner only once, when I was in one of two adjacent exercise areas separated by a high wall, with an opening at head height,” Cardinal Pell wrote, adding that as he walked around the prison’s perimeter “someone spat at me through the fly wire of the open aperture and began condemning me.”

Cardinal Pell, former head of the Vatican Secretariat for the Economy, described the legal actions against him as “an expensive charade.” He criticized the Australian media as “bitterly hostile” but “with splendid exceptions.”

“Prisoners from many jails wrote to me, some of them regularly,” Cardinal Pell wrote, claiming that one “told me that it was the consensus among the career criminals that I was innocent and had been ‘stitched up.'”

While Cardinal Pell has had his criminal convictions expunged, he remains the subject of a number of civil actions in Australia. The legal test for a criminal conviction is beyond reasonable doubt; civil cases use the lesser test of the balance of probabilities.

“We are currently investigating a small number of compensation claims that relate to allegations of sexual abuse involving George Pell,” Melbourne lawyer Vivian Waller told Catholic News Service. She said her firm was currently acting in approximately 400 civil claims for compensation against Catholic clergy in relation to allegations of child sexual abuse that are at various stages, from investigation to litigation.

A range of redress schemes have been instituted in Australia, including the Melbourne Response for the Archdiocese of Melbourne, set up by Cardinal Pell, and the Towards Healing process, set up in 1996 to cover the entire Australian church with the exception of Melbourne. More recently, the National Redress Scheme was set up by the Australian government in tandem with scores of institutions has included the financial backing of all Catholic dioceses and religious orders where children have been sexually abused over the decades.

“The National Redress Scheme, set up in the wake of the Royal Commission, is considered by many survivors to be an option of last resort, because it is capped at AU$150,000 and makes no provision for past medical expenses, future medical treatment nor past or future loss of earnings flowing from the abuse,” Waller said. “The combination of these three factors mean that survivors are preferring to run litigation where possible.”

Priest sees Progress on Abuse, but also Resistance in some ‘Quarters’