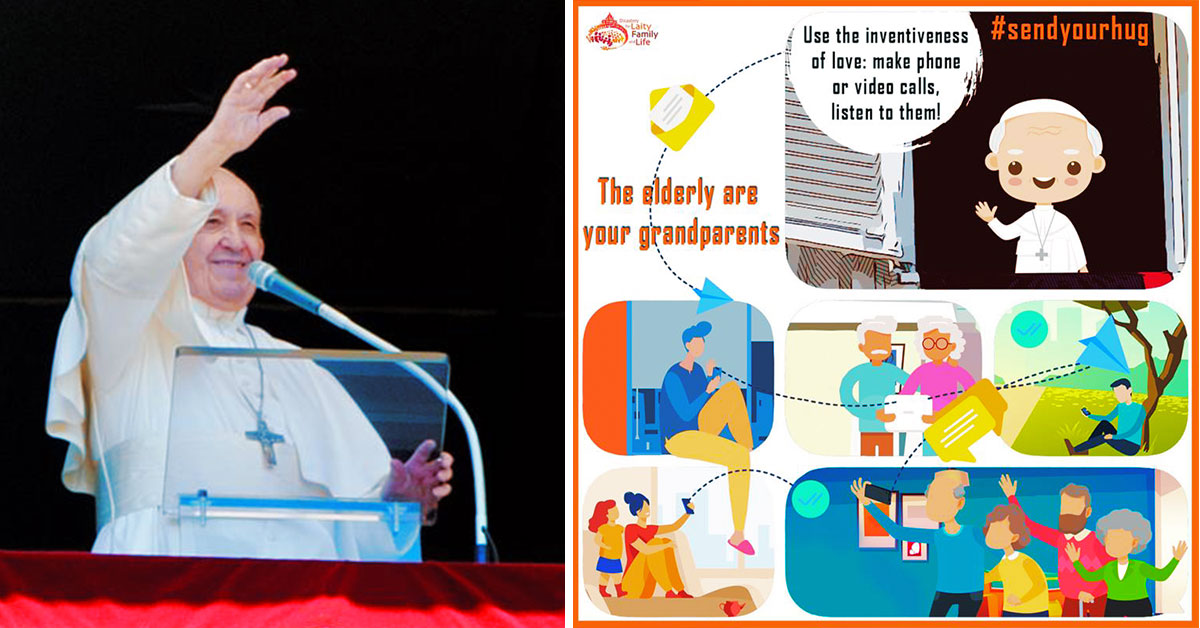 By Carol Glatz – Pope Francis called on young people to reach out to their grandparents or the elderly who may be lonely or on their own.

“Do not leave them by themselves,” he said after praying the Angelus with visitors in St Peter’s Square July 26.

“Use the inventiveness of love, make phone calls, video calls, send messages, listen to them and, where possible, in compliance with health care regulations, go to visit them, too. Send them a hug,” he said before leading visitors in giving a big round of applause for all grandparents.

The pope made his remarks on the memorial of Ss Joachim and Anne – Mary’s parents, Jesus’ grandparents and the patron saints of grandparents.

Pope Francis said he wanted to mark the day by inviting all young people to make a concrete “gesture of tenderness toward the elderly, especially the loneliest, in their homes and residences, those who have not seen their loved ones for many months” because of rules in place to curb the spread of the coronavirus.

In part, because of such regulations in place, he asked young people to be creative and inventive in finding ways to show they care while respecting current directives.

Grandparents and the elderly are “your roots” and having a strong bond or connection with one’s roots is important, he said, because “an uprooted tree cannot grow, it does not blossom or bear fruit.”

Because the pandemic has affected older people especially hard, the Dicastery for Laity, the Family and Life launched a campaign July 27 after being inspired by Pope Francis’ invitation to reach out safely and creatively to the elderly.

“It is possible to reduce the isolation felt by elderly people while also strictly observing health guidelines for Covid-19,” it said in a statement, adding that “respecting social distancing rules does not mean accepting a destiny of loneliness and abandonment.”

Inspired by the pope’s words after the Angelus, the dicastery decided “to launch a campaign called, ‘The elderly are your grandparents,'” which encourages young people around the world “to do something that shows kindness and affection for older people who may feel lonely.”

It said it has been hearing about the many ways people have been finding creative ways to draw the church community closer to those who are older and lonely, including serenading residents in retirement homes.

It asked people continue to share their efforts and ideas on social media with the hashtag #sendyourhug and the dicastery would repost some of them on their platforms @laityfamilylife.

“Our invitation to young people is to reach out to the loneliest elderly people in their neighbourhood or parish and send them a hug, according to the request of the pope, by means of a phone call, a video call or by sending an image. Wherever possible or whenever the health emergency will allow it, we invite young people to make the embrace even more concrete by visiting the elderly in person,” it said.

Pope Has Set Tomorrow as a Special Day to Honour, Study, Share the Bible