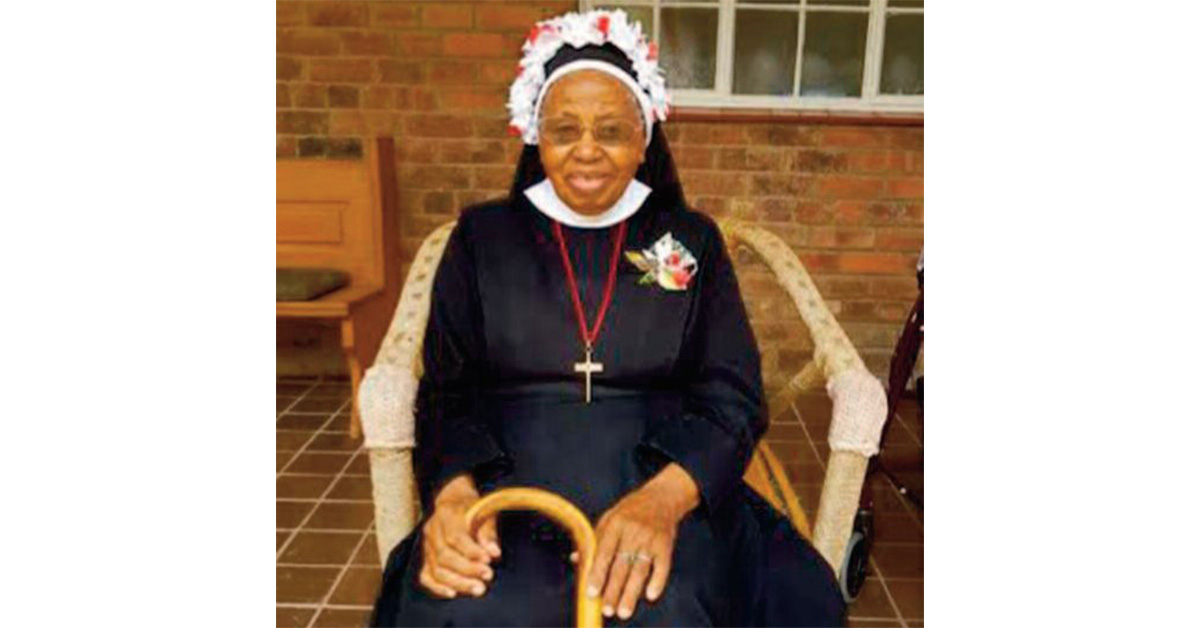 The daughter of Julius and Tharsilla Mtimkulu, she was born on November 26, 1918, at Maria Telgte, Mkhoba’s location, in the district of Kokstad.

Maria Telgte was Sr Bernadette’s first school. In 1938, she joined a group of students which opened the secondary school at Lourdes.

In 1940 she entered the teachers’ training college at Mariazell, completing her course in 1942.

In 1944, because of the prospect of entering the convent, Sr Bernadette was transferred to the industrial school to teach there.

She was under the care of Sr Imeldis Mülder, who later was to be her superior-general of the Missionary Sisters of the Precious Blood. Sr Bernadette said that for her, as a future candidate for religious life, it was a great grace of God to be looked after by Sr Imeldis.

In 1947, Sr Bernadette was received as a novice in the Precious Blood congregation at St Patrick’s, about 10km from Mthatha in the Eastern Cape. She made her first profession on January 6, 1949.

Soon after, she was transferred to Mariazell Teachers’ Training College, becoming the first African Sister there.

She understood this to be the will of God as revealed to her by Abbot Francis Pfanner, founder of the Precious Blood Sisters, and ventured into the unknown believing the transfer to Mariazell was by God’s order.

In 1962, she made her final commitment to God at Glen Avent Convent in Mthatha.

The same year, she became principal at St Michael’s mission in Indonyane. In 1964 she was transferred to St Francis’ Training College in Mariannhill.

In 1970, Sr Bernadette was transferred back to Mariazell, to St Michael’s.

In 1981 she became principal of the Cwele mission school, as well as the Sister in charge of the Precious Blood community there.

In 1986, she retired from teaching. This afforded her the opportunity to give instructions to the catechumens until she retired in 1989.

Even after turning 100, Sr Bernadette was still able to do embroidery on tablecloths to help sustain the CPS province.

A week before her death on July 5, she was hospitalised at St Mary’s Life Hospital in Mthatha for oxygen therapy.

She was laid to rest on July 11, with Bishop Sithembele Sipuka of Mthatha presiding at her funeral Mass.