Sr Tshifhiwa Munzhedzi OP: I Am Looking Forward to My New Job 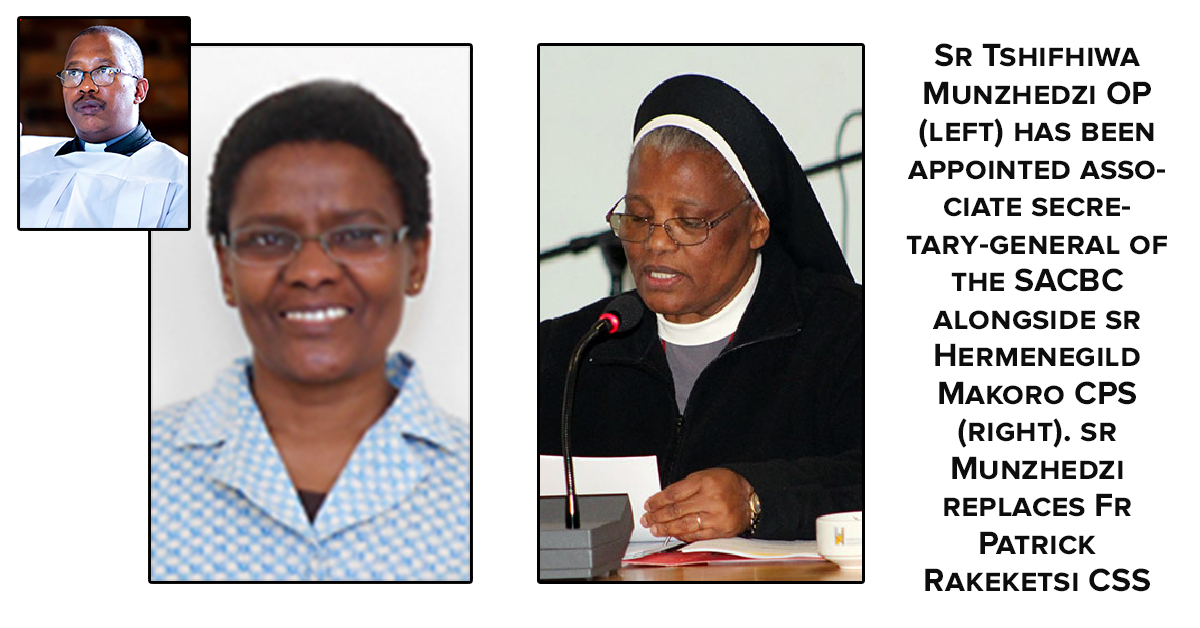 In what may be a world-first, two women will be running the secretariat of the Southern African Catholic Bishops’ Conference (SACBC), as of July 1.

This comes after Dominican Sister Tshifhiwa Munzhedzi was appointed the new associate secretary-general to succeed Stigmatine Father Patrick Rakeketsi, who after six years in office will be deployed back to his congregation.

In her new role at the Pretoria-based secretariat, which coordinates the running of the SACBC, Sr Munzhedzi will work alongside Precious Blood Sister Hermenegild Makoro, the secretary-general since 2012.

Sr Makoro had been associate-secretary general from 2005-12. She was the second woman to hold that position, after Holy Family Sister Brigid Flanagan in the 1980s.

Before her appointment, Sr Munzhedzi served as the promoter for the cause of canonisation of Bl Benedict Daswa in Tzaneen.

“At the moment, I am not sure that I can express what I am feeling. I have been busy with some projects in the Bl Daswa promotion work and have not yet had time to reflect or let it sink in what I am moving on to,” the King Williams Town Dominican told The Southern Cross.

“At the moment, I am just looking forward to arriving [at the SACBC headquarters, Khanya House]. Maybe then I will be able to process what is happening,” Sr Munzhedzi said on Monday.

She said that initially she had been approached by her congregational leader about the appointment to the SACBC position and was asked to pray about the request.

“This is what I did, and I also asked my community to be in partnership with me in prayer. I also took time to consult with people about me leaving the work I was doing and taking this new proposed job,” Sr Munzhedzi explained.

Although she is looking forward to her new position she will miss her work, and especially the people in Tzaneen.

“I will miss their faith and deep trust in God. They taught me gratitude for simple things, being able to recognise God in everyday events, and express gratitude to God for that,” she said.

For Fr Rakeketsi, it has been a “wonderful experience” to serve the Church in its central administration.

“I have learnt a lot about the Catholic Church and its leadership, especially in these uncertain times,” he said.

His biggest highlight is having helped bring the new Pastoral Plan to completion, with its launch in Soweto in January.

“Upon the completion of consultation in the dioceses, the Council for Evangelisation worked hard to listen, study and discern the way forward for the Church. The work ahead is to implement the Pastoral Plan with pastoral programmes in the parishes,” said Fr Rakeketsi.

He also recalled the establishment of Caritas as the ordered structure of charity in the local Church as a highlight.

While still in the infant stage, Caritas will grow to complement the programmes of the new Pastoral Plan.

“In the 1980s the Church was faced with the challenge of apartheid. In the 1990s and early 2000s the Church responded remarkably to the scourge of HIV/Aids,” Fr Rakeketsi said.

“The challenge in the next decade is undoubtedly migration and human mobility. With the establishment of Migrants & Refugees Offices in the dioceses, the bishops are beginning to streamline migration as one of the major pastoral challenges of the conference,” he said

“I wish Sr Tshifhiwa all the best, and that the Holy Spirit will grant her wisdom and fortitude in her new responsibility as the associate secretary-general,” Fr Rakeketsi said.