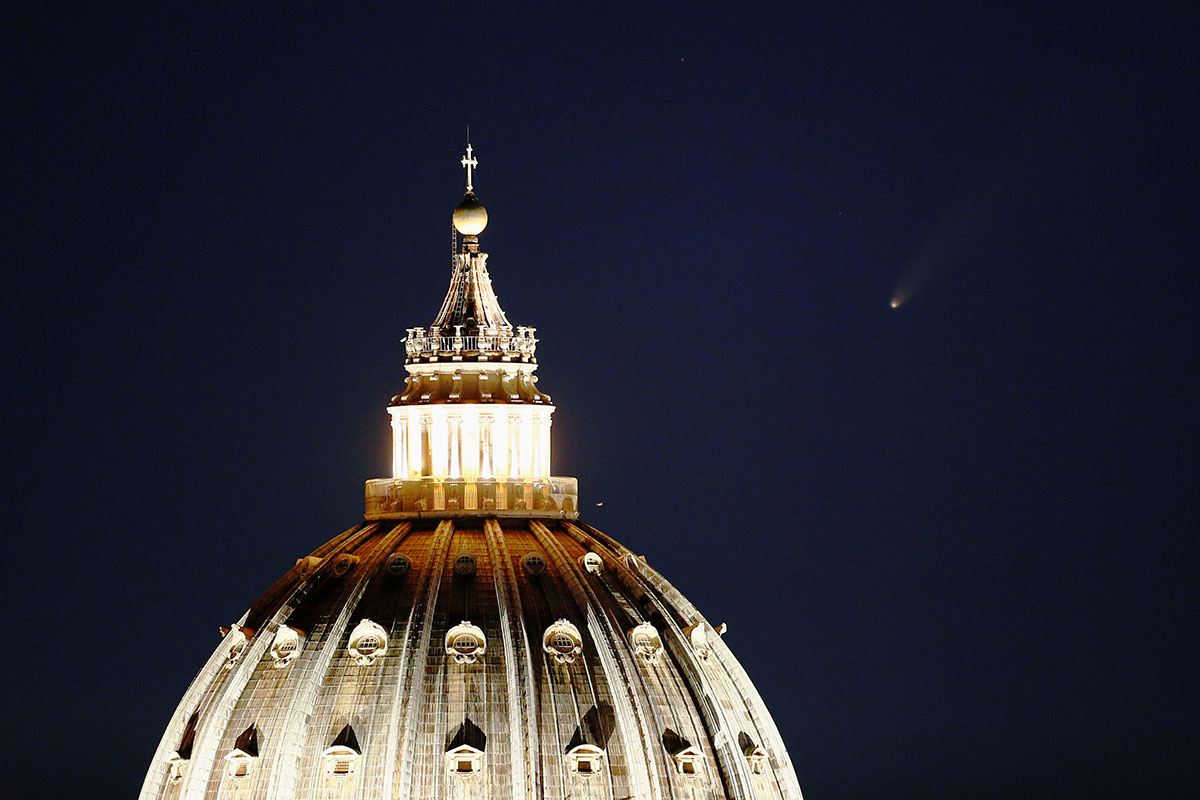 The comet “Neowise” is seen in the sky behind the dome of St. Peter’s Basilica in Rome July 13, 2020. (CNS photo/Guglielmo Mangiapane, Reuters)

By Cindy Wooden – Renewing the membership of the Vatican Council for the Economy, Pope Francis named six women to the previously all-male board that oversees the financial operations of all Vatican offices and entities.

Statutes for the council, approved by the pope in 2015, say the body will have 15 members: eight cardinals or bishops and seven laypeople, each serving a five-year term.

The original seven lay members were all men with experience in business, finance or government.

The six women the pope named to replace them August 6 have a similarly high profile and background. The six are: Charlotte Kreuter-Kirchhof, a German professor of law; Marija Kolak, president of Germany’s national association of cooperative banks; Maria Concepcion Osacar Garaicoechea, a Spaniard and founding partner of the Azora Group and president of the Board of Azora Capital and Azora Gestion; Eva Castillo Sanz, former president of Merrill Lynch Spain and Portugal; Ruth Maria Kelly, a former banking executive, former member of Parliament and former secretary of education in Great Britain; and Leslie Jane Ferrar, former treasurer to Prince Charles.

The only layman named to the council was Alberto Minali, a former executive at Italian insurance companies.

According to Vatican News, Pope Francis renewed German Cardinal Reinhard Marx’s mandate as “cardinal coordinator” of the council. The cardinal, who is archbishop of Munich and Freising, also serves on the pope’s international advisory Council of Cardinals.

According to the statutes, the council is “responsible for supervising the administrative and financial structures and activities of the dicasteries of the Roman Curia, of the institutions connected to or referring to the Holy See and of the administrations” falling under the governorate of Vatican City State.

Pope: Conversion Is A Daily Battle Fuelled By Grace
Share