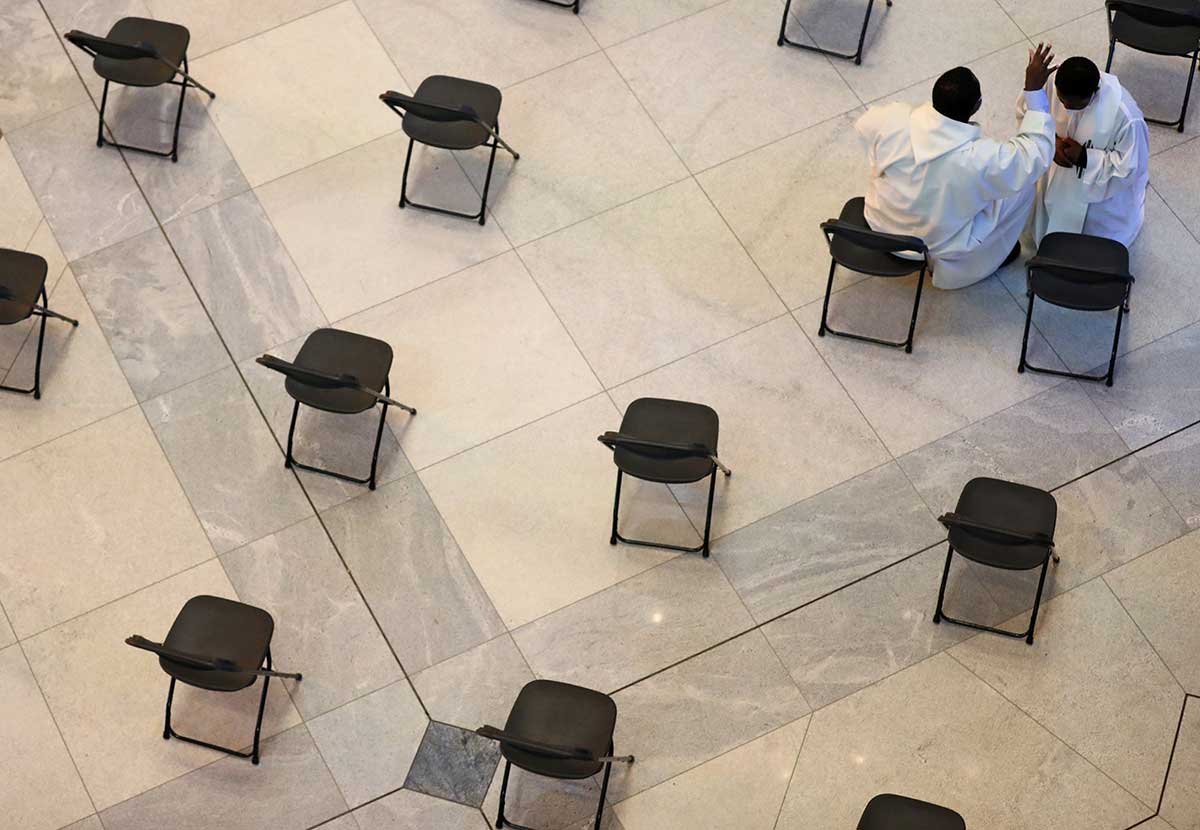 A priest blesses another clergyman during confession in the Basilica of the Holy Family in Barcelona, Spain, June 19, 2020, after it reopened following the relaxation of restrictions during the COVID-19 pandemic. (CNS photo/Nacho Doce, Reuters)

A new law requires priests in the state of Queensland to break the seal of confession to report child sex abuse to police or face three years in jail.

The law was passed by Queensland Parliament Sept. 8. It had support from both major parties and was opposed by the Catholic Church.

One Queensland prelate, Bishop Tim Harris of Townsville, tweeted a link to a story on the passage of the new law and said, “Catholic priests cannot break the seal of confession.”

The new law was a response to recommendations from the Royal Commission Into Child Sexual Abuse, which uncovered and documented the tragic history of abuses in religious and secular organizations, including Catholic-run schools and orphanages across the country. South Australia, Victoria, Tasmania and the Australian Capital Territory have already enacted similar laws.

One recommendation from Royal Commission was that the Australian Catholic Bishops’ Conference should consult with the Holy See, and “clarify whether information received from a child during the sacrament of reconciliation that they have been sexually abused is covered by the seal of confession” and also whether “if a person confesses during the sacrament of reconciliation to perpetrating child sexual abuse, absolution can and should be withheld until they report themselves to civil authorities.”

But in a note approved by Pope Francis and published by the Vatican in mid-2019, the Apostolic Penitentiary affirmed the absolute secrecy of everything said in confession and called on priests to defend it at all costs, even at the cost of their lives.

“The priest, in fact, comes to know of the sins of the penitent ‘non ut homo sed ut Deus’ – not as a man, but as God — to the point that he simply ‘does not know’ what was said in the confessional because he did not listen as a man, but precisely in the name of God,” the Vatican document said.

“A confessor’s defence of the sacramental seal, if necessary, even to the point of shedding blood,” the note said, “is not only an obligatory act of allegiance to the penitent but is much more: it is a necessary witness – a martyrdom – to the unique and universal saving power of Christ and his church.”

The Vatican made reference to that document in observations on the Royal Commission recommendations. The Australian Catholic Bishops’ Conference released the response in early September.

“Even if the priest is bound to scrupulously uphold the seal of the confessional, he certainly may, and indeed in certain cases should, encourage a victim to seek help outside the confessional or, when appropriate, to (encourage the victim to) report an instance of abuse to the authorities,” the Vatican said in its observations.

“Concerning absolution, the confessor must determine that the faithful who confess their sins are truly sorry for them” and intend to change. “Since repentance is, in fact, at the heart of this sacrament, absolution can be withheld only if the confessor concludes that the penitent lacks the necessary contrition,” the Vatican said.

Brisbane Archbishop Mark Coleridge, president of the Australian Catholic Bishops’ Conference, has affirmed the church’s commitment to protecting children and stopping abuse, but has said that breaking the confessional seal would “not make a difference to the safety of young people.”

In a formal submission to the Queensland Parliament, Archbishop Coleridge explained that legislation stripping the seal made priests “less a servant of God than an agent of the state,” reported The Catholic Leader, newspaper of the Archdiocese of Brisbane. He also said the proposed legislation raised “major questions about religious freedom” and was based on a “poor knowledge of how the sacrament actually works in practice.”

“The requirement and, quite frankly, the moral obligation to report concerning behaviours toward children applies to everyone in this community,” he said. “No one group or occupation is being singled out.”

Pope: Fear and Uncertainty Lead to a ‘Do-it-Yourself’ Religion
Share