Our Call to be Prophetic in Time of Crisis 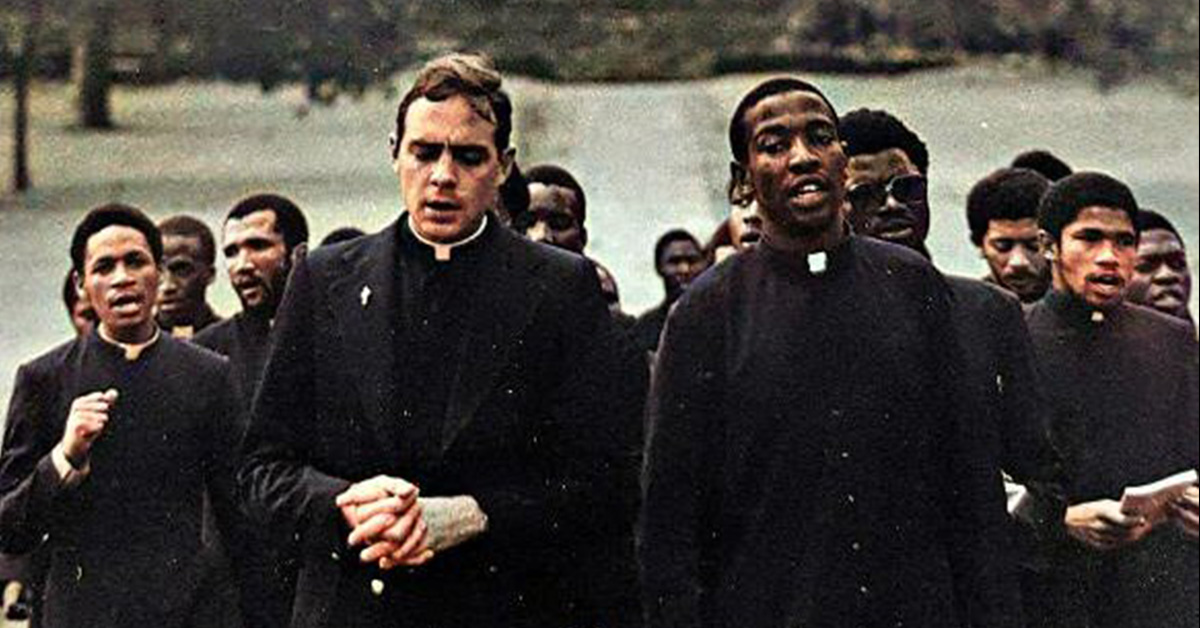 Seminarians of St John Vianney in Pretoria march on the Union Buildings in the 1980s, giving prophetic witness in the struggle against apartheid. (Photo colourised)

In crisis, those who lead in the Church are called to be prophetic in their ministry. Fr Paddy Noonan OFM explains how.

When your priestly, episcopal or religious service to humanity begins to be pressed beyond the limits of the familiar, then you are likely to behave, to think and to respond differently.

You may be jolted into questioning the values of your previous daily routine, values that once gave your life its meaning.

The Bible is full of these situations, especially in the lives of the prophets, who were so often asked to go far beyond, indeed, to break away from, their own previously comfortable lives.

Something else can happen to you too. The deeper you’re sucked into a convulsing human drama, the more real you seem to become. The more you face yourself alone. The more you interpret and reinterpret your vocation.

I think nowadays they call it a reality check. It affects pastoral ministry, too. You can easily find yourself in a no-man’s-land of Church ministry and practice.

For example, in critical times of major social threat or change, should priests remain in their church rectories and leave “politics” to the laity? At what point must we realise that it’s time to act together?

When there is a tragic death, should we insist on ministering to the deceased of our own denomination only? Or should we use this as an occasion to preach our own Church dogmas, deities and doctrines?

Should we be unduly concerned about conformity, clerical decorum or the precision of rubrics when carrying out our duties to the troubled people of God in life-threatening circumstances?

There is nothing in pastoral manuals about “crisis ministry”. When great human suffering strikes the parish or diocese and bangs urgently at grand presbytery doors what do we do?

Traditionally, ministers and priests of the world are obliged to discern prayerfully what steps to take in any urgent pastoral situation. That’s my own experience.

In the time of Christ I’m not sure who did the job of explaining the weather. Was it the astrologists or just some gifted people?

But somebody did weather forecasting for the farmers of that time. It was always like that. Nature had to be understood. (See Pope Francis’ encyclical Laudato Si’).

Like South African weather people, ancient weathermen would have been much appreciated for their forecasting abilities especially in the rural communities of Christ’s time.

Jesus couldn’t help but notice their concern for the elements and typically one day he brought it into his teaching. He was cross with the crowd, possibly with some farmers, because, for all their religion, they were losing heart! They didn’t grasp the situation!

He thought they should have known better. He chastised them for not decoding, not reading, not discerning the signs of the times. They couldn’t see that times were a-changing. Something new was afoot. They didn’t see him as the greatest changemaker that ever lived.

Are we trying to interpret the present times? Or are we a veiled hindrance? Some of us are following conspiracy theories more bizarre than even The Da Vinci Code!

The following is an attempt to tease out some experiences of past ministry that took place, of necessity, in circumstances far beyond our control or imagination. It was during political unrest.

Lockdown also happened in South Africa in this period. And the clergy rallied, driven by prophetic voices that had been there, unrecognised or emerged only when crisis broke upon us.

It’s so important to recognise them at the right moment and not be diverted by jaded voices advocating traditional “prudence” even in abnormal times. The Holy Spirit, fortunately, doesn’t work that way.

Yes, during the uprisings in South Africa in the 1980s, we priests and ministers of all denominations did plan together; and together we prayed. We did take risks together; and we were arrested and taken to court together. Together we did fear the police and army, but together we never stopped trying.

As local Church leaders we were expected to be out there at the forefront, at the cutting edge of apartheid society where God, we knew from Exodus 3:7, was the one who sees the misery, hears the cries and knows the suffering of his people.

Looking back much later, when the dust had settled on a new South Africa, it was clear to me that the success of our “crisis ministry” was almost certainly due to the pastoral and ecumenical character of our initiatives.

The following discussion of emergency pastoral ministry is obviously not a blueprint for all situations. Pastors will share, analyse, pray, listen and risk their own local solutions.

The following are seven emergency ministries that worked during political shutdowns in South Africa.

Christian presence is so important in all situations of conflict even today.

During apartheid, especially in its final years when the system was unbundling and generally falling apart on the streets of South Africa, the ministry of pastoral presence took on a new meaning.

Ministers and priests constantly gathered community leaders together for crisis consultations, interpreting events daily with the people, organising community funerals after massacres and police killings, actively monitoring arrests, supporting treason trialists and generally being a public sign of hope and “shepherding” presence in the streets.

Monitoring and “mentoring” society from our Christian perspective drew Church people into a deeper spiritual togetherness, which has endured to this day.

Pope Francis vividly describes this ministry: “What is necessary is proximity: to embrace, kiss, touch, hug a son or a daughter. When the Church neglects this proximity, it is like a mother who communicates with her son [only] in a letter.”

Clearly the physical acts do not apply during the coronavirus crisis, but the point of proximity is important. New forms of radical ministry do apply; and are called for.

We were called upon during riots, in clashes between police and people, as a compassionate and symbolic presence after sudden massacres, for hospital visitation of the injured and wounded…

There was also a more subtle priestly ministry: that of convincing people that freedom was possible and that the present turmoil might be ultimately connected to it.

It implied a ministry of postulating a new order, in our case “regime change”—at a time when no one dared think that far ahead.

A feature of this ministry was that of guiding resistance and dissent into active non-violent action and passive resistance. It was a ministry of not just witnessing but opening the door to the beginning of the end of apartheid.

As pastors and priests we knew that this was the ultimate peace-building solution for our country, based on John 10:10: “I have come that you may have life, and have it to the full.”

A ministry of reconciliation! I remain convinced that the common pastoral decisions, actions and liturgies we undertook in the 1980s saved our townships, and the nation, from the bloodbath anticipated by the world media at the time of the first democratic elections in South Africa in 1994.

As I said, in all of this the word “ecumenism” wasn’t mentioned. Some churchmen or women didn’t even know what the word meant, and they didn’t care.

They didn’t come together because their Church leaders told them to, but out of human necessity, out of terrible need.

Fighting the common enemy, apartheid, was enough to bring the churches out into the streets. It became a living ecumenism, a ministry of ecumenism.

We were united by the spirit of Christ, who still crosses pastoral boundaries in his compassion for the underdog, the brokenhearted, the sick, the outsiders and the sinners.

It has been estimated that by 2025 most Christians will be living in the southern hemisphere and will be starting to determine the future of Christianity. Perhaps it is from there, too, that future ecumenism and interfaith dialogue will find new hope and new creative impetus.

Millions of South Africans have never forgotten the prophetic role of the churches in their time of need.

Today religious and laity are dying on the frontlines of the coronavirus pandemic. They are the martyrs and saints of the future. They have taken the Maximilian Kolbe option to die so that others may live. Truly may they rest in peace.

The world awaits further daring Christian responses to the coronavirus evil because now we are “doing theology at the coalface of experience”, in the words of Bishop Kevin Dowling of Rustenburg. That makes a huge difference.

Franciscan Father Paddy Noonan has worked for decades in the archdiocese of Johannesburg and is the author of several books, including They’re Burning the Churches and Help! My Granny’s Dog Is A Racist.