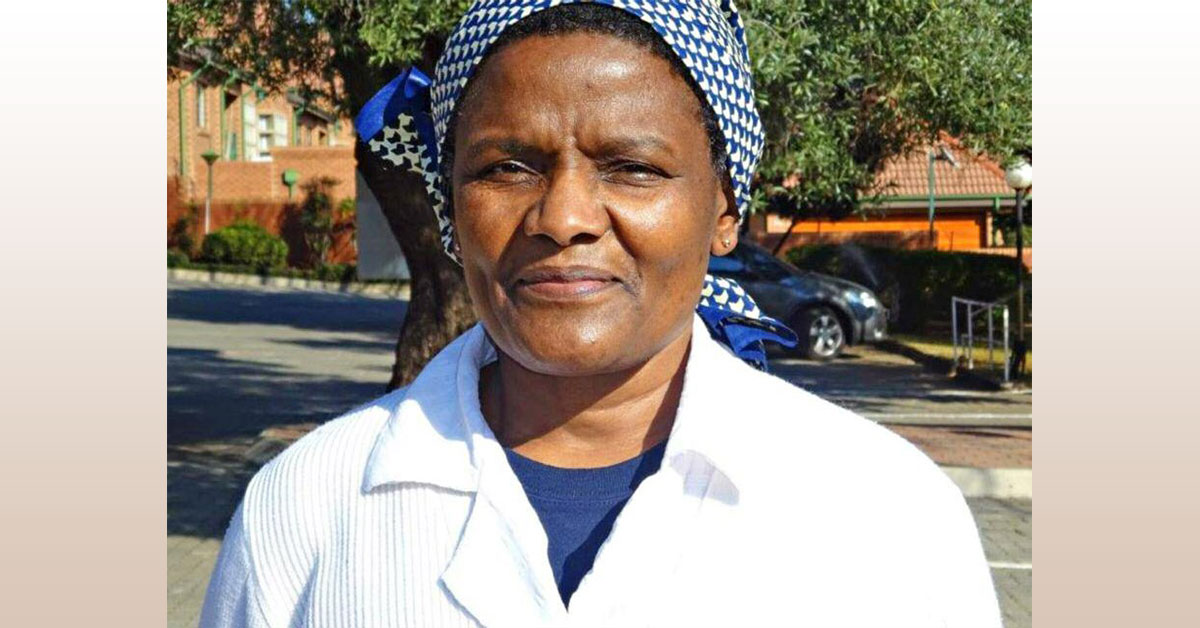 Sr Tshifhiwa Munzhedzi OP, the associate general-secretary of the Southern African Catholic Bishops’ Conference. Unusually, both top positions in the secretariat, which manages the SACBC, are filled by religious women; the secretary-general is Precious Blood Sister Hermenegild Makoro.

Before her appointment, Sr Munzhedzi served as the promoter for the cause of canonisation of Bl Benedict Daswa in Tzaneen.

She was born and grew up in Sibasa, near Thohoyandou in Limpopo. The eldest of nine children–six girls and three boys—she was named Tshifhiwa, which means gift.

“They perceived my birth as a gift from God,” Sr Munzhedzi says.

In 1984 she obtained a teacher’s diploma at the Venda College of Education in Thohoyandou, and then worked as a teacher at Gwamasenga Secondary School in Tsianda Village—while discerning where God was calling her to.

That call led her to join the King Williams Town Dominicans in 1986.

After two years as a teacher, in 1991, she went to further her studies at St Joseph’s Theological Institute in Cedara, KwaZulu-Natal, where she pursued a theology degree, finishing at the end of 1996.

She was then called to serve at Lumko Institute, an SACBC pastoral centre, as a pastoral agents’ trainer.

After four years at Lumko, she studied for her licentiate in biblical theology at the Catholic University of Eastern Africa in Kenya.

Among other responsibilities she undertook in her Dominican congregation, Sr Munzhedzi was a teacher at the Catholic Bible College of South Africa.

She has been in the leadership of her congregation for a long time, both at the local and regional level.

Sr Munzhedzi was appointed promoter of the sainthood cause of Bl Tshimangadzo Benedict Daswa in 2016.

Tell us a bit about your upbringing and youth years.

All my education was done in Catholic institutions, except for my teacher’s diploma. This meant I was exposed to religious people all the time.

When I went home for school holidays, one of my friends was a religious Sister and I would go with her on Sundays to communities where she went to lead Communion services in the absence of a priest.

I also come from a religious family. Both, my maternal grandfather and father were bishops in their churches. I was baptised into the Catholic Church when I was nine years old.

When we prayed as a family, everyone was given a chance to lead the prayer from their church’s perspective, and all were expected to participate.

At one point my parents allowed the Catholic priests to celebrate Mass at my home for the Catholic community. At the same time every member of my family, Catholic or not, was expected to join the celebration.

When I was in high school I was a member of the Christian Life Group (CLG). I enjoyed very much being a member of this group, especially the reflections and prayers we had as a group.

It was also a time of growth as we visited other CLG groups in the diocese of Polokwane.

In 1986 January, I joined the Dominican Sisters of St Catharine of Siena of King Williams Town.

Why did you choose the Dominican Sisters?

When I grew up I lived in an area served by the Holy Rosary Sisters and I went to school with the Dominican Sisters and the Sisters of Charity.

My choice of congregation to join was determined by the kindness of one of the Dominican Sisters who taught me maths, my favourite subject. I really loved who this woman was, and I wanted to be like her.

She was a quiet, gentle, prayerful and kind Sister, and really loved us children in her class.

The Sister who was the spiritual leader of the CLG group one day asked me what I wanted to do when I finished school, and I told her I would like to become a Dominican Sister.

A few weeks or months later I received a letter from my favourite Dominican Sister, telling me she had been told I was interested in joining them. She welcomed me and extended an invitation for me to come and visit them.

I thought it was God’s providence, showing me that it is what I am meant to do, that it had to be this particular Sister, who was superior of the community when the letter arrived.

I do not know if I would have personally made the contact if my CLG spiritual leader did not do that for me. God works in strange ways.

How did you become involved in the sainthood cause for Bl Benedict Daswa?

In 2016 I asked my congregational leadership if I could go and work in the diocese of Tzaneen— my home diocese—for a short time.

After receiving the leadership’s permission I wrote to Bishop João Rodrigues of Tzaneen about my desire to come and work in the diocese.

We met and talked about possible involvement in the diocese. The promoter of the cause, Sr Claudette Hiosan, was leaving the diocese, returning back to her home country, which meant there was a vacant post he needed filled. So he offered me the job.

I did explain that I had never done anything close to promoting a cause for canonisation, but I was willing to learn. With God’s help and all those who were working with Sr Claudette, I could try and I was willing to do it.

What do you regard as your greatest highlight of your time as the promoter of the Daswa cause?

I want to begin by saying there are more saints in heaven than the Church has canonically acknowledged. The few people acknowledged are put up as models for all of us.

One of the things that I learned as soon as I started doing this work was that I needed to grow in my relationship with God. As a Catholic I grew up knowing about saints and reading about them. What I did not know was the process of getting one or more declared as such by the Church.

I began to read and ask questions of all those who had been involved in the work before I came.

As I leave the work I realise there is still a lot to be done in order to promote Bl Daswa and what role saints play in our lives.

I feel that I have allowed myself to be touched by the testimonies of the many people who had been in contact with me. Their faith, trust and belief in God has really taught me humility. I still do not understand a lot, but I believe that life is in God’s hands.

I also learned through doing this work that, like Bl Tshimangadzo Benedict, one needs to allow God to influence and touch every aspect of life, no matter how small or insignificant it might seem; like when he insisted that they pray before driving. A small act, but a great act of faith and trust in God.

I hope that the many people I was in touch with were able to glimpse the love God has for each one of them.

What’s your greatest achievement in that role?

I do not see my work as one which has achievements because one can never tell what is happening in another person’s heart. Only they and God know.

What I hope I have done in the short time I was there was to get at least one person closer to God. If I have done that, then I am happy.

Otherwise, on my part I am grateful for having “met” Bl Daswa as I learned about his faith-life and who he was. I am grateful that his family taught me the gift of forgiveness and openness to God’s influence. May they be blessed.

How did you find out that your name had been included in the candidates’ list for the position of SACBC associate secretary-general?

First, I did not know there was a list of candidates. I only knew when my congregational leader invited me to come and see her, and asked me to consider the call to go and serve in the Southern African Catholic Bishops’ Conference.

How have you found the new tenure since you started in your new position at the SACBC?

Since I arrived I have been reading and listening, listening and reading. So it would be premature for me to speak about anything more than that.

What do you do for leisure, when you are not working?

I like reading all sorts of books. I have an eclectic taste—spiritual books, biographies, novels and nature books.

I also like sewing, and baking. I like the process of trying new things and seeing how they come out.

When I am really relaxed, I sometimes draw. I am no expert in any of the things mentioned, but I am happy when I am doing them, and I’m also less tense when I force myself to take time to do these things and relax.

What are your hopes for the Church and for South Africa in general?

We are living through difficult times since March 5, when we had our first Covid-19 case in South Africa. Since then life has never been the same in South Africa, and indeed the whole world.

All aspects of life have been touched, and the Church has not been spared.

It is hard not to be able to go to church, and yet this time has also

given us the opportunity to strengthen our relationship with the Lord as we pray and have services in our own homes.

Looking at statistics and hearing of the many people infected and affected by the virus, one can easily get depressed.

However, there is so much good that has come up: people helping one another in whatever way they can; the health professionals’ dedication to serving the sick, knowing they are putting their lives and the lives of their families at risk; people of faith praying together and for one another.

This indeed is a sign of hope, hope that comes from God and knowing that God is still there protecting and caring for us.

I do not fully comprehend what all this is saying to me and to all of us, but my hope and trust is in God to whom I continue to pray.

What do you pray for?

I ask that God may continue to guide all of us, to reach where we will be able to interact with one another as we used to.

“I lift my eyes to the mountains—where does my help come from? My help comes from the LORD, who made heaven and earth.

Thank you for your time and thoughts, Sr Tshifhiwa.