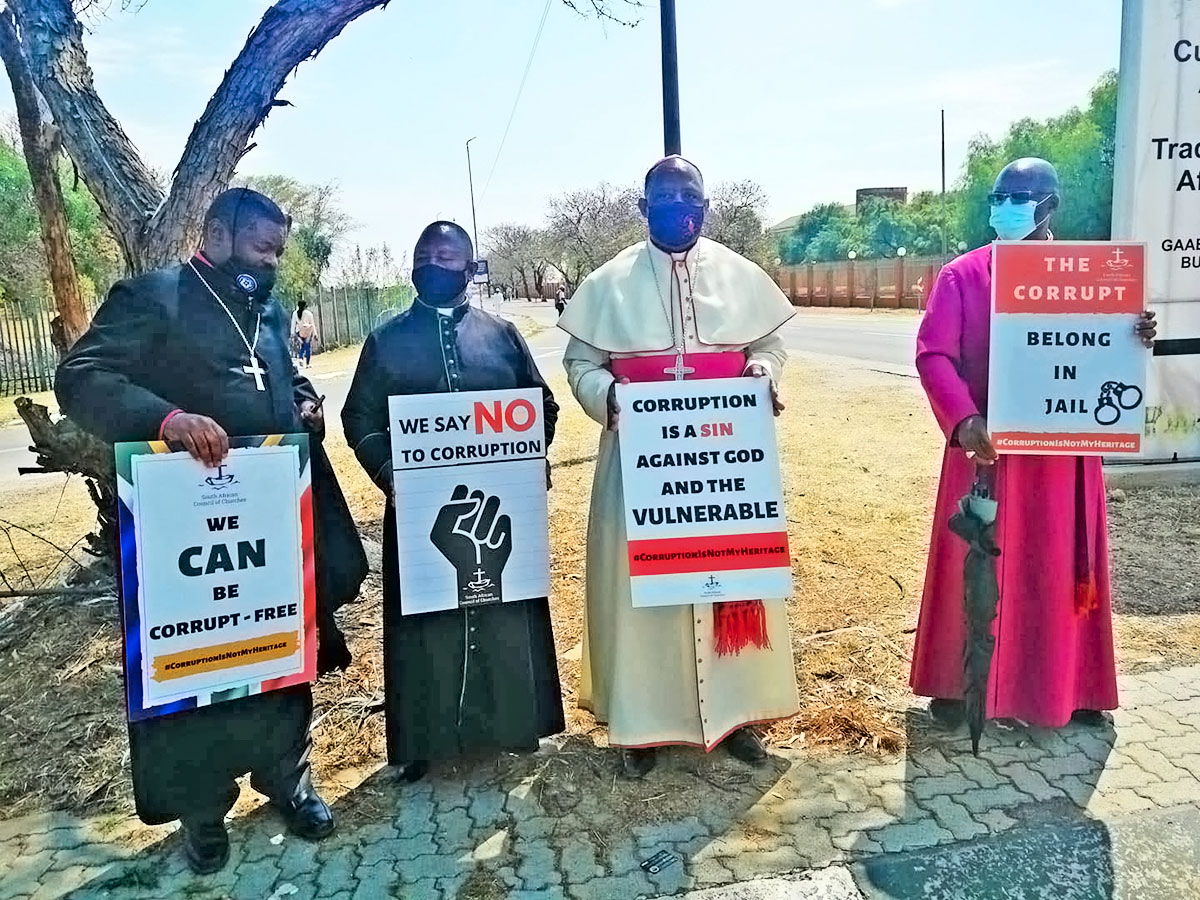 Bishop Phalana (second from right) with other Christian leaders in an anti-corruption protest in Mmabatho last week. (Photo via Facebook)

As South Africans celebrate Heritage Day, BISHOP VICTOR PHALANA of Klerksdorp recalls a history of corruption in the country that goes back to the day Jan van Riebeeck arrived on our shores in 1652. On top of that heritage, he argues, comes the socio-economic treason and terrorism committed by post-apartheid public officials.

When thinking of South Africa’s heritage, our rich diversity, vibrant history, extraordinary natural beauty and fascinating landmarks, come first to mind. On September 24 we celebrate our heritage as South Africans.

Our country has started to acknowledge the rich heritage of the Khoi, the Afrikaner, the Indian, the Coloured, the English and the Blacks. During apartheid times, our country did not reflect the cultural experiences of the majority of its citizens. European socio-cultural experiences were celebrated in song, dance, literature, museums, theatre, poetry and architect.

After 1994, we still felt like aliens in our own country. Our cultural heritage was despised and denigrated. We cried out and said: “Black lives matter!” Our heritage must be acknowledged, celebrated and promoted! Transformation is slow, but it is taking place.

The excuse of our government, for not doing enough for our heritage, is that they do not have enough money for the “Heritage Project”! The question is: “Where is the money?” The money has been swallowed by a dragon called corruption!

Steven Friedman, in an article dated September 6, 2020, reminds us that “corruption in South Africa dates back to colonisation in 1652”. Friedmann outlines a history of corruption:

“Jan van Riebeeck, the Dutch East India company employee who was sent to colonise the Cape, got the job because he was given a second chance after he was fired for ignoring the company ban on using his office to pursue personal financial interests.

“The period of Dutch rule he began lasted until 1795 and was marked by tax evasion and corruption by public officials.

“Under British rule, which followed that of the Dutch, public spending was directed to serve private interests. The most prominent colonialist of the time, Cecil John Rhodes, was forced to resign after he gave a friend an 18-year monopoly catering contract for the government-run railways (JL McCracken; The Cape Parliament 1854-1910. London, Oxford University Press, 1967, p.115).

“Paul Kruger’s Transvaal Republic, the Afrikaner-governed state against which the British fought at the turn of the century, was riddled with nepotism and economic favours for the connected. “The British administration which replaced it served the interests of mine owners on whom it bestowed special privileges. 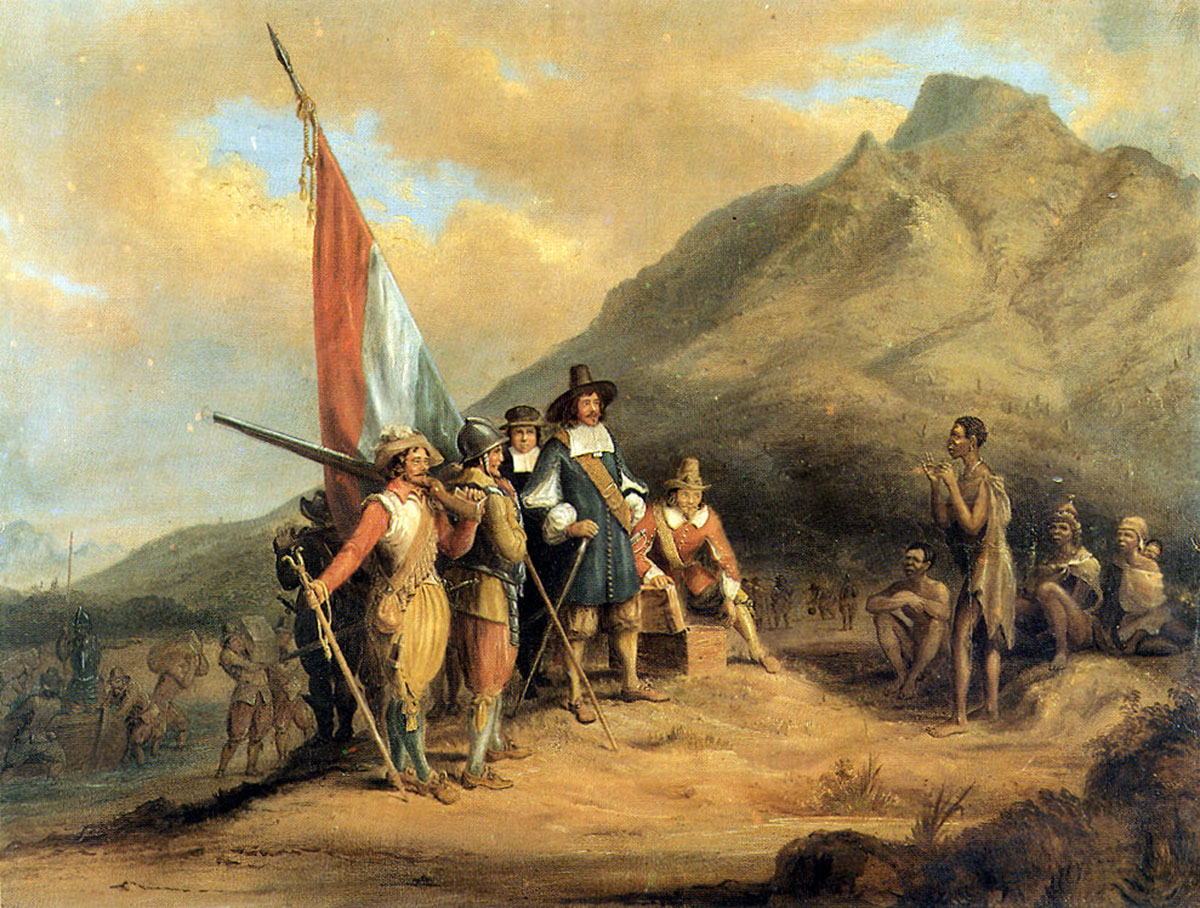 The arrival of Jan van Riebeeck is represented in a painting by Charles Bell. Van Riebeeck was the first corrupt official in South Africa.

“What today is called “state capture”, the use of the state to serve private interests, was common to Afrikaner and British rule.

“Given this history, it is not surprising that corruption was a constant feature of the apartheid period. Black people were its chief victims, since they had no rights and so no way of protecting themselves against abuse. But they were not the only ones, as politicians and officials used government power for personal gain.

“The most corrupt period in the country’s history was the last few years of apartheid, when the attempt to combat the successful international sanctions campaign made corruption, protected by government secrecy, the core government strategy. This was often done with the collusion of private businesses.”

To Friedmann’s history, I must add that we witnessed corruption in the apartheid homelands as well, where money meant for service delivery and development was used by leaders to enrich themselves and their families.

I am ashamed to acknowledge that corruption is our heritage!

Shattered hope for a “New Dawn”

When former President Jacob Zuma stepped down in 2018, there was a sense of hope that the new leadership would herald the end of an era of endless looting and pillaging. For a while, all seemed well, and our nation was making steady progress.

To our shock, the ruling party started announcing the redeployment of corrupt officials in various strategic positions, including parliament. The Covid-19 pandemic, however, seems to have revived sentiments of greed that swept our country for the past decade or so.

As our people joined hands when President Cyril Ramaphosa announced one of the world’s harshest lockdowns to deal with the Covid-19 pandemic, some of those in power saw the situation as an opportunity to enrich themselves.

As millions of people had locked themselves up in their homes, knowing they may lose their jobs and income, corrupt politicians, like hyenas circling an immobilised springbok, zoomed in on the R500-billion stimulus package to help businesses cope with the economic implications of Covid-19.

Then their target shifted to the Unemployment Insurance Fund (UIF), resulting in cash-strapped workers still not having seen one cent of what is owed to them.

Other targets followed, attracting opportunistic and well-connected private businesses with secret agendas. This resulted in illegal deals worth R2,2 billion made between corrupt officials and at least ninety companies, all firms which had miraculously and almost overnight diversified into the production of masks, face shields, and hand sanitizers.

To add insult to injury, many of these products were found to be substandard and may, therefore, have put the lives of patients, frontline workers and the whole population at risk.

To my mind, this equals premeditated murder, nothing more and nothing less.

Former Public Protector Prof. Thuli Madonsela was right when she recently described the corona-linked corruption as a threat to our democracy, our justice system, rule of law, and peace — with the outcome being death, hunger, anger and democratic fragility. In fact, I would go a step further than Prof. Madonsela and say that corruption equals treason and socio-economic terrorism, and that it should be treated as such.

Let us repent and celebrate

The National Heritage Resources Act of 1999 states that our heritage is unique and precious and cannot be renewed: “It helps us to define our cultural identity and therefore lies at the heart of our spiritual wellbeing and has the power to build our nation. It has the potential to affirm our diverse cultures, and in so doing shape our national character.” It has a healing quality too, states the Act. It celebrates our achievements and contributes to redressing past iniquities.

I will proudly wave the South African flag on Heritage Day and at the same time say to the young generation: Corruption should not be our heritage! God rebuked Israel in Isaiah 1:4: “Ah, sinful nation, a people laden with iniquity, offspring of evildoers, children who deal corruptly!” Our nation must repent on Heritage Day.

Bishop Kevin Dowling: We Can Become A Different Kind of Church