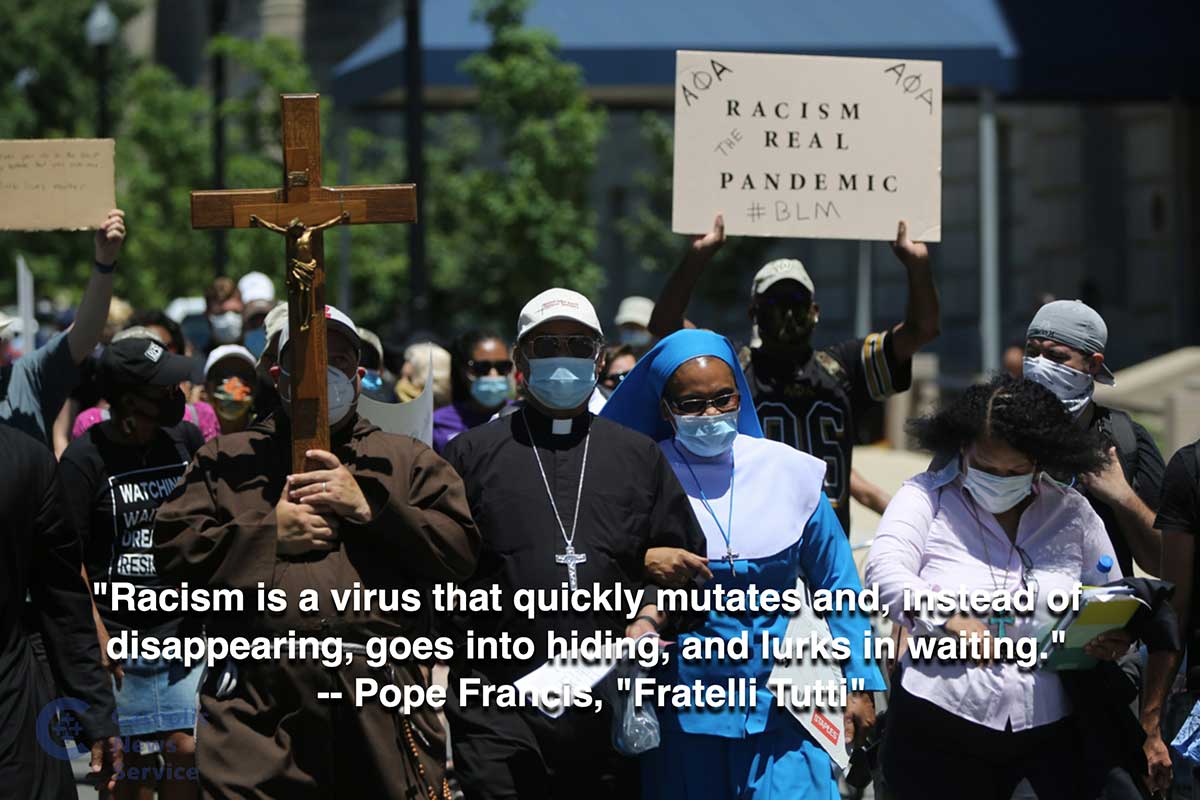 This is a quote from Pope Francis’ new encyclical, “Fratelli Tutti, on Fraternity and Social Friendship.” (CNS illustration/photo by Bob Roller)

Pope Francis’ new social encyclical offers a vision for the world of dignity for every person around the world and promotes a call to “build a new culture of fraternity and dialogue,” said the president of the Australian Catholic Bishops’ Conference.

The document, “Fratelli Tutti, on Fraternity and Social Friendship,” which the pope signed October 3, “is not just for believers but for the entire human family,” Archbishop Mark Coleridge of Brisbane said in a statement released as the encyclical became public.

Explaining that in his 2015 encyclical, “Laudato Si’, on Care for Our Common Home,” the pope spoke of caring for creation, the new teaching document “speaks of care for each other, the family that dwells together in the common home,” the archbishop said.

The archbishop’s views on the encyclical were echoed around the world as reaction to it focused on how humanity must value the lives of each human being in order to achieve peace and allow for the development of communities that are often left on the margins of society.

Bishop Georg Batzing of Limburg, Germany, president of the German bishops’ conference, described the encyclical as a “wake-up call” and an “urgent appeal for global solidarity and international cooperation,” the German Catholic news agency KNA reported.

He also said the encyclical was about the vital need to uphold human dignity. The pope, Bishop Batzing explained, was opposing national isolation and calling for an “ethical code in international relations.”

Elsewhere, Christine Allen, director of CAFOD, the international humanitarian aid agency of the Catholic Bishops’ Conference of England and Wales, said, “Pope Francis is unflinching in his message” that focuses on solidarity with poor people globally.

“Politics is failing the poor,” Allen said in a statement, “and it is shameful that some political decisions that are made affect the poorest, plunging them further into poverty, suffering and despair. Politics should be about long-term change and effective solutions, not slogans and marketing.”

Archbishop Coleridge agreed with the pope, saying that the conflicts that plague humanity “are a road to nowhere.”

“The Holy Father speaks of ideologies that seek to divide rather than unite, policies that value certain people over others and economic systems that prioritise profit over people and the planet,” he said.

The archbishop added that the pope “offers a grand yet simple vision of human interconnectedness.”

“We’re all connected to each other in ways we scarcely image. Our task now is to work out what this means in practice as we look beyond the pandemic,” he said.

In Germany, the bishops, church groups and charities gave the encyclical a predominantly positive assessment.

Bishop Batzing said the document indicates that the pope has not lost hope despite his “at times harshly formulated analysis of the world.”

The pope had referred to the new appreciation given to many people who had shown great commitment to serving others during the coronavirus pandemic and had in some cases given their lives, he said. The pope also made clear how important dialogue between nations and religions was, he added.

Cardinal Reinhard Marx of Munich said the pope had provided a clear analysis that the pandemic had exposed many false certainties. For example, he said, the pope dissociated himself from the apparently tempting ideological answers to economic and social challenges given by nationalism, populism and racism. He had also repeated his warning not to erect new borders and walls between people and nations, he said.

German church relief organisations interpreted the encyclical as providing support for people fighting against national unilateralism and an economic order geared solely toward profit and growth.

The encyclical was a concrete guideline for a global reorientation, said Adveniat, the German bishops’ Latin America relief agency. The Misereor development aid agency said the encyclical supported all those who work for the preservation of creation beyond religious and national boundaries, and who denounce human rights violations.

KNA reported that the Catholic reform group “We are the Church” called the encyclical visionary and said, “A fundamental change of course is necessary.” In politics and in religious life.

Allen at CAFOD said the pandemic early on demonstrated how people could come together to respond to a common challenge. “But Francis condemns the rush to return to politics ‘as normal,’ one of self interest and indifference to the plight of those left behind,” she said.

“This is a message not just to Catholics, or people of other faiths, it is for everyone,” Allen added. “It is a powerful voice amid the pandemic, growing inequality, conflict and racial unrest. Pope Francis’ message is clear. We cannot just switch on the reset button and go back to ‘normal'” in a post-pandemic world.