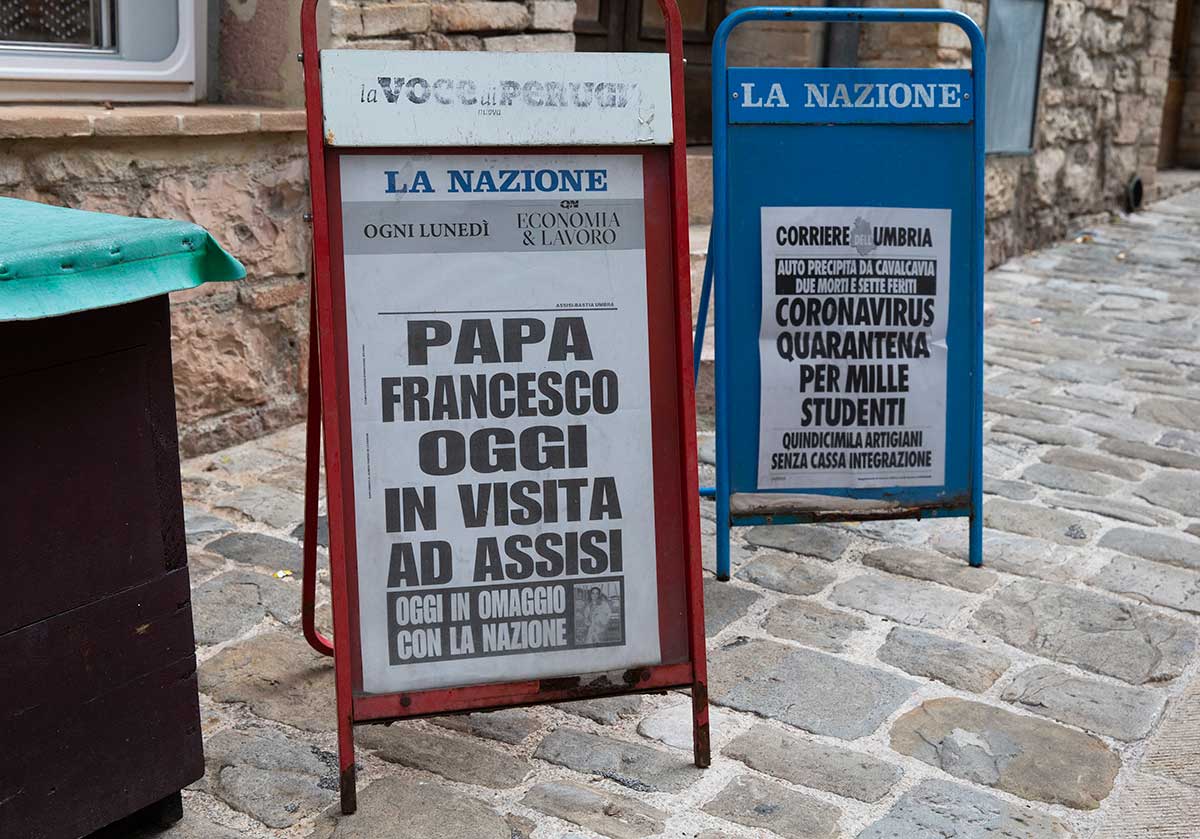 Newspaper content detailing Pope Francis’ visit to Assisi and the situation with the coronavirus in Italy is pictured in Assisi, Italy, Oct. 3, 2020. The pope celebrated Mass at the Basilica of St. Francis in Assisi and signed his new encyclical, “Fratelli Tutti, on Fraternity and Social Friendship,” in front of the tomb of St. Francis. (CNS photo/Paul Haring)

By Cindy Wooden -People who think politics is sinking to new lows may find comfort in knowing Pope Francis also is concerned about the debasement of what church teaching has described as a “lofty vocation.”

“Political life no longer has to do with healthy debates about long-term plans to improve people’s lives and to advance the common good, but only with slick marketing techniques primarily aimed at discrediting others. In this craven exchange of charges and countercharges, debate degenerates into a permanent state of disagreement and confrontation,” the pope wrote in his new encyclical.

The encyclical, “Fratelli Tutti, on Fraternity and Social Friendship,” was published October 4 and urges Christians and all people of goodwill to recognise the equal dignity of all people and to work together to build a world where people love and care for one another as brothers and sisters.

Building that world, he insisted, requires “encounter and dialogue,” processes that allow people to speak from their experience and culture, to listen to one another, learn from one another and find ways to work together for the common good.

“Today, in many countries, hyperbole, extremism and polarisation have become political tools,” the pope wrote. “Employing a strategy of ridicule, suspicion and relentless criticism, in a variety of ways, one denies the right of others to exist or to have an opinion.”

The “social aggression” often found on social media has spilled over into mainstream political discourse, he said. “Things that until a few years ago could not be said by anyone without risking the loss of universal respect can now be said with impunity, and in the crudest of terms, even by some political figures.”

Archbishop Jose Gomez of Los Angeles, president of the US Conference of Catholic Bishops, said in a statement that “in analyzing conditions in the world today, the Holy Father provides us with a powerful and urgent vision for the moral renewal of politics and political and economic institutions from the local level to the global level, calling us to build a common future that truly serves the good of the human person.”

“For the church,” he added, “the pope is challenging us to overcome the individualism in our culture and to serve our neighbours in love, seeing Jesus Christ in every person, and seeking a society of justice and mercy, compassion and mutual concern.”

In the encyclical Pope Francis had particularly harsh words for politicians who have “fomented and exploited” fear over immigration, ignoring the fact that migrants and refugees “possess the same intrinsic dignity as any person.”

“No one will ever openly deny that they are human beings,” he said, “yet in practice, by our decisions and the way we treat them, we can show that we consider them less worthy, less important, less human. For Christians, this way of thinking and acting is unacceptable, since it sets certain political preferences above deep convictions of our faith: the inalienable dignity of each human person regardless of origin, race or religion.”

Pope Francis often has insisted that he is not calling for open borders and unregulated migration and, in the document, he again insists on the right of people not to be forced to migrate.

International aid to help people overcome extreme poverty in their homelands is essential, he said, but if such development takes too long, people do have the right to migrate to ensure the good of their families.

“Certain populist political regimes, as well as certain liberal economic approaches, maintain that an influx of migrants is to be prevented at all costs,” he wrote. “One fails to realise that behind such statements, abstract and hard to support, great numbers of lives are at stake.”

For Christians, he said, the answer cannot be to simply bow out of political engagement. Instead, they must act at a local level to build relationships of trust and assistance and support politicians and political platforms that promote the common good.

“Whereas individuals can help others in need, when they join together in initiating social processes of fraternity and justice for all, they enter the ‘field of charity at its most vast, namely political charity,'” he said.

Getting practical, Pope Francis explained that “if someone helps an elderly person cross a river, that is a fine act of charity. The politician, on the other hand, builds a bridge, and that too is an act of charity” but on a larger scale.