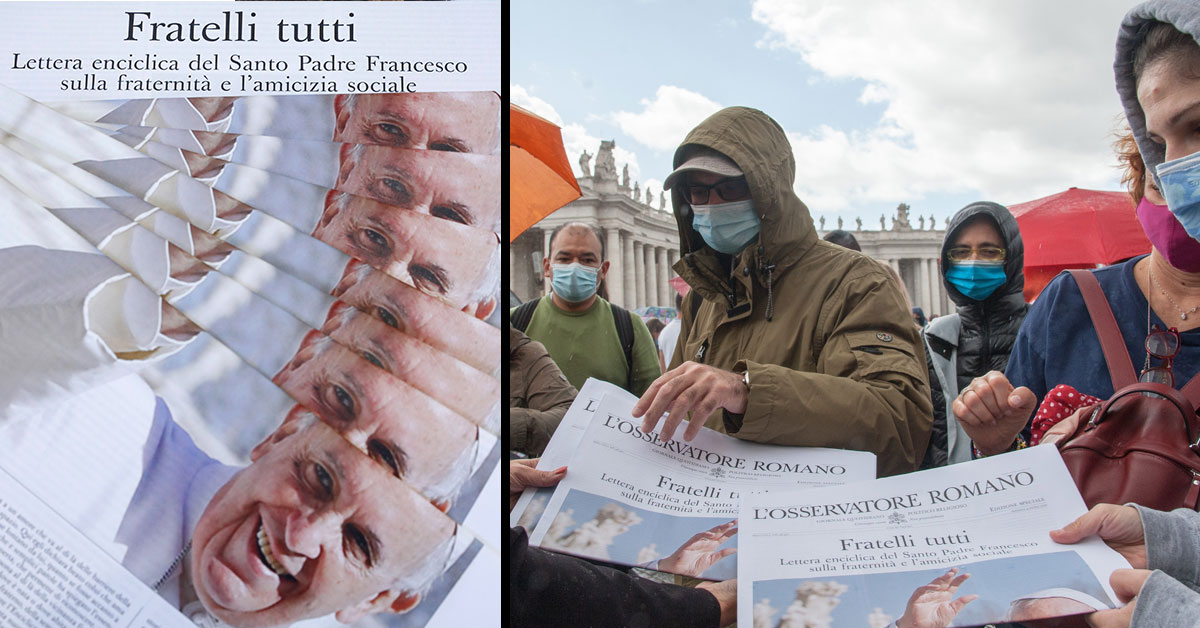 Free copies of the Vatican newspaper L’Osservatore Romano with the front page about Pope Francis’ encyclical, “Fratelli Tutti, on Fraternity and Social Friendship,” are distributed by volunteers to the faithful at the end of the Angelus in St. Peter’s Square at the Vatican Oct. 4, 2020. (CNS photo/ IPA/Sipa USA, Reuters)

In his new encyclical, “Fratelli Tutti, on Fraternity and Social Friendship,” Pope Francis reminds the faithful that “God’s plan for humanity has implications for every aspect of our lives,” said the president of the US Conference of Catholic Bishops.

These aspects range “from how we treat one another in our personal relationships, to how we organise and operate our societies and economies,” said Archbishop José Gomez of Los Angeles in a statement October 4, the day the encyclical was released by the Vatican.

He called the pope’s teaching “profound and beautiful,” and said that “like ‘Laudato Si” before it, ‘Fratelli Tutti’ is an important contribution to the church’s rich tradition of social doctrine.”

“In analysing conditions in the world today, the Holy Father provides us with a powerful and urgent vision for the moral renewal of politics and political and economic institutions from the local level to the global level, calling us to build a common future that truly serves the good of the human person,” Archbishop Gomez said.

“For the church, the pope is challenging us to overcome the individualism in our culture and to serve our neighbours in love,” he said, “seeing Jesus Christ in every person, and seeking a society of justice and mercy, compassion and mutual concern.”

The archbishop prayed Catholics and all people of goodwill “will reflect on our Holy Father’s words here and enter into a new commitment to seek the unity of the human family.”

Chicago Cardinal Blase J. Cupich said “Fratelli Tutti” is “destined to be a defining document and body of teaching for the pontificate of Pope Francis.” He called it a powerful document in which the pope “again reminds us why he is considered a preeminent moral teacher – and in an extraordinarily critical and fraught moment in human history.”

“The pope begins by identifying the challenges that result from the fragmentation and division afflicting humanity on personal, national and international levels,” the cardinal said.

“These include violence and the prospect of war and civil unrest, racism, the degradation of the environment, the ‘discarding’ of the poor and vulnerable, the crises prompted by the migration of desperate peoples, economies that benefit privileged groups,” Cardinal Cupich said, “and a stridency and coarseness that mark our public discourse and private communications and disable possibilities for real human connection.”

He noted that Pope Francis also offers “a penetrating reflection” on the parable of the good Samaritan, “which engages every one of us and the global community in a self-examination of conscience: ‘Each day we have to decide whether to be good Samaritans or indifferent bystanders.'”

The pontiff “occupies the remainder of the encyclical by reimagining a new and hopeful way of living together, one that is ultimately rooted in love and respect for the dignity of all people,” Cardinal Cupich said.

“This new and hopeful vision involves an openness to and interest in those who are different, leading to the enrichment that comes in the exchange of gifts … , a better kind of politics … , and a culture of dialogue and friendship,” the cardinal added.

“The vision he describes is in sharp contrast to a prevalent way of doing political business: revenge for past losses, the use of force, and a view of economic profit as paramount,” the cardinal said.

Washington Archbishop Wilton D. Gregory said he believes the pope’s new encyclical “has come to us at precisely the right time.”

“COVID-19 obviously has not yet ended. Many have spoken about ‘a new normal’ when the virus will have abated,” he said in a statement. “Rather I think that we should make this tragic pandemic an opportunity to think about ‘a new different’ in terms of what we value, who we value and that we are all in this together.

The pope provokes us to pursue a shared life and to seeing ‘the other’ as brother and sister, both as human beings and all as fellow creatures in ‘our common home,'” he added. “He invites us to build a ‘culture of encounter’ with pride in expressing how we are Catholics and also how we are enriched by dialogue with all people of goodwill.”