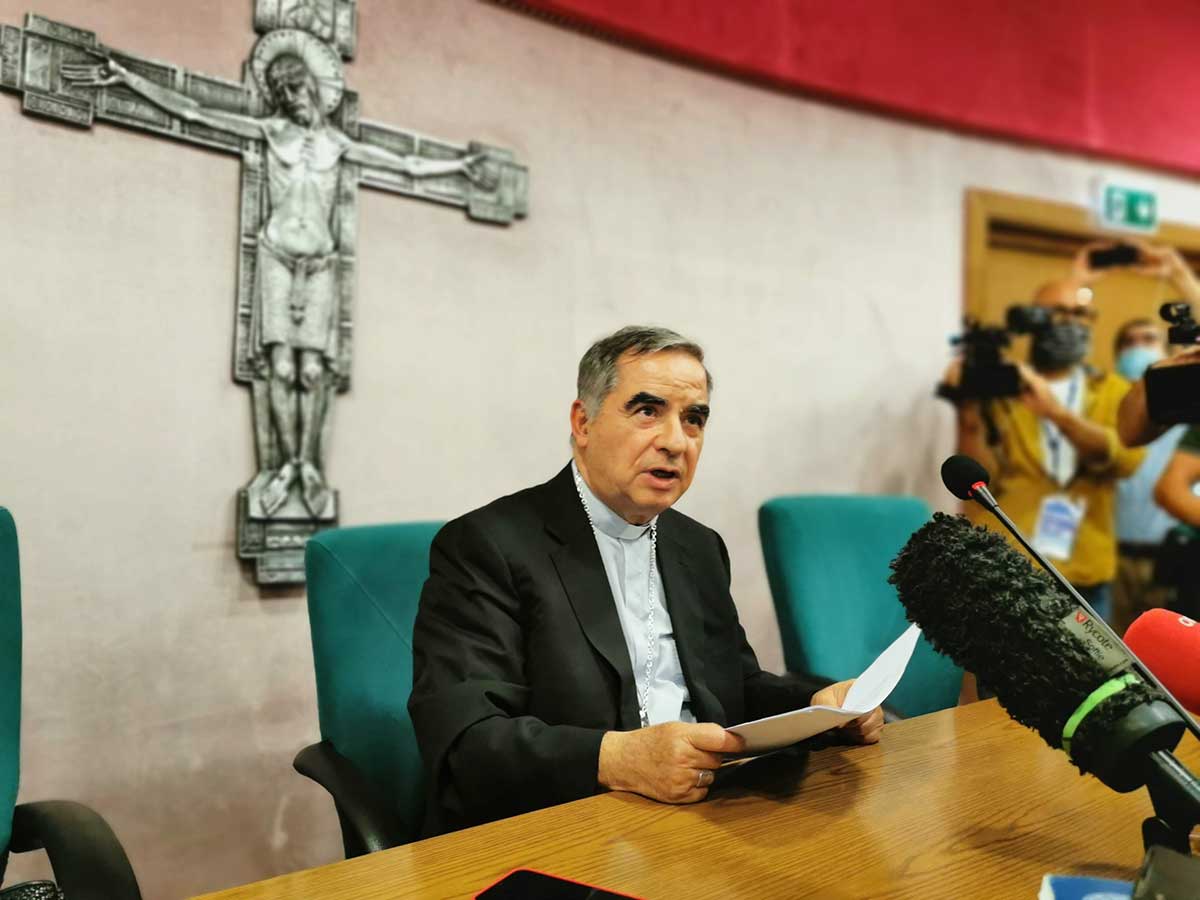 Cardinal Angelo Becciu speaks with journalists during a news conference in Rome Sept. 25, 2020. The cardinal told journalists he was asked by Pope Francis Sept. 24 to resign as prefect of the Congregation for Saints’ Causes and renounce the rights associated with being a cardinal due to an embezzlement investigation involving Vatican funds and a charitable organisation run by his brother. (CNS photo/Junno Arocho Esteves)

By CNA – When an allegation against a high-ranking churchman makes its way from Vatican-watchers to Italian newspapers to American headlines in just a matter of days, it’s a safe bet the story will have something to do with sex.

And if it’s an allegation that pertains to both sex and money, and includes the possibility of a criminal conspiracy pitting cardinal against cardinal, well, you’ve got a recipe for a best-selling potboiler, to say nothing of a story sure to circle the globe fast, and attract a lot of attention.

So it’s no surprise to see the attention paid to a set of allegations and theories that stemmed from Italian newspaper reports last week: That Cardinal Angelo Becciu sent 700,000 euros of Vatican funds to Australia during Cardinal George Pell’s sexual abuse trial, and that Becciu might have sent the money as a payment for Pell’s accusers.

But it should be noted that while the story is now the topic of discussion among Catholics everywhere, the allegations are heavy on innuendo and light, to say the least, on facts. At least so far.

The story began with highly speculative media reports suggesting that Becciu transferred funds to Australia, and suggesting that the information may have come from Becciu’s longtime aide, Mgr Alberto Perlasca, who is said to be cooperating with investigators in a multi-year investigation of numerous charges of financial misconduct and corruption surrounding the Vatican’s Secretariat of State, at which Becciu worked for years.

From there, the story picked up steam enough to include the charge that the money was transferred as a payoff from Becciu to those accusing Pell of sexually abusing them. That story has now garnered so much attention that Pope Francis reportedly met this morning with Australia’s apostolic nuncio, reportedly to ask him about any transfers of Vatican funds to the Land Down Under.

But it should be noted that there are no documents, no direct quotes, no proofs or confirmations of any aspects of the story. There are, therefore, a few possibilities:

It is possible that the Italian newspapers claiming to have spoken with first-hand sources have been misled, by someone with an agenda, or someone exaggerating rumours to gain stature or establish a narrative. This should not be considered outside the realm of possibility by anyone familiar with some outlets in the Italian press.

It is possible that Msgr. Perlasca is actually the source of the allegations, and he is not telling the truth – although, since a bank transfer from the Vatican to Australia could be easily proven, lying about one seems inadvisable, and therefore unlikely.

It is possible a transfer occurred to some Catholic entity in Australia, but for an innocuous purpose that has been mischaracterised. If that is true, it is likely easily discovered and easily demonstrated.

Or, it is possible that the substance of the allegation is true. The idea that a cardinal would act so nefariously is unsettling to many, and should not be proffered lightly. But it is among the possibilities. If it is true, it might come out in any future trial involving Becciu, or, given the nature of the Vatican, it might never come into the light at all.

CNA has uncovered a set of Vatican financial scandals with connections to Becciu for several years, and endeavoured to do so with painstaking attention to available documentary proof. Within that coverage has been reporting about conflict between Becciu and Pell. And there have long been rumours and speculation among supporters of Pell that the cardinal was set up in Australia because of his involvement in Vatican affairs.

The reports emerging this weekend have attracted interest in part because they seem to confirm that speculation and because Becciu’s role in financial scandals is now sufficiently enough established that he has been severely censured by Pope Francis. But the apparent confirmation of rumours and speculation does not by itself lend credibility to the allegations.

Catholics will be watching to see whether proofs emerge to support the spectacular charge that Becciu set Pell up for a prison term. While some commentators will be quick to regard the allegations as fact, prudent Catholics — and wise news consumers — will reserve judgment until the facts emerge.

With an investigation into Becciu getting close to its conclusion, they may not have long to wait. By Catholic news agency