Pope: Authority Is Act Of Serving Not Exploiting Others 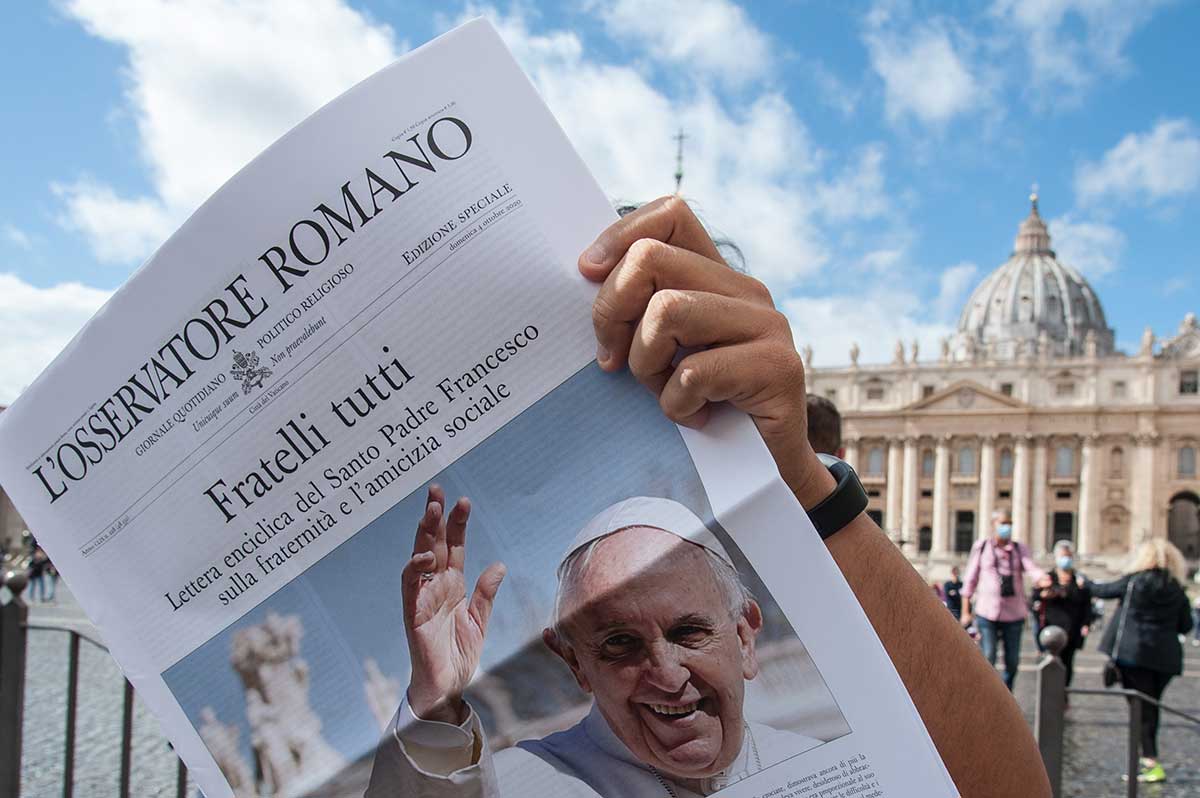 Free copies of the Vatican newspaper L’Osservatore Romano with the front page about Pope Francis’ encyclical, “Fratelli Tutti, on Fraternity and Social Friendship,” are distributed by volunteers to the faithful at the end of the Angelus in St. Peter’s Square at the Vatican Oct. 4, 2020. (CNS photo/ IPA/Sipa USA, Reuters)

By Junno Arocho Esteves – Those in positions of authority, especially in the Catholic Church, would do well to remember that their responsibility is to serve those in their care and not exploit them for their own selfish interests, Pope Francis said.

Speaking to pilgrims gathered in St. Peter’s Square during his Angelus address October 4, the pope said that throughout the ages, “those who have authority, any authority, also in the church, in God’s people, may be tempted to work in their own interests instead of those of God.”

“Authority is a service, and as such should be exercised, for the good of all and for the dissemination of the Gospel. It is awful to see when people who have authority in the church seek their own interests,” he said.

After praying the Angelus, the pope told those gathered they would receive a special edition of L’Osservatore Romano, the Vatican newspaper, that included his encyclical, “‘Fratelli Tutti,’ on Fraternity and Social Friendship.”

The pope noted that, like “Laudato Si’,” his encyclical on the environment, the new document was inspired by St. Francis of Assisi. The pope signed the encyclical October 3 at the tomb of his namesake in Assisi.

“The signs of the times clearly show that human fraternity and care of creation form the sole way toward integral development and peace, already indicated by the pope Ss John XXIII, Paul VI and John Paul II,” Pope Francis said. “May St Francis accompany the church’s path of fraternity, among believers of every religion, and among all peoples.”

In his address, the pope reflected on the Sunday Gospel reading in which Jesus recounts the parable of the murderous tenants who not only kill the landowner’s servants, but also his son when the time came to collect the harvest from the vineyard.

“Therefore, I say to you, the kingdom of God will be taken away from you and given to a people that will produce its fruit,” Jesus said.

The pope explained that the vineyard represents the people chosen by the Lord while the servants and the son represent the prophets and Jesus, respectively.

However, he added, the parable does not only apply “to those who rejected Jesus at the time” but “applies to all times, including our own.”

“Even today, God awaits the fruits of his vineyard from those he has sent to work in it. All of us,” he said. “In any age, those who have authority, any authority, also in the church, in God’s people, may be tempted to work in their own interests instead of those of God.”

Recalling the day’s second reading from St. Paul’s letter to the Philippians, the pope called on Christians to become “good workers in the Lord’s vineyard” and to commit daily to becoming “that which is true, noble, just, pure, loved and honoured.”

“It is the attitude of authority and also of each one of us, because every one of us, even in a small, tiny way, has a certain authority,” Pope Francis said.

“In this way, we shall become a church ever richer in the fruits of holiness, we shall give glory to the Father who loves us with infinite tenderness, to the Son who continues to give us salvation, and to the Spirit who opens our hearts and impels us toward the fullness of goodness.”