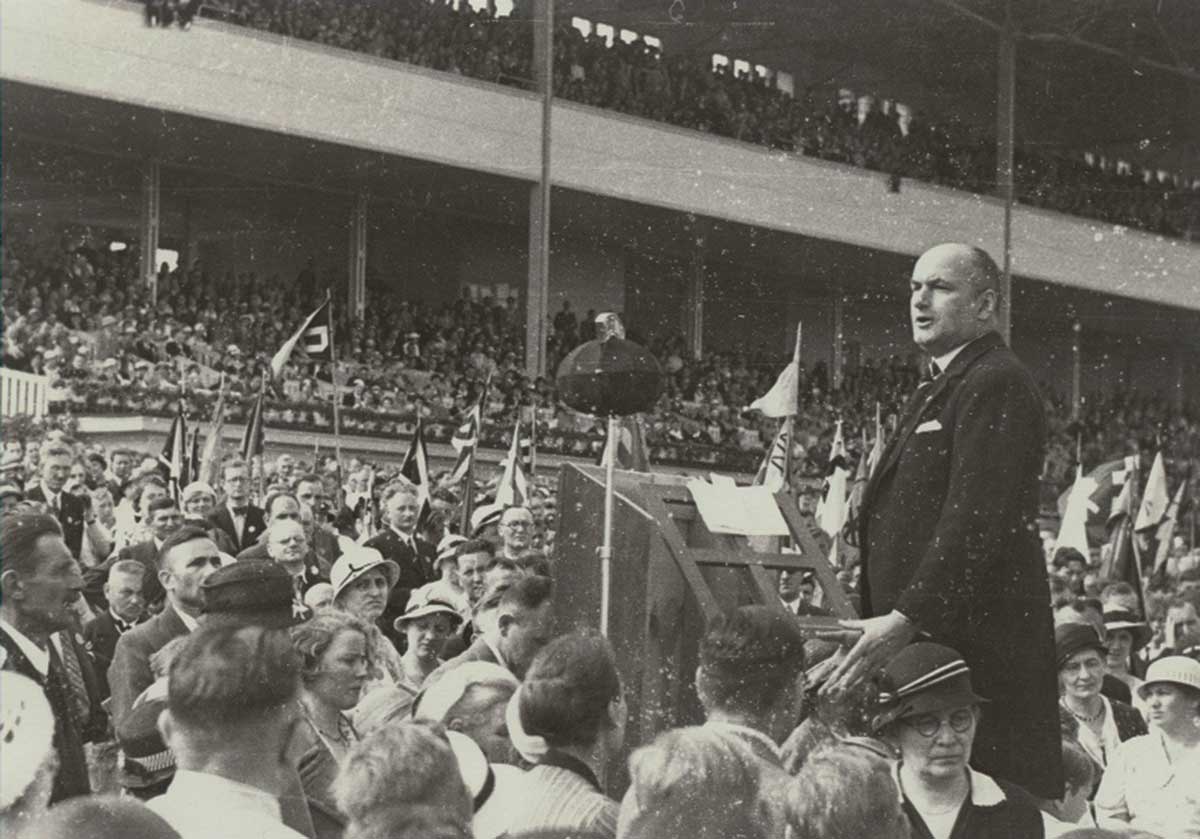 Catholic leader Erich Klausener is pictured in a 1934 photo. An official in the German government, Klausener was killed in 1934 by Nazi SS officers days after defending the former Weimar Republic against Hitler’s National Socialist movement. (CNS photo/courtesy Archive of the German Youth Movement)

An official in the German government, Klausener was killed in 1934 by Nazi SS officers days after defending the former Weimar Republic against Adolf Hitler’s National Socialist movement.

Long after Klausener’s death June 30, 1934, Catholics gathered twice annually at his grave in the cemetery at his parish to pray the Stations of the Cross and recall the life of one of their own who dared to question the Nazi regime.

In 2009, Klausener’s nephew, Tilman Punder, said at a memorial in the Berlin Archdiocese that his uncle was the first Catholic victim of Hitler’s repressive government.

“As a representative of a solid democracy, Klausener had defended the Weimar state against the Hitler movement. On June 30, old scores were to be settled and at the same time the activities of this dangerous Catholic leader were to be brought to an end. Calling the masses together was to remain the monopoly of the National Socialists,” Punder said.

Klausener was the highest-ranking lay Catholic in the German capital. In 1929, he became the first head of Catholic Action, a lay organization founded by Pope Pius XI to encourage Catholic participation in German society.

His death in his Ministry of Transport office came less than a week after delivering a speech to 60,000 enthusiastic Catholics.

A popular political leader, Klausener addressed the gathering known as Kirchentag for the third consecutive year in 1934. He ended his speech at the Hoppegarten racetrack near Berlin by opposing the exclusion of ideological opponents to the National Socialists from public life and the government’s ban on Catholic worker associations.

A lawyer, Klausener was a top civil servant for years, responsible for the police. By all accounts a conservative Catholic, Klausener in 1931 tried to get Hitler declared an undesirable person so he could be deported to Austria. When Hitler rose to power in 1932, Klausener was moved to an insignificant job in the Ministry of Transport in retribution.

Klausener also was a board member of the St. Matthew Parish in Berlin. As the summer school holidays were about to start in 1934, his parish priest, Father Albert Coppenrath, asked him to procure an unused railroad wagon to serve as a shelter for a newly acquired Catholic youth recreation center in a forest south of the city.

In a written statement later, Father Coppenrath, who died in 1960, recalled, “On Saturday, June 30, around noon, Klausener informed me by telephone that the railway car would be on site on July 3. I was delighted and thanked him for his efforts.”

Ninety minutes later, the priest wrote, he learned Klausener was dead. He said that a transport ministry official called “and asked me to inform Mrs. Klausener that her husband had just died in an accident.”

The official said suicide was the cause of death.

“I protested vigorously against ‘suicide’ and, since I had the sudden realisation that this was a political matter, I added, angrily: ‘Nobody who knew Klausener will believe this deception!'” Father Coppenrath’s statement said.

The priest accompanied Klausener’s wife to the ministry. They encountered two SS guards in front of Klausener’s office, who refused her request to see her husband’s body.

That Saturday is known as the Night of the Long Knives, which saw Hitler rid the Nazi ranks of opposition, including those holding wide popularity and known to publicly challenge the Nazis.

A few days after his death, Klausener was buried during a secret ceremony. Today, a prominent plaque marks his grave.

After starting a collection for a tombstone, Father Coppenrath was questioned three times by the secret police. The Nazis confiscated the funds already collected. In 1938, the priest was charged with a “crime,” but the case later was dismissed.

The charges did not stop Father Coppenrath from keeping Klausener’s memory alive twice a year: on the anniversary of his death and at the yearly All Souls procession the Sunday after Nov. 2 in the parish cemetery, where large numbers of Catholics prayed the Stations of the Cross.

Eventually, in 1943, the priest was banished from Berlin. He only returned after the war.

The circumstances surrounding Klausener’s death became known during the Nuremberg Trials, which revealed that Hermann Goering, one of the most powerful Nazi leaders, ordered that he be killed.

Klausener’s last act of kindness, the railway car, for 85 years provided shelter for children before it was moved in 2019 to the German Technical Museum in Berlin, where it will go on display in 2021.

Streets, squares and schools are named for Klausener throughout Germany. In 2014, a commemorative plaque was erected in front of St. Matthew Church. A another was installed in front of his Berlin flat. His bust is displayed on the square in Hoppegarten, where he delivered his last speech.

In 1999, the German Catholic Church accepted Klausener as a witness of faith into the German martyrology of the 20th century.

The Holy See and the Third Reich signed the Reichskonkordat, a treaty that attempted to guarantee the rights of Catholics in Germany July 20, 1933. However, historians agree that the Kirchentag gatherings were seen as a threat by the Nazis, who wanted the churches to return to a state of “churchification” under which worshippers would not be involved in society.

In recent decades, several Catholic theologians and laypeople have called for beatification for Klausener, citing his defence of Catholics participation in public life as the reason for his death.

However, sociologist Ekkerhard Klausa, who works with the German Resistance Memorial Centre in Berlin, concluded that while Klausener died because of his commitment to Christianity, he should not be considered a martyr. Klausa has explained that Klausener resolutely championed the interests of the Catholic Church, but that he had not actively fought the regime.