Pope Francis: The Poor Are At The Heart Of The Gospel 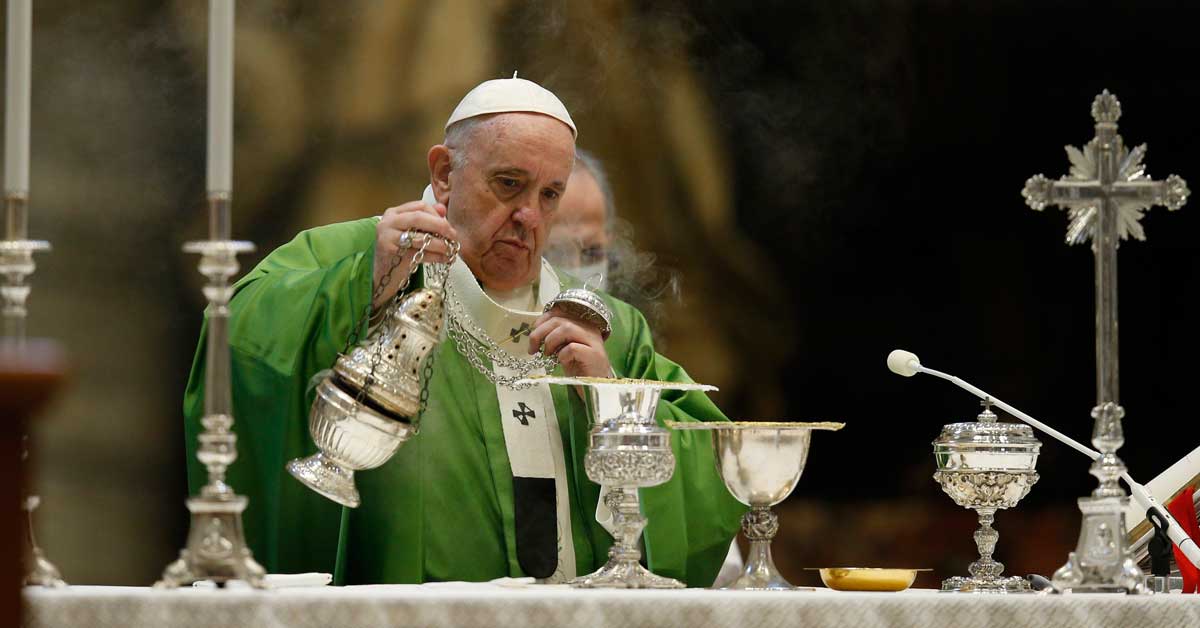 Pope Francis said that the needy are at the heart of the Gospel as he celebrated a Mass marking the World Day of the Poor.

In his homily in St Peter’s Basilica November 15, the pope urged Catholics to take risks to help the millions of people worldwide who live below the poverty line.

“Do not forget: the poor are at the centre of the Gospel; the Gospel cannot be understood without the poor,” he said, adding: “The poor guarantee us an eternal income and even now they help us become rich in love. For the worst kind of poverty needing to be combated is our poverty of love.”

Pope Francis celebrated the Mass at the Altar of the Chair in St Peter’s Basilica on the fourth annual observance of the World Day of the Poor, which falls on the 33rd Sunday in Ordinary Time.

The Parable of the Talents

In his homily, the pope reflected on this Sunday’s Gospel reading, Matthew 25:14-30, known as the Parable of the Talents, in which a master entrusts talents to his servants. The pope explained that one talent was equivalent to the income from 20 years’ work.

The pope said that at the centre of the parable was the question of service.

“In the Gospel,” he noted, “good servants are those who take risks. They are not fearful and overcautious, they do not cling to what they possess, but put it to good use. For if goodness is not invested, it is lost, and the grandeur of our lives is not measured by how much we save but by the fruit we bear.”

He continued: “It is sad when Christians play a defensive game, content only to observe rules and obey commandments.”

The pope said that this risk-averse attitude was summed up in the figure of the lazy servant, who failed to invest his talent.

“The master actually calls him ‘wicked.’ And yet he did nothing wrong! But he did nothing good either. He preferred to sin by omission rather than to risk making a mistake,” he said.

The pope added: “The Lord asks us instead to be generous, to conquer fear with the courage of love, to overcome the passivity that becomes complicity. Today, in these times of uncertainty and instability, let us not waste our lives thinking only of ourselves, or deluding ourselves into thinking: ‘peace and security!’ (1 Thessalonians 5:3).”

Pope Francis said that at the end of our lives, success, power and money will be revealed as illusions, while love will be shown to be true riches.

Thanking Those Who Make a Difference

At the end of his homily, the pope paid tribute to Fr. Roberto Malgesini, who was stabbed to death in Como, Italy, September 15. The 51-year-old priest was known for his devotion to the homeless and migrants.

“I would like to thank all those faithful servants of God who quietly live in this way. I think, for example, of Fr. Roberto Malgesini. This priest was not interested in theories; he simply saw Jesus in the poor and found meaning in life in serving them. He dried their tears with his gentleness, in the name of God who consoles,” he said.

“The beginning of his day was prayer, to receive God’s gifts; the centre of his day was charity, to make the love he had received bear fruit; the end was his clear witness to the Gospel. This man realised that he had to stretch out his hand to all those poor people he met daily, for he saw Jesus in each of them.”

“Let us ask for the grace to be Christians not in word, but in deed. To bear fruit, as Jesus desires. So be it.”

In June, the World Bank estimated that the pandemic will push 100 million people into extreme poverty this year, increasing global poverty rates for the first time in decades. More than 200 million people are believed to have lost their jobs as a result of the pandemic.

In his message for the 2020 World Day of the Poor, the pope said: “This pandemic arrived suddenly and caught us unprepared, sparking a powerful sense of bewilderment and helplessness. This has made us all the more aware of the presence of the poor in our midst and their need for help.”

World Day of the Poor

Pope Francis established the World Day of the Poor in the apostolic letter “Misericordia et misera,” published November 20, 2016, at the end of the Extraordinary Jubilee of Mercy.

He decreed that it should be celebrated on the 33rd Sunday of Ordinary Time, in preparation for the Solemnity of our Lord Jesus Christ, King of the Universe, “who identified with the little ones and the poor and who will judge us on our works of mercy.”

“It would be a day to help communities and each of the baptised to reflect on how poverty is at the very heart of the Gospel and that, as long as Lazarus lies at the door of our homes, there can be no justice or social peace,” he wrote.

“This Day will also represent a genuine form of new evangelisation which can renew the face of the Church as She perseveres in her perennial activity of pastoral conversion and witness to mercy.”

Pope: Contempt for Life is the Source of all Evil