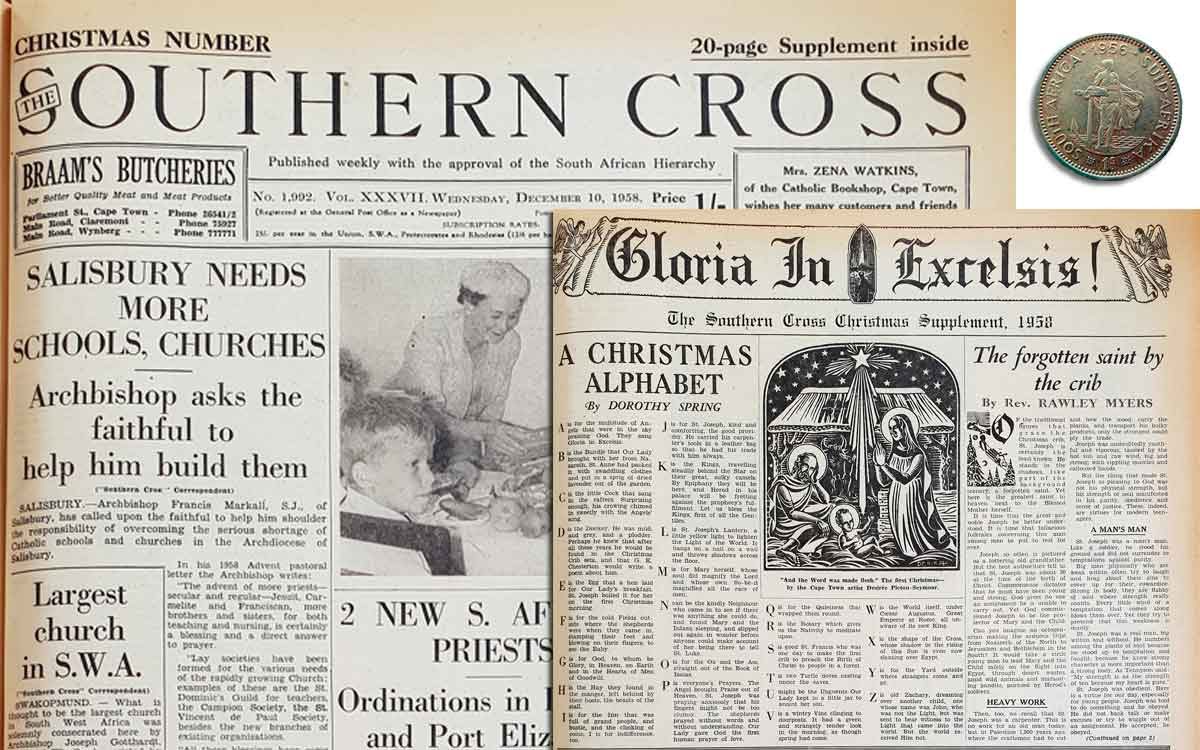 The Christmas edition of The Southern Cross in 1958 was a bumper 32-page affair. GÜNTHER SIMMERMACHER steps into a time-capsule from 60 years ago.

In the 1950s, the Catholic Church in South Africa, as elsewhere, was confident, which finds expression in the Christmas issue of 1958, dated December 10.

Coming in at 32 pages — including a 20-page Christmas supplement and two  full-page ads — the cover price was a shilling (pictured above), which would have the purchasing power of around R35 today.

There are many more photos than there were in previous decades. One shows the Durban Players Guild’s production of The Mime of Bernadette by Hugh Ross Williamson.

The lead story concerns the shortage of Catholic churches and schools in Salisbury, today’s Harare. With so many missionaries arriving, said Archbishop Francis Markall, the faithful must pitch in to build these much-needed structures.

The Radio Critic in the “This Week on Air” column notes that he (if, indeed, it was a he) is losing interest in radio. “the sequence of programmes day by day has settled into such drab sameness,” he writes. The only unmissable programme is Dewar Macormack’s “Friday Night at 8:15”.

Invariably, lots of English writers filled the pages of The Southern Cross back in ‘58. Douglas Hyde wrote his long anti-communist articles, Sir Leslie Shane recounted his reception into the Church in 1908.

This week’s “Catholics Among the Stars” column looked at British actress Noelle Middleton.

Editor Fr Louis Stubbs writes two editorials: one on Christmas, and the other on how non-Catholics see the Church as an organisation. Rather, he writes, the Catholic Church is an organism which grows from the “living vine” — Jesus Christ. 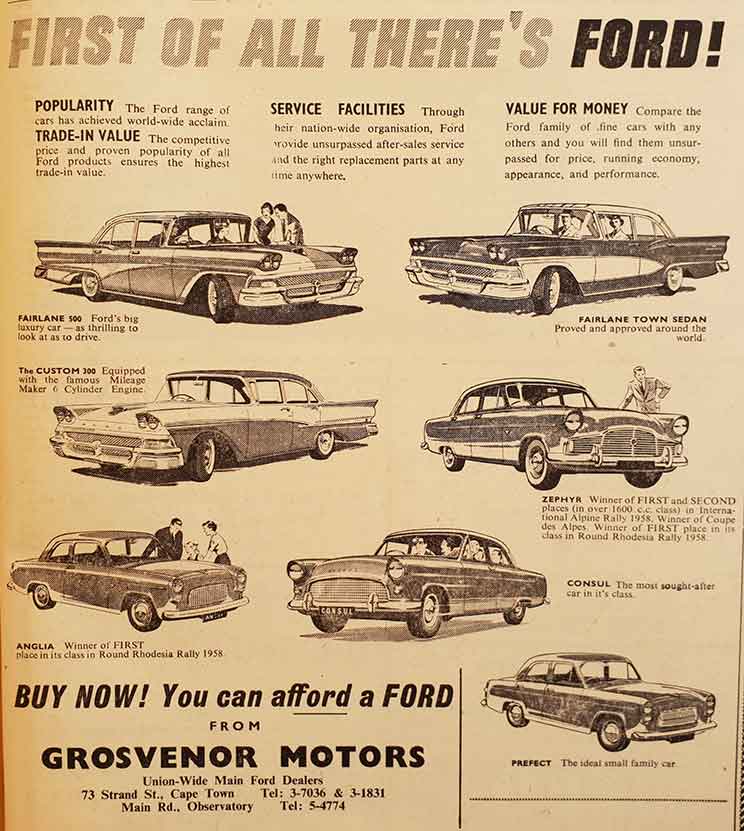 How big do you want your car? Advert in the 1958 Christmas issue.

Dorothy Sprigg offers an ABC of Christmas. The letter E stands for “the egg that the hen laid for Our Lady’s breakfast. St Joseph boiled it for her on the first Christmas morning”. Obviously.

Bishop Fulton Sheen calls for a Christmas gift to the Christchild: to resolve spending an hour a day in his presence.

Aunty Valerie Fisher offers two Christmas articles to the fans of her “Children’s Corner”, and Fr Gerald McVann OP reflects on the Third Joyful Mystery: The birth of Our Lord.

Finally, Laurence McCauley takes pity on the poor poultry destined for the Christmas table, but notes: “That Christmas dinner, however hard it might be on the worried birds who play so central a role in the festivities, is almost as much part of Christmas as the Mass.”

In 1958, Catholic businesses supported the Catholic press. From Durban there were, among many others, Durity Frocks, Hatcher’s auto salvage experts, Irene Lord’s furriers, North’s lawnmowers, and the Creamery and Browdun’s tearooms.

And then there is an ad placed by all the contractors involved in building St Finbar’s church in Fairview at Walmer, Port Elizabeth — the diocese’s first church in 1958.