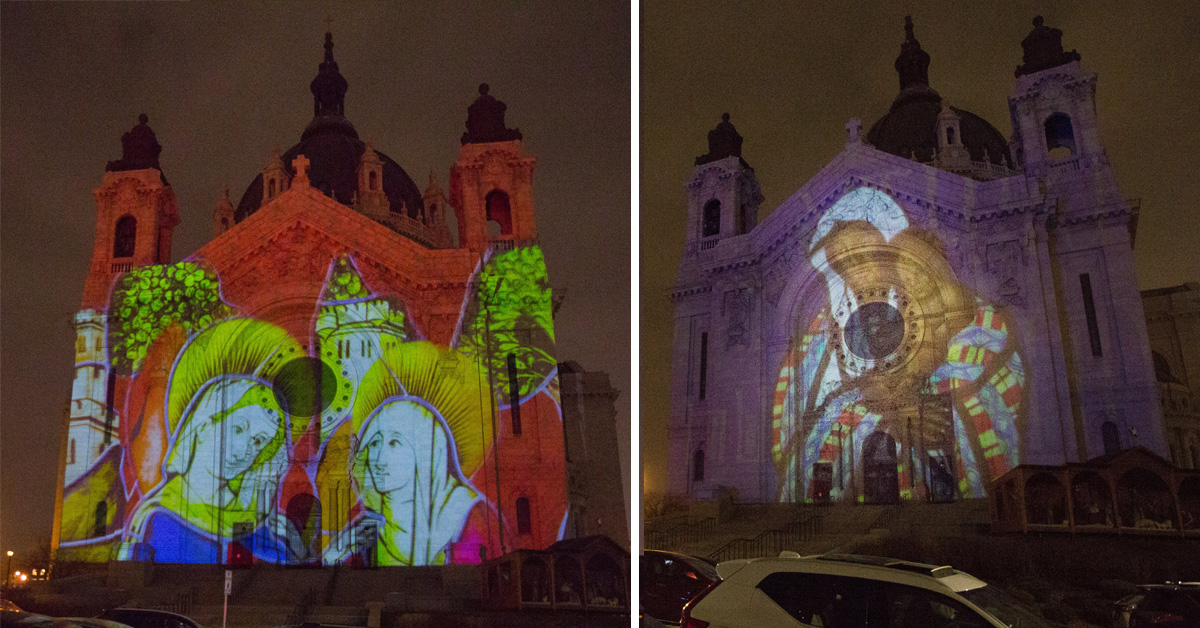 An image of Mary with Jesus is reflected on the Cathedral of St. Paul in St. Paul, Minn., Dec. 17, 2020. The presentation was part of a Luxmuralis light and sound show that was set to run through Dec. 19. (CNS photo/Dave Hrbacek, The Catholic Spirit)

Elisabeth Holod of Assumption Parish in St. Paul has long been intrigued by light-sound shows and art history, and she loves the Cathedral of St. Paul, which is near her home, as a place of faith and beauty.

Those interests converged in a unique way this year, as she helped a British light and sound company, Luxmuralis, made its U.S. debut at the cathedral, with a Nativity story called “Cathedral Illuminated: The Manger.”

Open to the public and viewed from cars along John Ireland Boulevard in front of the cathedral because of COVID-19 safety protocols, the show ran in continuous 12-minute loops from 6 p.m. to 9 p.m. each day Dec. 17-19.

Large-scale images were projected on the cathedral’s east-facing facade and an original, accompanying score was broadcast to spectators on a “hyper-local” radio frequency provided at the site.

The Cathedral Heritage Foundation presented the display, which was made possible by numerous community sponsors; it also was livestreamed on the foundation’s Facebook page. The gentle and hopeful show came as the nation grapples with COVID-19, stark political divisions and racial tensions brought by the death of George Floyd, Holod said.

“In this most challenging of years, what a beautiful way to close the year, this gentle giant (the cathedral) opening its arms to hope, wonderment and joy,” Holod told The Catholic Spirit, newspaper of the Archdiocese of St. Paul and Minneapolis. The show also has the most important story to tell, she said: “In the birth of a child, the hope of the world.”

Holod said she was introduced to Luxmuralis and its lead artist and artistic director, Peter Walker, two years ago on a trip to see her son at Oxford University in Oxford, England. Luxmuralis’ art projections have appeared in Britain and elsewhere in Europe.

The shows are deeper and hold more emotional impact than a “flash to the beat” techno-music dance rhythm, said Holod, who studied art and architecture as part of studying French at St. Mary’s College in Notre Dame, Indiana, spending a year in France and travelling Europe.

Advent: Seeking the Face of God? Look Around You

Vatican to Young People: Ask for ‘Words of Wisdom’ for Christmas

During Pandemic, Expert Urges Ban on Singing in Church at Christmas