The History of ‘Silent Night’ 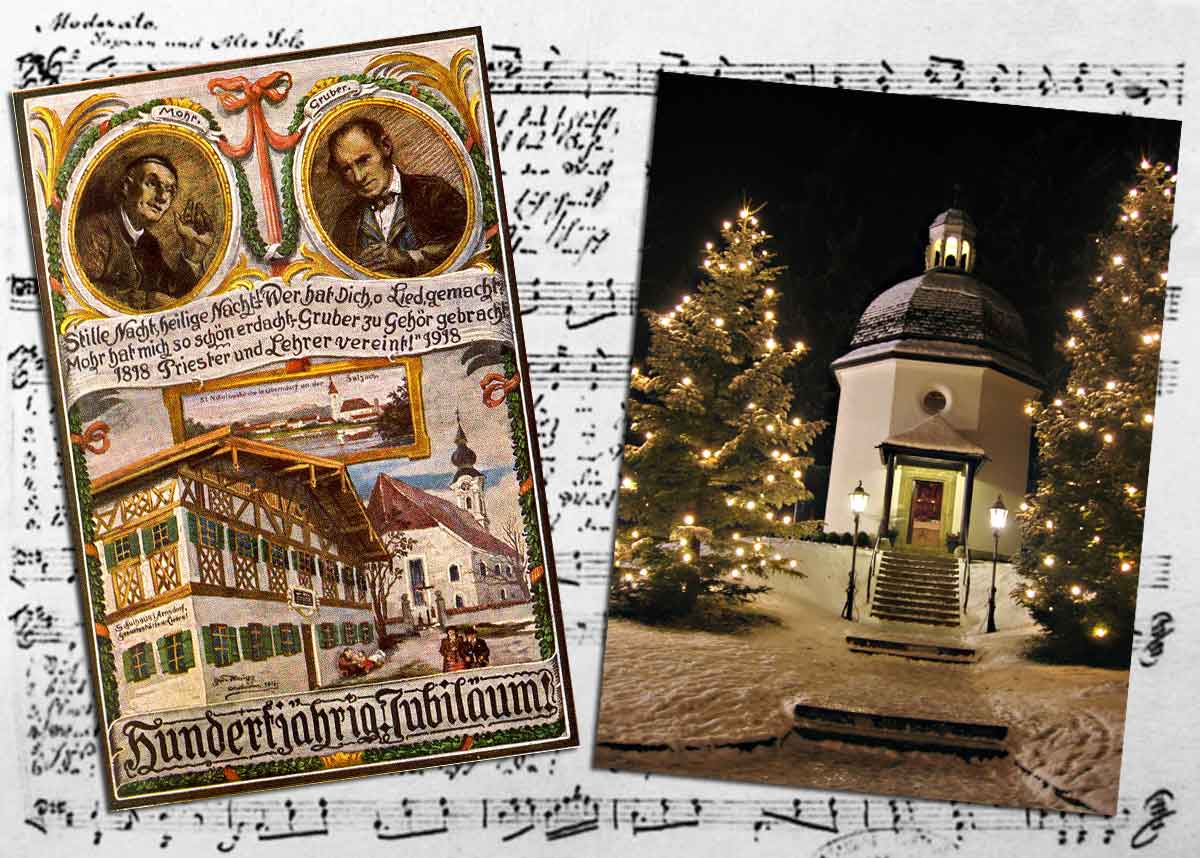 (Left) A card issued in 1918 to mark the centenary of “Silent Night” being written, with the images of composers Fr Joseph Mohr (left) and Franz Gruber.(Right) The Silent Night chapel in Oberndorf, near Salzburg, Austria. (Photo: Gakuro/Creative Commons) (Background) Franz Gruber’s notation of “Stille Nacht, Heilige Nacht”, with his own autograph, from around 1860.

Translated into 140 languages, it may be the most famous Christmas hymn in the world. Günther Simmermacher looks at the history of ‘Silent Night’.

What “Yesterday” is to the Beatles, “Silent Night, Holy Night” is to Christmas music. The story behind perhaps the most famous carol is also one of the most Christmassy, having even been the subject of several films.

Of course, movies are dramas, not documentaries, and therefore need some kind of dramatic crisis that requires a solution. In the Silent Night movies, that predicament usually hinges on a broken church organ, put out of action by the gnawing teeth of a church mouse. The boring truth is that the organ probably was not the catalyst.

But our story begins with the parish priest who wrote the words.

Who Wrote the Words?

At the time “Silent Night” was completed in 1818, Fr Joseph Mohr was the assistant priest of the Austrian village of Oberndorf, near Salzburg. But two years before, he had been the parish priest in another village in the region, Mariapfarr.

It was there, while trudging through the snowmaking parish visits, that he wrote a poem, a year after his ordination, which he titled “Stille Nacht, Heilige Nacht” (which, as you have already guessed, means “Silent Night, Holy Night).

That ordination in 1815 might not have happened at all. Mohr was born in Salzburg in 1792 — out of wedlock. His father was a military man who fathered several children with different women. Mohr grew up without him; talk is that the godfather at Joseph’s baptism was Salzburg’s executioner. Because he was born out of wedlock, his ordination had to be approved by Pope Pius VI.

And Mohr might well have become a musician instead of taking holy orders. As a child he exhibited musical talent — and the cultured people of Salzburg, the birthplace of Wolfgang Amadeus Mozart, knew to appreciate that. The vicar of the cathedral, Johann Nepomuk Hiernle, paid for his schooling.

Mohr’s education also included a course in theology, and that led him to the priesthood.

Fr Mohr first worked in Berchtesgaden in Bavaria, but soon returned to the Salzburg area, going first to Mariapfarr, where he wrote his poem.

Too happy to be a priest

In 1817 he was transferred to Salzburg. There his superior priest was decidedly unimpressed with the cheerful and popular young priest.

Fr Mohr, said the older priest in an official complaint, was not only insubordinate but also lazy in his studies, and reluctant to visit the sick and schools. On top of that, Fr Mohr lacked the solemnity proper to a 19th-century Austrian priest, was inclined to make jokes — even with members of the opposite sex — and liked to sing apparently unedifying songs.

An investigation was launched in October 1818 and — happily for our carol services today — determined that Fr Mohr was quite a suitable priest, even if he did smile a lot.

Now supplying in Oberndorf and preparing for Christmas, Fr Mohr remembered that poem he had written at Mariapfarr, and decided that it should be set to music for Christmas Eve Mass.

His reasons for that are not recorded. It might well be that he simply regarded his poem as rather good and suitable for sharing—and clearly many generations of people around the world have agreed with that sentiment.

As a trained musician, he had an idea that his poem would be best arranged for guitar accompaniment. Again, it is not known why he thought that.

One speculation is that the church’s small, moveable pipe organ was defective (enter the church mouse), but there is nothing to validate that idea.

Whatever the case, Fr Mohr asked the parish’s organist, the schoolmaster Franz Gruber, to come up with a tune.

Like Fr Mohr, Gruber was born into difficult economic circumstances — his father was a weaver — and received an education due a mentor who recognised his musical talent.

Instead of becoming a weaver, as fate seemed to have destined, Gruber was educated with a specific vocation in mind: to be a music teacher.

That career brought him to the village of Arnsdorf, a place of pilgrimage, where he taught at what is now Austria’s oldest-running school. But he had his sights on a position in neighbouring Oberndorf, which is how Gruber became the organist and choirmaster of the parish there, and how we got to know Fr Mohr.

The story goes that Fr Mohr gave Gruber the task to score his poem on the morning of Christmas Eve, and so the organist wrote that memorable, inspiring tune in just a few hours, just in time before the hymn’s premiere.

This account ties in with the broken-organ theory, though one might think that writing a guitar arrangement for an existing hymn would have been the easier option in overcoming the problem of a defective musical instrument at such short notice.

The records simply do not tell how much time Gruber had been given to write that tune. So we might as well take it that it was on the morning of December 24.

At the Christmas Eve Mass in 1818 in Oberndorf’s church of St Nicholas (dedicated to the saint who soon would become the global template for Santa Claus), Fr Joseph Mohr and Franz Gruber performed “Stille Nacht, Heilige Nacht” for the first time in public. Fr Mohr played the guitar and both composers sang, with the choir repeating the last two lines of each verse in four-part harmony.

The people of Oberndorf were moved and enthused by what they had heard — and soon forgot about the seasonal hymn. It was an organ builder named Karl Mauracher who was, well, instrumental in taking the carol to a wider audience.

He had been in Oberndorf to either fix the organ (so perhaps a mouse ate from it after all!) or look at installing a new, bigger one under the supervision of Gruber. While there, Mauracher heard about that beautiful hymn which the priest and organist had written.

The following Christmas, in 1819, it was sung at Mauracher’s home church in Fügen, Tyrol, about 100km from Oberndorf.

In 1822, Austria’s Emperor Franz I and Russian Tsar Alexander I visited Fügen, where parishioners of the small town performed it for the two monarchs and their respective entourages.

From there it was taken up by a folk group called The Strasser Sisters — a precursor to the singing Von Trapp Family —  who performed folk songs from Tyrol throughout the German-speaking region. One of these songs was the non-Tyrolean Christmas hymn of Fr Mohr and Gruber.

When the organist of a Catholic chapel in Leipzig, Germany, heard it, he asked the sisters to sing it there in 1832. That performance caused a sensation. Within a year “Stille Nacht, Heilige Nacht” was published as sheet music and became a bestseller.

By then the original composers had been mostly forgotten, and their work was widely thought to be a traditional Tyrolean folk song. It was only in 1854 when the court musicians of the Prussian King Friedrich Wilhelm IV looked into the provenance of the hymn that they stumbled on the identity of the real composers.

Franz Gruber was still alive to verify his co-authorship, and to ensure his priest friend received his due credit.

Neither ever made any money out of their song.

The English version of “Silent Night” came into being in 1859, some 20 years after it was first performed there by another family singing group from Fügen.

John Freeman Young, an Episcopalian (Anglican) minister in New York, translated three of Fr Mohr’s original six verses. Or, it is more accurate to say that he interpreted them. For the most part, his lyrics are not direct translations, but they are very much within the spirit of the German original.

Young, who went on to become a bishop in 1867, published his translation as part of a 16-page pamphlet titled Carols for Christmas Tide.

“Stille Nacht, Heilige Nacht” has since been translated into at least 140 languages.

How did it end?

And what became of the composers?

Fr Mohr left Oberndorf in September 1819 and went on to minister in several parishes around Salzburg.

From 1837 he served in the town of Wagrain. A socially engaged priest, he built a new school there to broaden the scope of education. Moreover, he established a fund to enable the children of poor parents to receive an education. He also built homes for the aged and for the indigent.

Fr Mohr died of lung disease on December 4, 1848, a week short of his 56th birthday. He left nothing but his ragged cassock. The lyricist for one of the most famous songs of all time died a pauper; a fundraiser had to be held to bury him.

Franz Gruber continued to compose music. Some 90 songs are credited to him, but none nearly as successful as “Stille Nacht, Heilige Nacht”. In 1833 he moved to the town of Hallein where he died in 1863 at the age of 75.

St Nicholas church, where the parishioners of Oberndorf heard the premiere of the world’s most famous Christmas carol, doesn’t exist anymore in the same place. Repeated floods, causes by the straightening of the river Salzach, damaged the entire village which was moved upstream after 1899.

Some of the interior of the old church was transferred to the new village — unfortunately not the organ which Gruber had built in the 1820s. The original church, with its roots in the 12th century, was eventually demolished.

In its place there is now a chapel, completed in 1936, dedicated to Fr Joseph Mohr, Franz Gruber and their Christmas hymn.