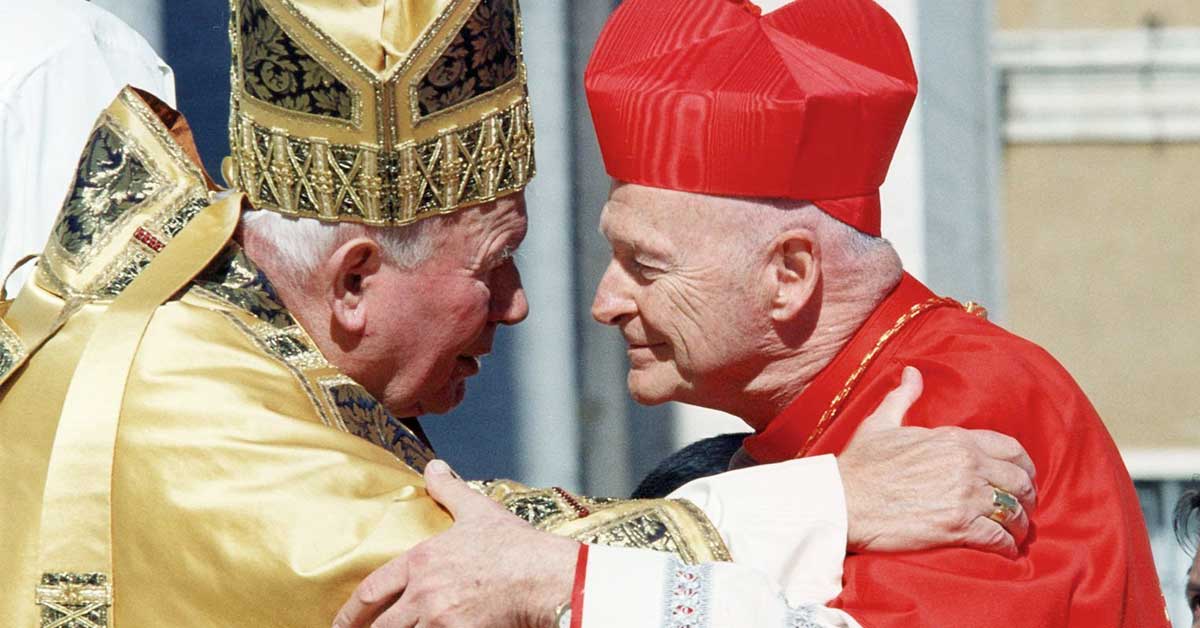 By Mark Pattison – One month to the day that the Vatican released its report on since-laicised cardinal Theodore McCarrick, a panel of academics took a close look at what one called a “hyperclerical culture” that allowed McCarrick’s sexual misconduct to go unchecked.

“Silence is dangerous,” said John Carr, director of the Initiative on Catholic Social Thought and Public Life at Georgetown University, a co-sponsor of the Dec 10 dialogue, “The McCarrick Report: Findings, Lessons and Directions,” and who himself had been subject to sexual abuse when he was a seminarian. “Hyperclerical culture can be horrific – and their decisions reflect that.”

“When I read it, I said to myself, no wonder nobody believed me,” said Juan Carlos Cruz, a survivor of clergy sexual abuse in Chile who was later welcomed to the Vatican by Pope Francis to share his experience and recommendations. “The clericalism here, the camaraderie — badly understood camaraderie — the brotherhood of these bishops. It’s appalling, it’s appalling.”

“What makes this crisis different? The answer is in this report. The clerical and hierarchical culture that enabled and covered up this abuse … the way sexual crimes and sacramentality were intertwined,” said Kathleen Sprows Cummings, director of the Cushwa Center for the Study of American Catholicism at the University of Notre Dame.

“I was particularly chilled to read the quote from McCarrick when he was rubbing the shoulders of a victim, ‘Someday I will lay hands on you when I ordain you,'” Cummings said. “This is an insider’s report. The layers are deep and very damning.”

The report “really pulls back the curtain on the process for selecting bishops in the church,” said David Gibson, director of the Center on Religion and Culture at Fordham University in New York City, the other dialogue co-sponsor.

Ask most Catholics how the pope is chosen, and they can give at least an outline of the conclave, Gibson said.

But “ask any Catholic how their own bishop is chosen, nobody can tell you,” he added. “Nobody knows the candidates, nobody knows anything about the process. There is a process, but this report shows how the process was corrupted.”

That the report was published may be its greatest strength, said Carr, who gave credit to Pope Francis for authorising it. “I don’t know whether Georgetown or Fordham would do this,” he added, “except under subpoena.”

Cruz, too, gave credit to Pope Francis. “He’s fallible, he makes mistakes. He said in a letter to the world. He made a mistake and he apologized” about his previous denial of widespread clerical sex abuse in Chile. “I’m not his spokesperson, but I love him dearly. He’s done so much compared to what we’ve seen,” he said.

Carr said a weakness of the report was its “dismissal of money as a part of McCarrick’s rise. It acknowledges he raised a lot of money, gave a lot of money away, but says it didn’t play a decisive role in his rise. It didn’t hurt. … McCarrick made sure everyone knew he was a good fundraiser.”

Cummings cited the “absence of lay voices” in the report. “We all agree that clerical culture is the main cause of this crisis,” she said.

The issue of St. John Paul II’s role in the crisis arose during the dialogue. Cummings noted it was St. John Paul who reduced from 50 years to five the wait time to consider a person for sainthood “to provide more contemporary heroes for the church.” John Paul himself was canonised in 2014, nine years after his death.

“There’s no question of decanonisation, that’s not even a thing,” Cummings said. But it is “highly doubtful any cause would be opened on his behalf now, based on what we know now about McCarrick,” she added, and it may be generations before any high church official would be viewed as a sainthood candidate.

Cummings said Archbishop Fulton Sheen’s beatification in late 2019 was postponed over an allegation he had mishandled clergy sex abuse claims while he was bishop of Rochester, New York, from 1966 to 1969.

“There’s so much we don’t know about the layers of complicity in sex abuse,” she said, which is “all the more reason to wait.”

Gibson said clerical culture as revealed in the report is “not just an old-boys network where they cover for each other. It shows how much they hate each other. So much of what had gone on, how much backstabbing and conniving and jockeying for power and position. That is so unhelpful for the church.”

He added, “This culture treats the church as a possession as a thing to be dominated, a game to be played, and there’s no mention of the Gospel or the flock. And that’s got to change.”

“McCarrick got wind of this and sent an impassioned letter to the pope’s secretary,” which convinced St. John Paul to go ahead with the appointment. “I don’t know if he should be a saint,” Carr said, “but lots of people were deceived by McCarrick.”

Panelists expressed disdain for Archbishop Carlo Maria Vigano, the former papal nuncio to the United States, who in a 2018 letter pointed fingers of blame at Pope Francis and others over the McCarrick scandal.

Cruz derided Archbishop Vigano “and his QAnon theories.” QAnon is a discredited conspiracy theory that a cabal of Satan-worshipping paedophiles is running a global child sex-trafficking ring and plotting against U.S. President Donald Trump.

Gibson said Archbishop Vigano “transformed himself into the Great Accuser … operating his own campaign from some undisclosed location.”

Carr recalled when, at the end of a meeting with Archbishop Vigano, he appealed to the nuncio to not have now-retired Archbishop John C. Nienstedt appointed as archbishop of Minneapolis and St. Paul.

“I’m from St. Paul, Minnesota, it’s my home diocese. Nienstedt can’t be bishop there for a variety of reasons,” Carr said he told Archbishop Vigano. “Without pausing a beat, he said, ‘We can’t give in to the enemies of the church — the media, the lawyers.'”

Archbishop Nienstedt himself has been accused of sexual misconduct with adults in the 1980s and 1990s. The archbishop, who is restricted from public ministry, has maintained his innocence.

Gibson said sexual misconduct toppled the Hare Krishna movement, and threatens to do the same to the Boy Scouts of America. No institution has yet shown how to recover from such a scandal.

“There’s a responsibility and opportunity for the Catholic Church to show how it can be done,” he added.

“I truly believe there are many more good people in the church than bad ones,” said Cruz, now an executive in Philadelphia. “But the bad ones, they’re a minority, linked to power and money.”

Cummings said some may want to “let the church off the hook: ‘Well, we fixed that problem.’ ‘This problem disappeared in 2002.’ That’s not the case.”