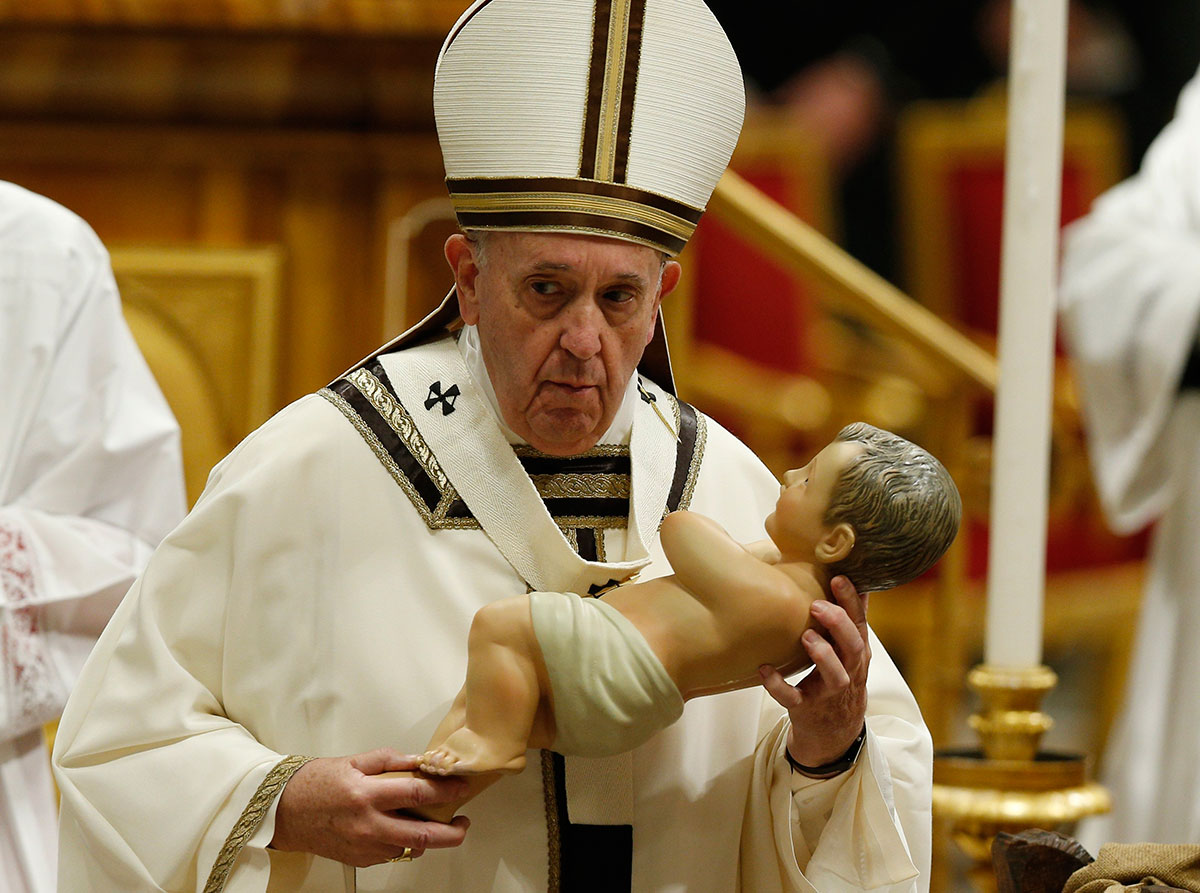 Pope Francis carries a figurine of the baby Jesus as he leaves Christmas Mass in St. Peter’s Basilica at the Vatican on Dec. 24, 2019. The pope will celebrate the traditional Christmas Eve Mass with a small congregation; the Mass will begin at 7:30 p.m. in Rome so people can get home without breaking Italy’s 10 p.m. COVID-19 curfew. (CNS photo/Paul Haring)

The Vatican’s liturgy congregation will permit priests to say up to four Masses on Christmas Day, the Solemnity of Mary, Mother of God on January 1, and Epiphany to accommodate more worshipers amid the pandemic.

Cardinal Robert Sarah, prefect of the Congregation for Divine Worship and the Discipline of the Sacraments, signed a decree announcing the permission Dec. 16.

The decree said that diocesan bishops may allow priests in their diocese to say up to four Masses on the three solemnities “in view of the situation brought about by the worldwide spread of the pandemic, by virtue of the faculties conceded to this Congregation by the Holy Father Francis, and due to the persistence of the general contagion of the so-called COVID-19 virus.”

According to the Code of Canon Law, a priest ordinarily may celebrate Mass just once per day.

Canon 905 says that priests may be allowed by their local bishop to offer up to two Masses per day “if there is a shortage of priests,” or up to three Masses per day on Sundays and Holy Days of Obligation “if pastoral necessity requires it.”

Restrictions in place in some parts of the world, aimed at controlling the spread of the coronavirus, limit the number of people present at liturgies and some parishes have been offering extra Masses on Sundays and during the week to allow more people to attend.

Christmas Day and January 1 are solemnities and therefore required days for Catholics to attend Mass. In the United States, the Solemnity of Epiphany has been moved to Sunday.

During the pandemic, some bishops have dispensed Catholics in their diocese from the obligation to attend Mass on Sundays and Holy Days of Obligation if attendance would put them at risk of contracting the virus.