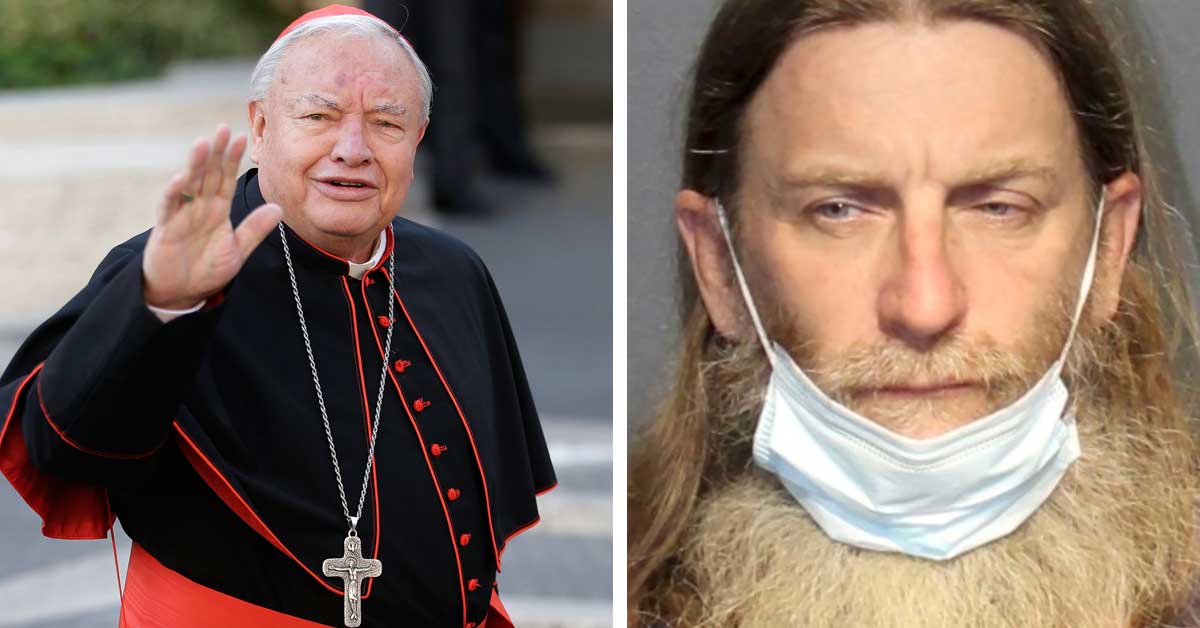 (Left) Cardinal Juan Sandoval Iniguez, retired archbishop of Guadalajara, Mexico, is pictured in a March 4, 2013, photo. Facebook has removed a video column by Cardinal Sandoval in which he spreads conspiracy theories about COVID-19 and Bill Gates. (CNS photo/Max Rossi, Reuters) (Right) Robert Keith Packer poses for a booking photograph after being arrested on a federal warrant at the Western Tidewater Regional Jail in Suffolk, Va., Jan. 13, 2021. The International Auschwitz Committee is welcoming the arrest of Packer, who was photographed wearing a “Camp Auschwitz” T-shirt during the U.S. Capitol riots Jan. 6. (CNS photo/Western Tidewater Regional Jail handout via Reuters)

Semanario Arquidiocesano Guadalajara — an information service operated by the Archdiocese of Guadalajara — posted a screenshot from the video on its Facebook page Jan. 13, along with the text, “Cardinal Juan Sandoval denounced the imposition of a new world order, hours later his video was censored.” It also posted the video on its regular website, along with a story on its removal.

The screenshot of the inaccessible video prominently announced, “False information,” and explained, “This publication repeats information about COVID-19, which independent fact-checkers indicated is false.”

In the video – titled “Plot of a new world order” – Cardinal Sandoval started by saying, “This will go for a long time.”

He continued, “This pandemic won’t end in a month or two months, perhaps not this year, perhaps not in three, four, five, six years. That’s what these men want.”

The cardinal mentioned conspiratorially Microsoft founder and health philanthropist Bill Gates and alleged a U.S. laboratory had a strain of another virus ready. He then started speaking of one-world government.

Cardinal Sandoval, 87, has detoured into conspiracies throughout the pandemic and publicly questioned health precautions such as closing businesses and cancelling services. He has also minimised the impact of the illness and dispensed erroneous medical advice.

He is currently retired archbishop of Guadalajara – where he was leader for 17 years until his retirement in 2011. Father Antonio Gutiérrez Montaño, archdiocesan spokesman, said Cardinal Sandoval has no official responsibilities in the Archdiocese of Guadalajara and his opinions are his own.

The archdiocese reposted Cardinal Sandoval’s commentary to the website of its newspaper Semanario.

Throughout the pandemic, dioceses across Mexico have closed churches at times, celebrated Mass with limited occupancy and canceled pilgrimages and feast days, including the Dec. 12 feast of Our Lady of Guadalupe at her namesake shrine.

Controversy over the cardinal’s comments came as parts of Mexico experienced a worsening of the pandemic, with hospital beds becoming scarce and daily death tolls regularly topping more than 1,000, in a country with very little testing.

COVID-19 has claimed the lives of clergy, too. Father Gutiérrez said 120 priests — roughly 10% of clergy in the archdiocese — had contracted COVID-19, and eight priests had died of the disease.

The International Auschwitz Committee welcomed the arrest of a man who was wearing a shirt emblazoned with the words “Camp Auschwitz” during the storming of the U.S. Capitol Jan. 6.

The German Catholic news agency KNA reported Jan. 14 that Christoph Heubner, committee vice president, said it was equally disturbing that “Nazis all over the world have moved from the denial of Auschwitz to glorifying this murder factory.”

U.S. media reported that police arrested Robert Keith Packer in Virginia Jan. 13 after a federal court issued an arrest warrant for him. He was charged with illegal entry in a restricted building and disorderly conduct on Capitol grounds.

Many images taken during the storming showed Packer wearing the black “Camp Auschwitz” shirt with a skull and the words “Work Brings Freedom,” a translation of the German inscription “Arbeit macht frei” on the gate of the Auschwitz concentration camp. The sight caused international outrage.

Auschwitz was the biggest Nazi death camp; approximately 1.1 million people, most of them Jews, were murdered there.

The International Auschwitz Committee, based in Berlin, is an association of Auschwitz survivors and their organisations from 19 countries.

After a flurry of court decisions, the Supreme Court reversed a pair of rulings from federal appeals courts that had put death-row inmate Lisa Montgomery’s execution on hold, and it denied two other last-minute requests to postpone the execution. Montgomery was put to death by lethal injection at the federal prison in Terre Haute, Indiana, soon after the court’s decision at 1:31 a.m. (EST) Jan. 13.

She was the first woman to be put to death in federal prison since 1953.

After the court’s decision, Sister Helen Prejean, a Sister of St. Joseph of Medaille and longtime death penalty opponent, tweeted: “In yet another after-midnight ruling, the U.S. Supreme Court has allowed the federal government to proceed with Lisa Montgomery’s execution immediately.

This decision will forever be a scarlet letter for the SCOTUS – a complete failure to protect our most vulnerable citizens.” It has been held that Lisa Montgomery suffered mental illness.

Kelley Henry, Montgomery’s attorney, said in a Jan. 13 statement: “The craven bloodlust of a failed administration was on full display tonight. Everyone who participated in the execution of Lisa Montgomery should feel shame.” Catholic leaders have been pleading for an end to the death penalty and urging leaders to stop this practice.

Australia’s financial crime watchdog agency said it over-estimated by the equivalent of more than US$1.5 billion the amount of money transferred from the Vatican to Australia between 2014 and 2020.

In a statement Jan. 13, the Vatican said discovery of the “considerable discrepancy” was the result of collaboration between the Australian Transaction Reports and Analysis Centre (AUSTRAC) and the Vatican Supervisory and Financial Information Authority, the financial crimes watchdog agencies of Australia and the Vatican, respectively.

In December, AUSTRAC had reported that $2.3 billion Australian dollars (US$1.8 billion) in Vatican funds had been transferred to Australia from the Vatican between 2014 and 2020. Catholic officials in Australia and at the Vatican had said the sum was implausible, mainly because the Vatican does not have that kind of money.