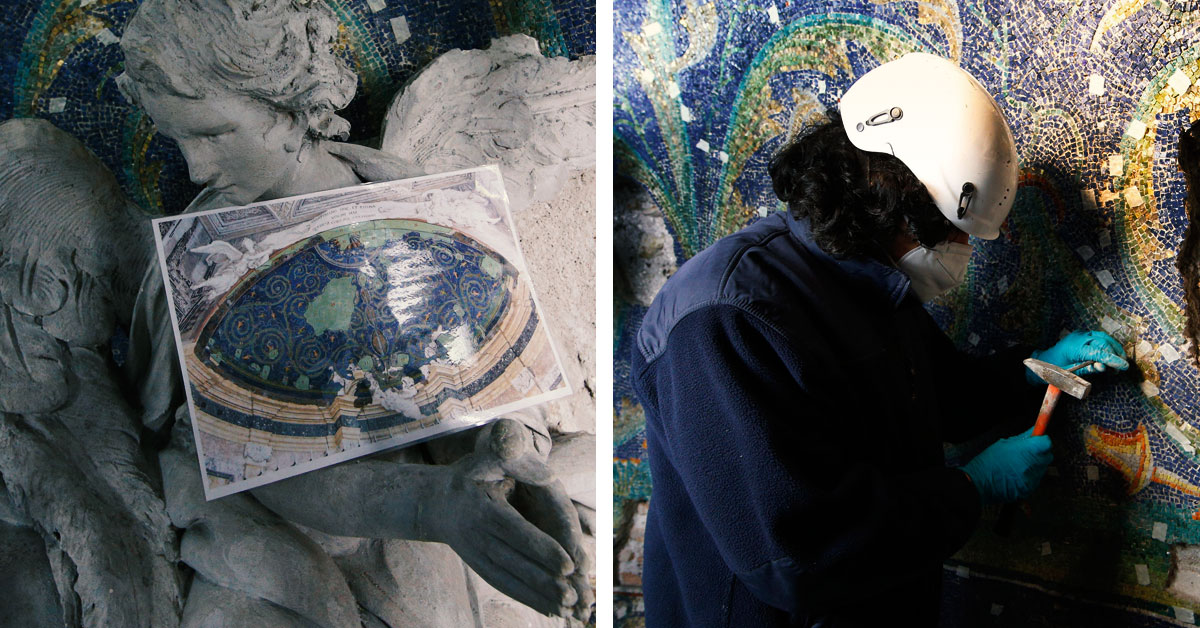 (Left) A statue of an angel is pictured during the restoration of mosaics from the 5th century in the historic vestibule of the baptistery at the Basilica of St John Lateran in Rome. (Tight) Daniele Belladonna works near a missing section of a mosaic. Vatican restorers are tackling one of the oldest mosaics in Christianity, dated to around 450 AD. (CNS photo/Paul Haring)

By Carol Glatz –  Even though the baptisms the pope celebrates most years in the Sistine Chapel are better known, the most important place to be baptised in Rome for the past nearly 1,600 years has been the baptistery of St John Lateran.

The ancient baptistery was built in 440 A.D. just behind the Basilica of St John Lateran, which was the first Christian basilica founded in Rome by Emperor Constantine in 324 A.D.

For generations, it had been the only baptistery in Rome, and, according to the baptistery website, there has never been a year since it was built that a baptism has not been celebrated within its walls.

Almost as old as the fifth-century structure itself, there is a half-dome of mosaics from about 450 A.D. decorating a side chapel, and experts believe they are among the oldest mosaics in Christianity.

“But there’s a problem here. A restoration problem. So the Patrons of the Arts in the Vatican Museums have stepped forward once again” to dedicate the funds needed to restore the badly damaged and important piece of Christian art and history, Mary Angela Schroth, the project’s coordinator, told Catholic News Service.

Most often, water, time and grime are an artwork’s worst enemy, but sometimes the damage is caused by past restorers. That is what mosaicist Roberto Cassio and his small team from the Vatican Museums found when they set up scaffolding and got a close look at mosaics in the chapel’s small apse and on a side wall, Schroth said.

For example, a huge metal clamp juts out from the sidewall, jerry-rigging into place a large panel of stone mosaics embedded in cement – one of the worst mediums to use for supporting mosaics, Cassio told CNS.

Cement is too heavy, too rigid and “irreversible” when future repair or removal is needed, he said. Also, soluble salts in the cement eventually form “crystals” that damage the mosaic surface.

He said they will remove the cement supports and use a lighter mortar, more in line with current conservation methods.

One restorer in early December was cleaning the marble fragments on the sidewall after the cracks and grout work were repaired. Some pieces of dark green serpentine from Greece, red porphyry from Egypt and white palombino from Italy are different shades, Cassio said, since early artisans often culled their materials from assorted Roman ruins and monuments.

Schroth said the mosaics are one of the few examples of “opus sectile” – the technique of cutting and inlaying stone to form pictures or patterns – to still be in the same place where they were created, rather than having been moved to a museum.

“It is a miracle it has survived to our day,” Cassio said.

While the cleaning and repairing of the stone mosaic on the sidewall will be fairly routine, the work on the glass mosaics in the apse will be more innovative, Schroth said.

The mosaics in this chapel, dedicated to Ss Cyprian and Justina, are opaque tiles of glass, which offer mosaicists many more colours to choose from than the limited palette of stones.

There is a different “recipe” for each colour using different minerals and colourants so that when the glass is forged in a furnace, the additives react to the heat, making a unique colour, he said.

What made early Rome stand apart from other cities with its mosaic work was the desire that images look more like paintings, he said, so early artisans kept coming up with “new recipes” for new colours, which numbered some 20,000 hues in the 1700s, resulting in “spectacular creations.”

Today there are more than 26,000 colours available, said Cassio, a third-generation mosaicist, who started helping his family’s business when he was 10.

Cassio said using glass and gold mosaics in chapels could create magnificent effects if they were set inclined in a certain way so they could reflect interior and exterior light onto the congregation below.

“The mosaic emerges as a reflection of divine light,” an expression of the divine, he said.

The mosaics – which depict a brilliant blue background covered in leaf spirals and either white angel’s trumpet flowers or calla lilies – are pock-marked with gaps where original tiles have been lost.

These lacunae had been “filled in” using paint during the last restoration in the 1940s, but Cassio said they are working with a 130-year-old mosaic tile shop in Venice to reproduce the missing glass tiles — about 660 lbs. (300 kg) worth or some 300,000 tiles in 40 colours.

However, “It is important you can tell the difference” between the original work and the new 21st-century touch-ups, he said.

According to modern-day standards of restoration, a piece of artwork is like a document that must not be altered, but interpreted, and any reconstruction should be recognizable as such.

To do that, Cassio and his team will use tiles with the same colours as the originals, but with “a slightly different tonality” or shade, and they will be set in mortar a few millimetres below the current surface, so even though future restorers will see which parts are new, admirers below will see one smooth, unbroken image.

The restorers are using old photographs and drawings to see what the mosaic looked like before the 1940s restoration, which had “violated the integrity” of the artwork when workers detached the mosaics “in blocks” and embedded them in cement, he said. This altered what had been there since a previous restoration in the 1600s.

The symbols of new life from death, sacrifice and purification are replete in the mosaic’s images of a lamb, doves, white flowers and what may be a silver sword or spear, perhaps evoking the lance that pierced the side of the crucified Christ, from which came out blood and water, signs of his humanity, divinity and baptismal waters.

The baptistery itself, founded on top of a Roman thermal bath, “is linked to the spiritual growth of Christianity and, of course, of our Catholic Church,” Schroth said.

Each element comes together to reinforce “the idea of baptism as renewal, purity, being such a major sacrament and of course being linked to the importance of this building,” she said.

With the help of the Vatican Museums and its patrons, Schroth said, “we want to make the site of the Lateran baptistery a destination for faith, a destination to understand what is baptism” and how “the story of our faith is linked to its artistic and historical monuments.”