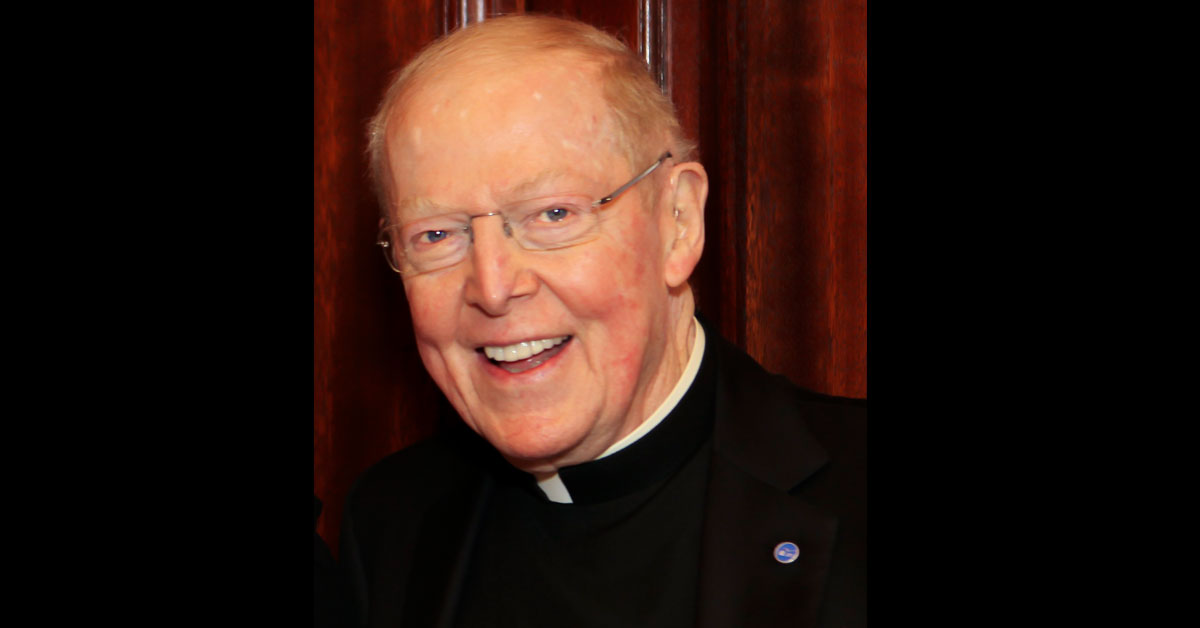 Jesuit Father Leo O’Donovan is seen in this 2018 file photo. The priest, former president of Georgetown University who is currently the director of mission for Jesuit Refugee Service, will deliver the invocation at the presidential inauguration of Joe Biden Jan. 20. He told National Catholic Reporter that Biden had personally called him and invited him to say invocation and he accepted. (CNS photo/Celia Rogge, courtesy JRS)

The priest, a friend of the Biden family, was the main celebrant at the funeral Mass for Biden’s son Beau in 2015 at St. Anthony of Padua Parish in Wilmington, Delaware.

He confirmed with National Catholic Reporter Jan. 6 that he would be delivering the invocation, saying Biden had personally called him and invited him, which he accepted.

This year’s scaled-back public inauguration ceremony, due to the pandemic, will take place on the west side of the U.S. Capitol Building in Washington, a site taken over Jan. 6 by rioters contesting the certification of the 2020 presidential election. President Donald Trump announced Jan. 8 that he would not attend the ceremony.

In leading the prayer of blessing, Father O’Donovan, who is currently director of mission for Jesuit Refugee Service, will follow the footsteps of his predecessor at Georgetown, Jesuit Father Timothy Healy, who offered a prayer during the inauguration of President Ronald Reagan in 1985.

The tradition of invocations at presidential inaugurations goes back to 1937 and Catholic leaders have been in this role for several presidents. The Southern Baptist minister, Rev. Billy Graham, offered this prayer for presidents Richard Nixon, Bill Clinton and George W. Bush.

In 1961, when John F. Kennedy was sworn in as the first Catholic president, Boston Cardinal Richard J. Cushing delivered the invocation, which said in part: “Strengthen our resolve, oh Lord, to transform this recognition of others into a principle of cooperation. Inspire us to practice this principle of cooperation both in ideal and action in these most dangerous, but soul-stretching times.”

His prayer included a description of the time saying: “In these days of tragedy and crisis all that we hold dear is challenged — belief in God, respect for human responsibility, honour, integrity, and every freedom of the human spirit. All these are at stake and our country, champion of truth and justice, must lead the nations of the world to the dawn of a brighter hope.”

Twenty years later, in 1985, Father Healey who was then Georgetown University’s president, delivered the invocation at Reagan’s inauguration, urging the crowd to join him in saying the Our Father.

A Catholic leader didn’t lead say a prayer at another presidential inauguration until 2017 when New York Cardinal Timothy M. Dolan was one of several religious leaders at Trump’s inauguration ceremony. The cardinal read a brief passage from the Book of Wisdom which said: “Give us wisdom, for we are your servants, weak and short lived, lacking in comprehension of judgment and of laws … Indeed, though one might be perfect among mortals, if wisdom, which comes from you, be lacking, we count for nothing.”

Most of the details for this year’s inauguration ceremony have not yet been announced, except for changes to the usual routine. Instead of a traditional parade and inaugural balls, the inaugural committee will host a virtual parade, which is expected to be similar to the virtual Democratic National Convention featuring Americans across the country along with musical acts and poets paying tribute to front-line workers during the pandemic.

The ceremony also will not include an inaugural luncheon at Statuary Hall in the Capitol, a tradition that dates back to 1897.

Invitations to the inauguration will only be given members of Congress and one guest. Former presidents and vice presidents, governors, Supreme Court justices and other high-ranking government officials also will be allowed to attend, according to the congressional committee.