President Biden: ‘Build Back Better’ for everyone, everywhere 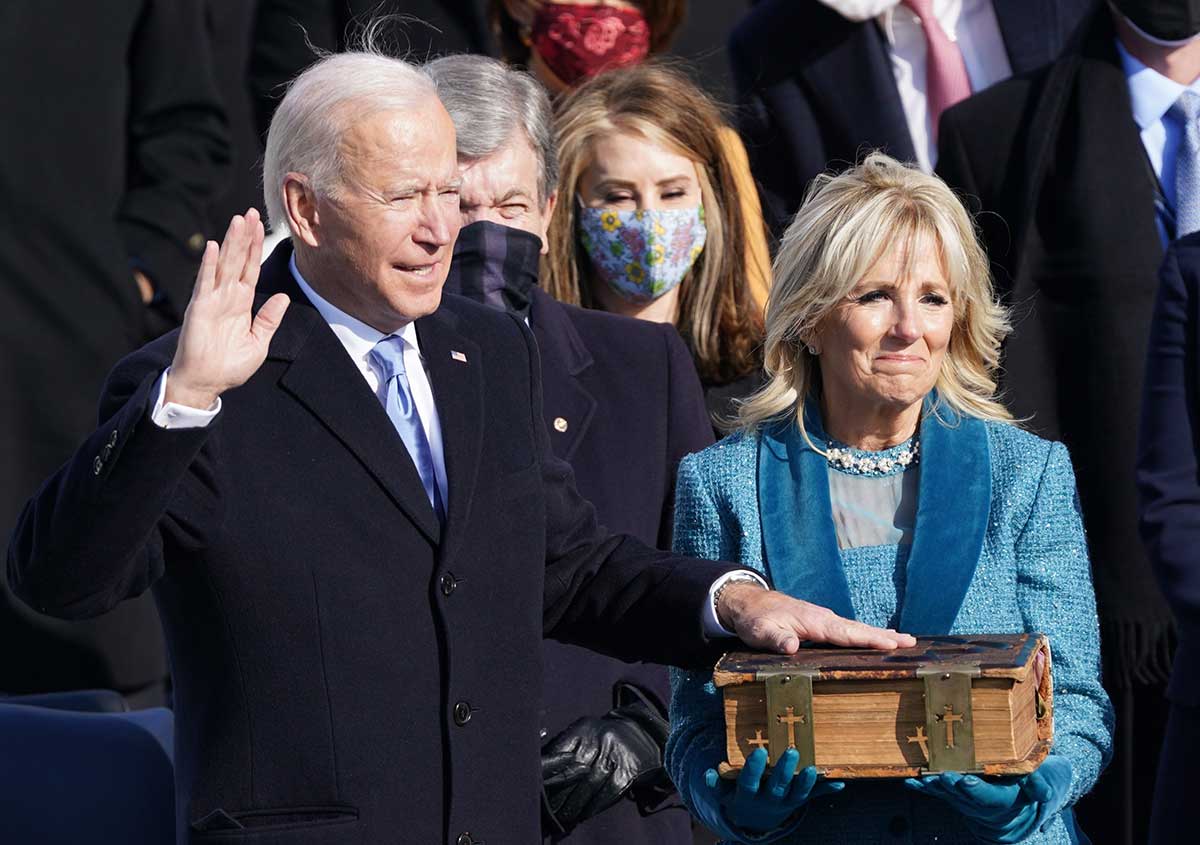 Joe Biden is sworn in as the 46th president of the United States as his wife, Jill Biden, holds a Bible on the West Front of the U.S. Capitol in Washington Jan. 20, 2021. (CNS photo/Kevin Lamarque, Reuters)

US-based Tony Magliano – With all the bumps and craters in the road to the White House, Joe Biden has finally arrived.

The new president’s “Build Back Better” plan is aimed at vigorously confronting the increasing deadly pandemic, the economic crisis, racial injustice and climate change – all issues Pope Francis has insisted need to be set right.

And there is no shortage of other grave issues that also need to be set right.

Nuclear weapons truly threaten all life on earth. An alarming example of this insanity is that the U.S. and Russia have hundreds of nuclear weapons aimed at each other, armed, and ready to be used within minutes. Pope Francis has forcefully condemned as immoral even the possession of these weapons of mass destruction. And so should Biden – not to mention the U.S. bishops.

The U.N. “Treaty on the Prohibition of Nuclear Weapons” just entered into force on Jan. 22. The U.S. should vigorously negotiate with the other eight nuclear powers, and sign and ratify this highly moral treaty.

Jan. 22 marks another important date – this one being deeply lamentable. It is the 48th anniversary of the U.S. Supreme Court decision legalising abortion. Every year in the U.S. about 900,000 unborn babies are brutally dismembered and killed by legal abortions.

Unfortunately Biden is on record as being overwhelming pro-abortion. This is one issue that Catholics need to oppose the president on – with respectful dialogue and firm political pressure.

The U.S. is the world’s leading arms merchant. Therefore, the Biden administration needs to end the selling and giving of weapons which fuel many of the world’s deadly armed conflicts, and negotiate with the other arms-producing nations to do likewise.

Less than 1 percent of the U.S. federal budget is appropriated for international poverty-focused development assistance. With thousands of children dying every day around the world from hunger and hunger-related diseases, the Biden administration – as a matter of justice and compassion – needs to urge Congress to robustly increase this amount.

Alas, there are so many other moral issues that also need to be set right – like homelessness, comprehensive immigration reform and human trafficking.

Thirty years ago, while working as special assistant for public policy for Catholic Charities in the Diocese of Wilmington, I spoke one Saturday evening during Mass on social justice and peace issues at St. Patrick’s Church in downtown Wilmington, Delaware. After Mass, a parishioner said to me, “Biden was here.” And as I reflected on that, I remember hoping that my words were seeds planted by the Holy Spirit in then U.S. Senator Biden’s heart.

Of course I don’t know if my words had any impact whatsoever on now President Biden. That is known only to the Holy Spirit. But just maybe, in some small way, the Spirit found fertile soil for a seed or two to grow.

This experience speaks to me, and I hope to you, that the Spirit time and again, uses us in wonderful surprising ways – often unknown to us at the time. So it’s of the utmost importance for us to always be attentive to the Spirit’s voice and willing to act on it in our everyday comings and goings. Let’s be like St. Mother Teresa who said, “I am a little pencil in God’s hands.”

Let’s allow God to use us to “Build Back Better” – for everyone, everywhere!