Vow of poverty: Jesuits to look at its spiritual, practical implications 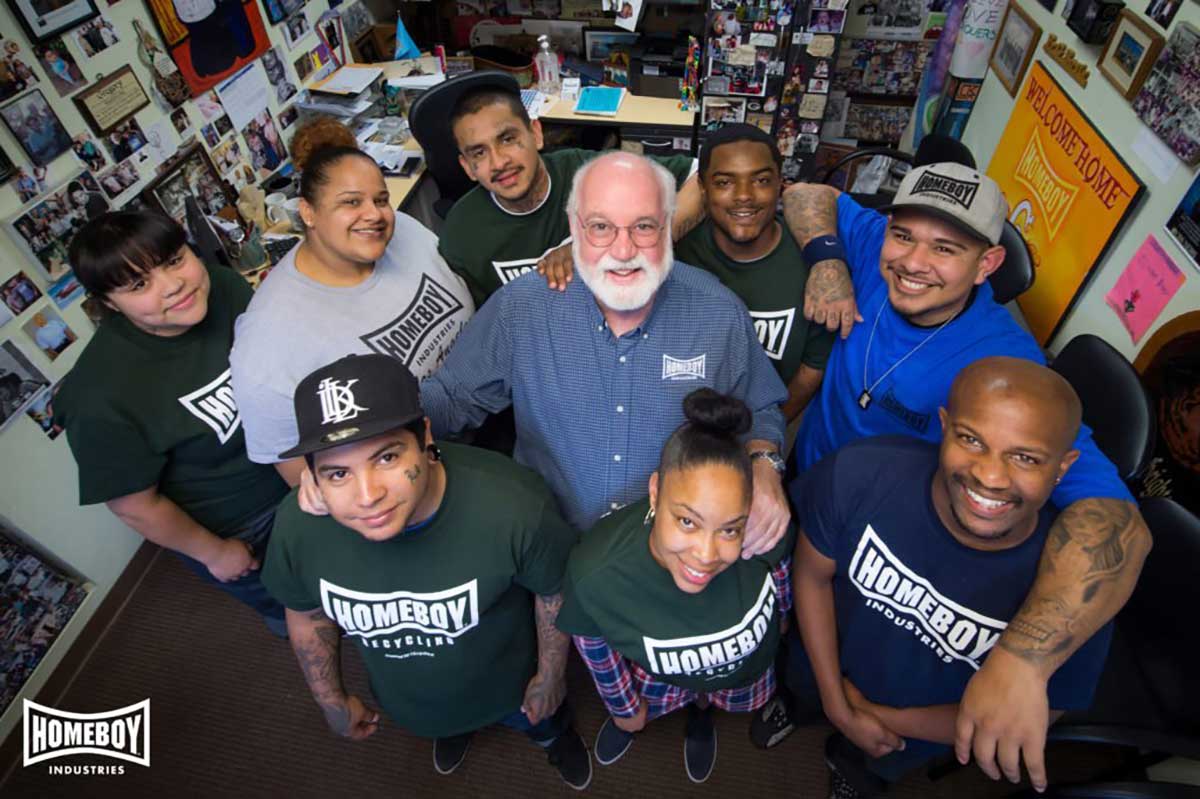 Jesuit Father Greg Boyle, founder of Homeboy Industries, poses for a photo with trainees in this undated photo. Located in downtown Los Angeles, Homeboy Industries provides hope and job training for previously incarcerated men and women and former gang members. The Jesuits, who are involved in numerous outreaches to the poor and refugees, are in the initial stages of preparing an orderwide consultation on their personal vow of poverty. (CNS photo/courtesy Homeboy Industries)

By Cindy Wooden – Many Catholics look at religious orders of men or women and wonder what their vow of poverty means. After all, the brothers, priests and nuns run schools and hospitals, have large convents or abbeys and they all pretty much know where their next meal will come from.

“Evangelical poverty” – the vow of poverty – usually will not mean living in destitution, although there are some religious men and women who see living that way as the best way to follow Christ and be in solidarity with the poor.

Living simply and not having personal property, but holding everything in common, are basic to the vow of poverty.

How the vow is to be lived out varies from order to order based on the congregation’s founding inspiration and constitutions, as well as modern needs and challenges, including prayerful responses to the poverty of the people they work with and careful stewardship of the donations they receive.

Pope Francis, during his Christmas homily in 2018, urged every Catholic to ask themselves some questions: “Do I really need all these material objects and complicated recipes for living? Can I manage without all these unnecessary extras and live a life of greater simplicity?”

The Jesuits, the religious order to which Pope Francis belonged, are in the initial stages of preparing an order-wide discussion about their own vow of poverty.

Father Arturo Sosa, superior general of the Society of Jesus, had announced the consultation in July and discussed more specific plans for it Jan. 11-15 during an online meeting with members of his “extended council,” which includes Jesuits from around the world.

Jesuit Fathers Thomas McClain, the order’s general treasurer, and James Hanvey, the secretary for the service of faith, helped prepare the meeting and spoke to Catholic News Service about the Jesuits’ vow of poverty.

Pope Francis did not order the consultation, but “he has put very much to the fore of the church’s thinking and indeed society’s thinking about the reality of the poor,” Father Hanvey said. “He himself is leading a simple life. And notice what’s very interesting about it is his availability to the poor. They are the priority. And I think that’s another facet of our vow.”

In the Jesuit constitutions, the only law St Ignatius gave regarding the vow of poverty is that “apostolic Jesuits may not live off a fixed income. We live off just remuneration for our work and from alms,” Father McClain said. “We can’t rely on an endowment to support us. We can have endowments to support the formation of the young and care for the sick and to support an apostolate, but for our personal lives we can only live off alms and just remuneration for our work.”

Going deeper, though, he said, “Ignatius presumes – or declares – that every member of the Society of Jesus has made the spiritual exercises and has responded to the invitation of Christ to be his companion and to follow him in his ways. And it’s Christ compassionate for the poor, Christ living poorly, simply, giving what he has to the poor.”

The consultation, Father Hanvey said, will be a time for each Jesuit to ask, “What does this vow of poverty mean?” and “Where does it fit into my relationship with Christ and my freedom for being sent” on mission? “And how does our lifestyle manifest that? How is it a witness to that?”

As a novice, each Jesuit does a “pilgrimage experiment” that often begins with being dropped off at a bus station with $5, some clothes and a destination to be reached in the next two weeks or so. He has to beg for food and find shelter and further transportation, relying on God and the kindness of strangers.

“The pilgrim is completely dependent on God and there’s a freedom in that,” Father Hanvey said.

The order as a whole tries to live that freedom as well, Father McClain said. In addition to vows of poverty, chastity and obedience, the Jesuits have a fourth vow of being ready to accept any mission given by the pope. That can, and often does, mean being sent with little warning to begin a new ministry in a place with few material resources, trusting that God will provide.

Father Pedro Arrupe, superior of the Jesuits from 1965 to 1983, wrote that “the temporal goods of the Society of Jesus are to be considered as belonging to our Lord Jesus Christ and as the patrimony of his poor.”

“Now imagine if you start from that position,” Father Hanvey said. “Even though you might be in charge of a big college or in charge of a large parish, if that’s your principle, then I think that changes, both spiritually and morally, your relationship to the goods that you are administering.”

And, as Pope Francis has pointed out repeatedly, one’s spiritual and moral relationship to “things” has implications for the way one relates to the environment and to the poor.

“One of the things our society does very effectively is that it makes the poor invisible,” Father Hanvey said. “It’s like the grit in the oyster; my vow of poverty keeps my eyes open in that sense.”

At the same time, Father McClain said he hoped the consultation would not focus only on the environmental impact of poverty or on how COVID-19 has unveiled deep-seated inequities and injustices in the world, because “the vow is deeper” than that: “It talks to our freedom, it talks to our heart” as companions of Jesus.

Religious vows are meant to be a witness, not a legal obligation. And the vow of poverty, he said, is a sign that “I choose to live with less for the good of others, which can be a witness against the consumerism of society. It is not something we impose on others; it’s a witness.”