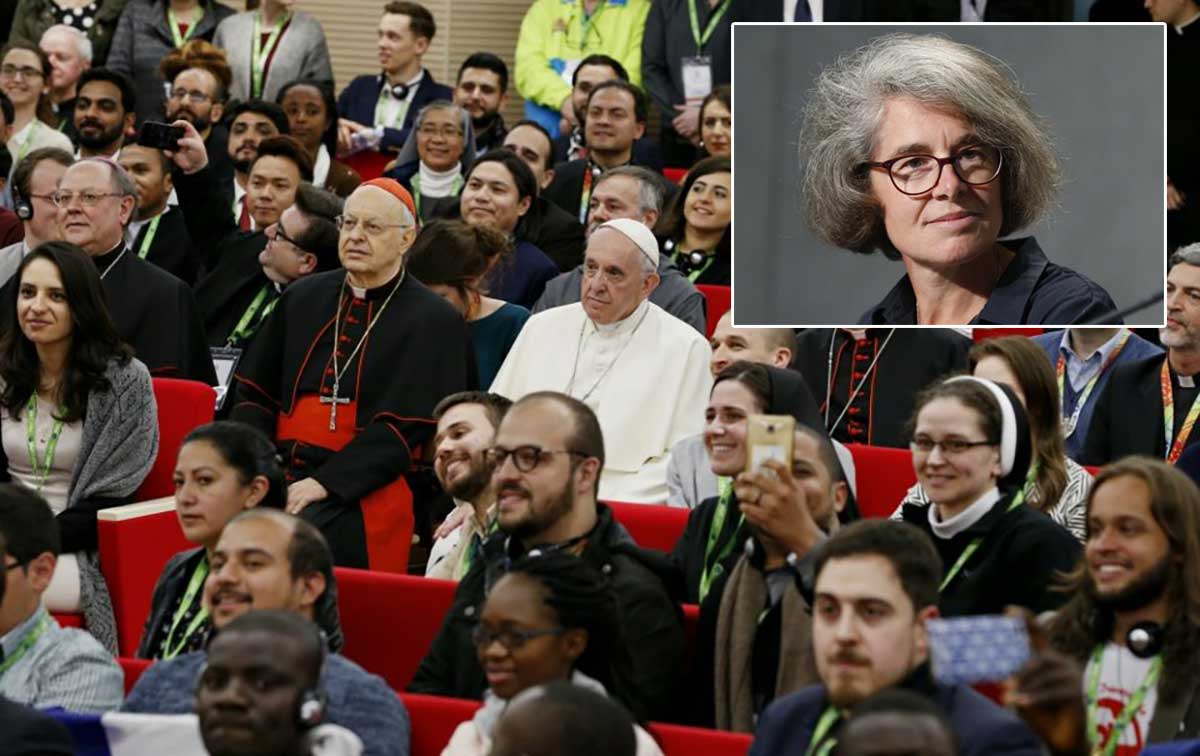 Cardinal Lorenzo Baldisseri, secretary-general of the Synod of Bishops, Pope Francis and Cardinal Kevin Farrell, prefect of the Dicastery for Laity, the Family and Life, pose for a photo during a pre-synod gathering of youth delegates in Rome. (Inset) Xaviere Missionary Sister Nathalie Becquart. (CNS/Paul Haring)

Pope Francis named the French sister one of two undersecretaries of the Synod of Bishops.

Cardinal Mario Grech, secretary-general of the Synod of Bishops, was asked by Vatican News if Sister Becquart having the right to vote at the synod would open the possibility to other women as well. Although the issue has been raised increasingly in the synod hall, until now only bishops and a few priests and brothers belonging to religious orders have had a vote.

Pope Francis, Cardinal Grech responded, has “highlighted several times the importance that women be more involved in the processes of discernment and decision-making in the church,” and in recent synods, the number of women participating as nonvoting experts or and observers has increased.

“With the appointment of Sister Nathalie Becquart and the opportunity that she will participate with the right to vote, a door has been opened,” Cardinal Grech said. “We will then see what other steps could be taken in the future.”

Sister Becquart, who was an observer at the 2018 Synod of Bishops on young people, was named a consultant to the Synod of Bishops in 2019. She told Catholic News Service at the time that the appointment was “a symbolic and effective step toward appointing more women at the Curia, and it reflects Pope Francis’ desire to give more places to women at all levels of the church.”

Sister Becquart, the former director of youth evangelisation and vocations for the French bishops’ conference, also said in the interview she was convinced more progress would come.

“Changes will come with the new generation as more and more young people – not only young women but also young men – ask for women’s equality,” she said. Added hope comes from meeting “more and more priests and bishops now that are speaking out for women. I have seen an evolution; at the beginning, the question of women in the church was a question from women, and now it is also an important topic for many men, priests and bishops – and even the pope!”

But one will not be able to say there is true collaboration between men and women at all levels of the church until there are “more women in leadership positions and decision-making processes,” she said.

Obviously, the pope should continue appointing women to councils and dicasteries, she said. But she also had another idea: “Another symbolic step could be, for instance, that he ask a woman to lead the spiritual retreat for the Curia one year.”