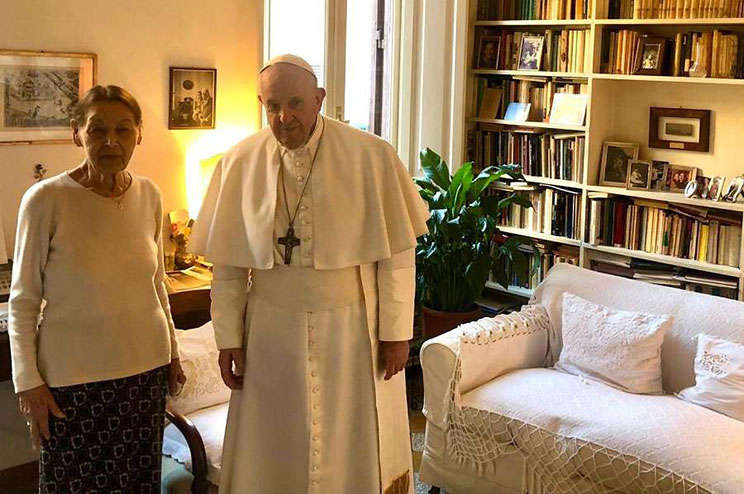 Pope Francis on Saturday visited the home of the writer and Holocaust survivor Edith Steinschreiber Bruck in Rome.

The 89-year-old Bruck is Hungarian-born, but has lived in Italy since her early 20s. She survived the Nazi concentration camps in Auschwitz and Dachau, where she was sent with her parents, two brothers, and a sister at the age of 12.

Her parents and one brother died in the concentration camps. Bruck and her remaining siblings were freed from the Bergen-Belsen camp by the Allies in 1945.

According to the Vatican, in a meeting of around one hour on Feb. 20, Bruck and the pope spoke about “those moments of light which marked the experience of the hell of the concentration camps.”

Their conversation also touched on the “fears and hopes for the time we live in, underlining the value of memory and the role of the elderly in cultivating it and passing it on to the young.”

When he greeted Bruck, Pope Francis said, “I came here to thank you for your testimony and to pay tribute to the people martyred in the madness of Nazi populism.”

“And I sincerely repeat to you the words I spoke from my heart at Yad Vashem and which I repeat in front of every person who, like you, has suffered so much because of this: ‘Forgiveness, Oh Lord, on behalf of humanity!’” he said, according to a Vatican communication.

After 1945, Bruck returned to Hungary and then went to Czechoslovakia where a sister was living. She married for the first time when she was 16 years old and moved to Israel. That marriage ended in divorce after one year, and was followed by two more marriages and divorces.

Bruck moved to Italy in 1954, where she married Nelo Risi, an Italian poet, film director, translator, and screenwriter who died in 2015 after a long battle with a neurodegenerative disease.

During World War II Risi had fought on the Russian front and been imprisoned in a Swiss internment camp.

Bruck published a memoir about her time in the concentration camps and the years after in Italian in 1959. In 2001 it was translated into English with the title “Who Loves You Like This.”

In recent years, Bruck has continued to speak about the Holocaust in schools and universities.