US Debate: What Works to Get, and Keep, People out of Poverty 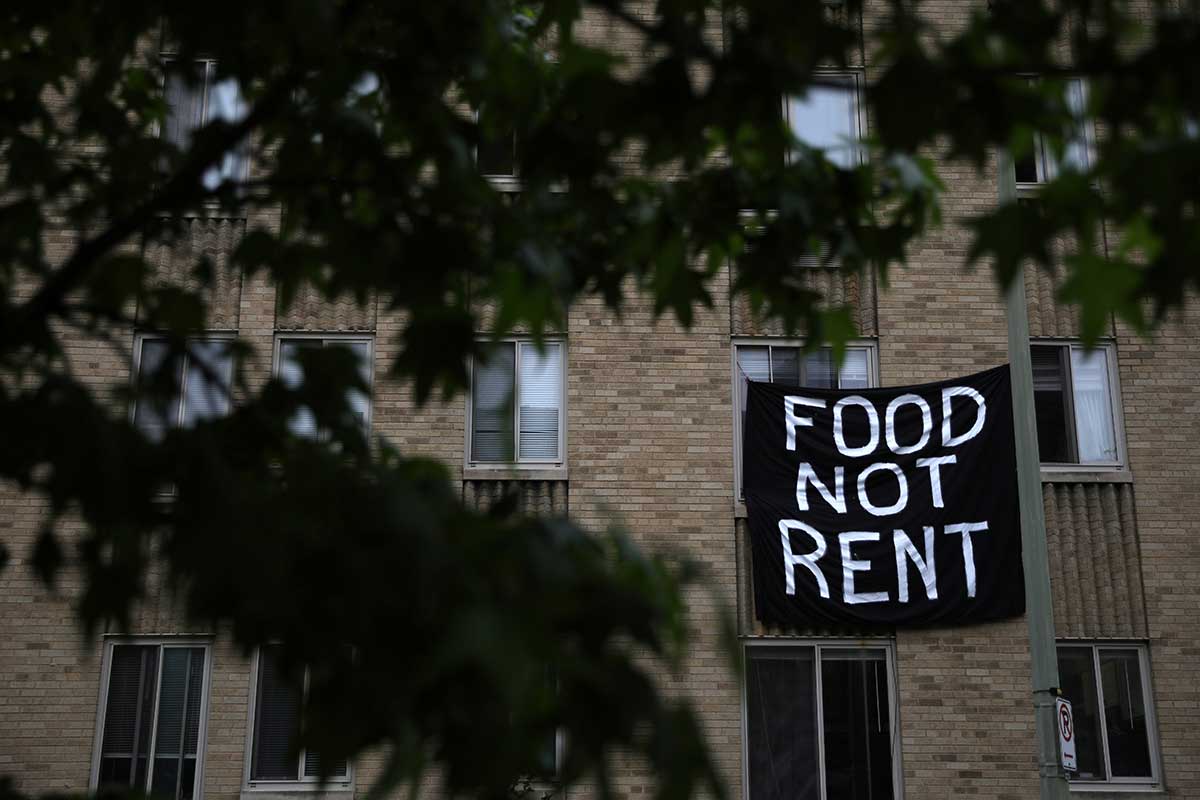 A sign made from a sheet hangs from a window of an apartment building in the Columbia Heights neighbourhood in Washington May 18, 2020, about people’s inability to pay rent amid the coronavirus pandemic. (CNS photo/Tom Brenner, Reuters)

By Mark Pattison – What methods work best at getting people out of poverty – and keeping them out – was the subject of debate during a March 1 online forum hosted by Georgetown University.

“We are in a moment right now that will define us, definitely as a nation, but as a people and as a person,” said Lorena Melgarejo, executive director of Faith in Action Bay Area in San Francisco, during the forum, “Overcoming Poverty as a Moral Imperative and National Priority: Towards ‘A Better Kind of Politics.'”

“The people who are actually in poverty know the way to define the problems and they also know how to define the solutions,” Melgarejo said.

“One of the challenges is that government is the way that we work as a collective,” said Maria Cancian, dean of the McCourt School of Public Policy at Georgetown, which co-sponsored the forum with the university’s Initiative on Catholic Social Thought and Public Life. “One of the things that COVID has demonstrated is that we have really cut too many corners as a collective.”

“Our lack of investments in public health, in child care infrastructure, in basic supports for families have left us vulnerable to truly catastrophic outcomes,” Cancian added. “Over the last 25 years, we have built a system that focuses more on encouraging personal responsibility and enforcing work than it does in supporting parents’ ability to care for their children.”

“We need to constantly recognise that everyone has dignity and everyone has potential, and we should celebrate the first and maximize the second,” said Robert Doar, president of the American Enterprise Institute. “Sometimes we focus only on material resources, money and income, but reducing poverty in America is going to be about a lot more than that.”

But Doar voiced caution about monthly cash supports. “What we’re turning to now is a federal takeover of direct benefits into households with no human interaction. And I’m very concerned about that,” he said. “I don’t think that is the best way to serve struggling Americans.”

His cautions were met with resistance by other panelists.

Melgarejo, a single parent – her husband died of cancer when their child was 3 years old – said: ” I had to make the sacrifice to go out into the workplace so that I could pay for rent, pay for the debt that the hospital bills left, and pay for child care for my child instead of being there to take care of my own child after the traumatic death of my husband.

“And this is not just my story. This is the story of so many people, so many people,” she continued, “and I personally think that having people have be able to count on some money coming in gives you some peace of mind.”

Citing the U.S. gross domestic product nearing $20 trillion, National Urban League president Marc Morial said: “In a great nation like ours with all of this enormity of wealth and output and economic success, how can we leave anyone unfed, ill-fed, ill-clothed or ill-housed?”

Morial, who was educated in Catholic schools – topped off with a law degree from Georgetown – added: “What we should be striving for is a society, from an economic standpoint, that provides, ensures and, yes, guarantees a certain standard of living to every citizen, every person, every child, every family, every senior.”

Cancian said that even before the 1996 welfare overhaul, signed into law by President Bill Clinton, things were hardly rosy for America’s poor.

“When they went out and got a job,” she said, “pretty much every dollar that they earned, we took away some of the support that we were providing them. And a lot of the child support that they might bring in, if the father paid child support, the mom lost some of her welfare.”

Amid a pandemic, people are hit especially hard, according to Melgarejo.

“I talked to about 450 people, just one-on-one filling out the application (for help), and just to give you an idea, people were making $4,000 or $5,000 a month working in restaurants, working taking care of kids, cleaning, janitors, whatever. All those jobs disappeared by mid-March (last year). So when I was asking them, how much did you make in April? ‘Zero.’ How much did you make in May? ‘Zero.’

“So, basically people went from being able to take care of their family working both people working, doing everything that they’re supposed to do if they’re able-bodied, to not having anything. They depleted their savings, if they had any, within two months,” she continued.

“Now it’s not only the fact that people don’t have a job,” she added, “but also it’s really hard to go find a job because our kids are at home because homes became school, and because we’re in debt, we’re at risk of losing (our) homes. So it’s not just losing your shelter, but losing the school for your kids.”

Doar also criticised the effort to increase the minimum wage to $15 an hour. “It may be too low,” he acknowledged, “but $15 is probably too high if we’re trying to help people who struggle the most.” He was rebuffed by Cancian.

Improvements for the poor will come, she said, by “making work more attractive and more manageable, so with a higher minimum wage, with sick leave, and not by holding kids hostage. It is simply unacceptable that we’re willing to let one in 10 kids go hungry to create an incentive for their parents to work. Even if we had affordable child care and family-supporting jobs available to make going to work a reasonable choice for all those parents, and we do not have that.”

Morial, who said that if the minimum wage were tied to 1968’s borrowing power, it would be $19 an hour today. He also lamented the economic toll taken on “the bottom 70%” of U.S. households over the past 40 years.

“Something’s wrong with our values when a major tax cut of $1.5 trillion can sail through and something for working families gets excessively analysed, chopped into bits and reexamined,” Morial said. “I mean, sometimes we’ve got to ask, what are our priorities?”