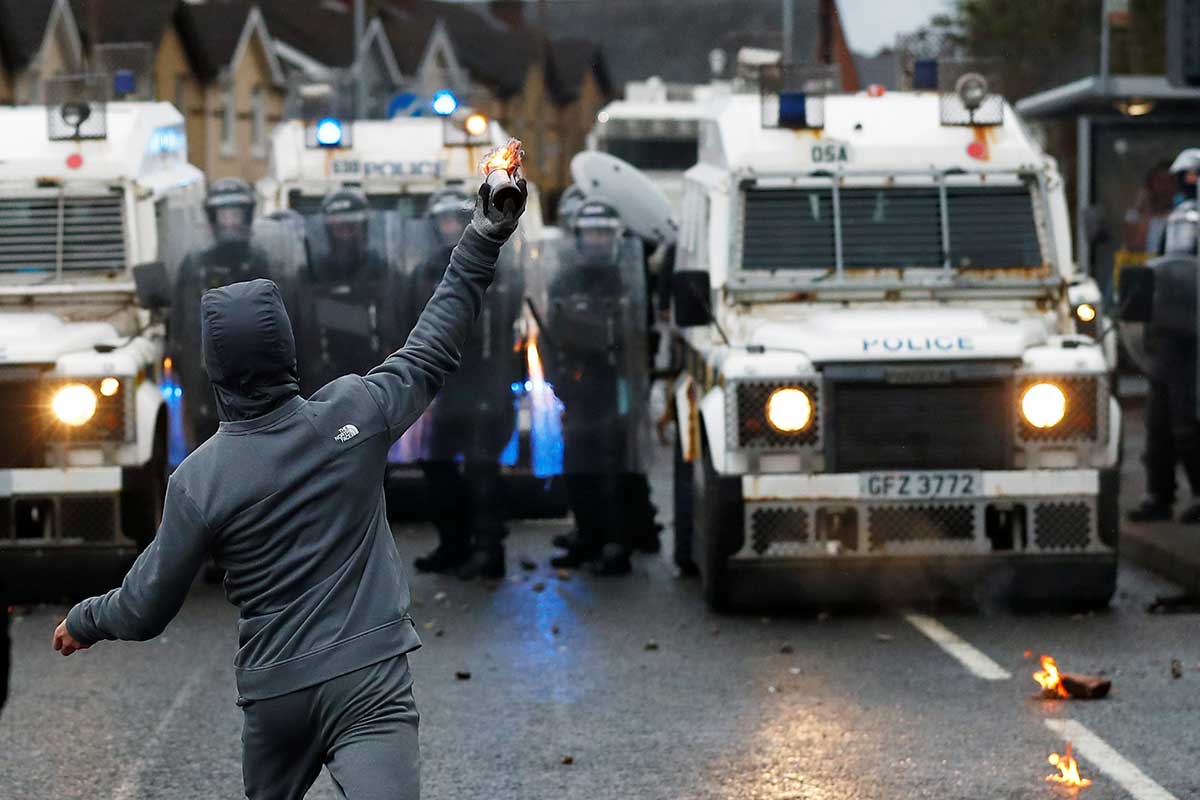 A demonstrator throws a Molotov cocktail at riot police during violent protests in Belfast, Northern Ireland, April 8, 2021. The Catholic bishop of Belfast has urged politicians to be more careful about their language as the city was engulfed in nightly violence. (CNS photo/Jason Cairnduff, Reuters)

The Catholic bishop of Belfast urged politicians to be more careful about their language as the city was engulfed in nightly violence.

Bishop Noel Treanor also appealed to young people “to stop engaging in disturbance and violent activity now” after 74 members of the police service were injured.

The city has witnessed some of the worst rioting in recent years and, for the first time on April 8, police used water cannon to disperse young Protestants angry at the decision. Gasoline bombs, fireworks and stones were used to attack police. A journalist was attacked, and a bus driver was injured when his public bus was hijacked and set on fire.

“Sadly, over the past week, we have experienced a return to civic unrest and violence on our streets,” Bishop Treanor said.

“These scenes are deeply concerning for all of us who believe in and have worked together for a shared, brighter future for our society,” he said April 9.

“I wish to express my particular concern and support for those police officers who have been injured in this violence and for their families. The police service is an integral part of our society, made up of women and men from every background and tradition, called to serve the common good and safety of our shared society.

“The police service deserves our support in its efforts to bring safety and order to our streets. I ask politicians to weigh carefully the impact of their words, to avoid the deeply damaging politicization of civic policing and to use the available mechanisms of accountability and influence to deal with any concerns that may arise,” Bishop Treanor said.

Church leaders on both sides of the sectarian divide have been on the streets pleading for rioters to stop. People as young as 13 have been arrested for disorder.

Police have said they are concerned that hardline Protestant paramilitaries may be orchestrating the violence. There are now fears that disorder may spread to Catholic areas, as much of the violence from Protestant youths has occurred near so-called “peace lines” — walls erected to prevent clashes between the communities.

“I know you don’t want to hurt anyone or kill anyone, so don’t get caught up in this violence.

“Beware of being manipulated and controlled by others who urge you on to violence while they themselves stay in the background so that they don’t get caught,” Bishop Treanor said.

The unrest comes almost 23 years to the day – April 10 – when a peace accord known as the Good Friday Agreement was signed, bringing an end to 30 years of sectarian killing by paramilitaries. The deal bound all parties to use exclusively peaceful means and provided a pathway for a referendum on whether Northern Ireland should remain part of Britain.

Appealing directly to politicians, Bishop Treanor said: “In this year 2021, there is a choice to be made for our future as a society. For 20 years we have shown that we have the will to make positive choices. Where political leaders harness that will with creative, imaginative and responsible leadership, there is a way. That way involves reaching out in solidarity to build trust and also to challenge those who seek to control and imprison us and our young people in the past.”

Violence Against Women Needs Attention 365 Days Of Every Year