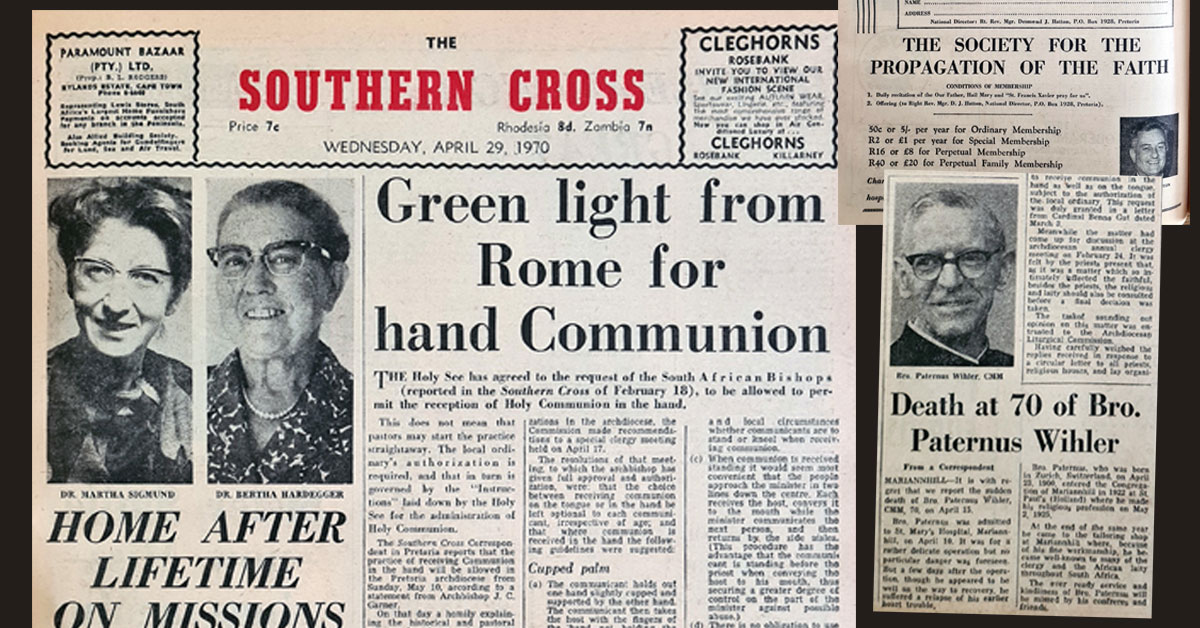 Communion may be in hand

The Vatican has approved a request from the Southern African Catholic Bishops’ Conference to permit reception of Holy Communion in the hand. The practice will be permitted only with the permission of the local bishop. The archdiocese of Pretoria will allow Communion in the hand as of Sunday, May 10, according to a statement by Archbishop James Garner. Communion in the hand was the common form of reception until the 9th century, when Communion on the tongue was first introduced in France, from where it spread to other regions.

Catholic and Lutheran clergymen who were imprisoned in Dachau concentration camp during World War II will hold a memorial service on May 20 to commemorate the 25th anniversary of their liberation. A total of 2,720 clergy of all denominations were held at Dachau, of whom 2,579 were Catholic priests and religious. Of those imprisoned, 1,034 died.

Seven years after having a global hit with “Dominique”, Jeanine Decker — widely known in 1963 as Soeur Sourire (Sister Smile) or the Singing Nun — has made a new record. The 35-year-old former nun intends to supplement a catechetical programme aimed at primary-school children.

The hippies are coming

In his editorial, Fr Louis Stubbs says that, despite the public contempt for “drop-outs”, they recall the rejection of St Benedict of his society in the 5th century. Unlike the saint, they are not motivated by adoring God, but “hippies could have some important part to play in jigging Christians back to reality in their protest against inconsistency” between what Christians do and what their faith teaches.