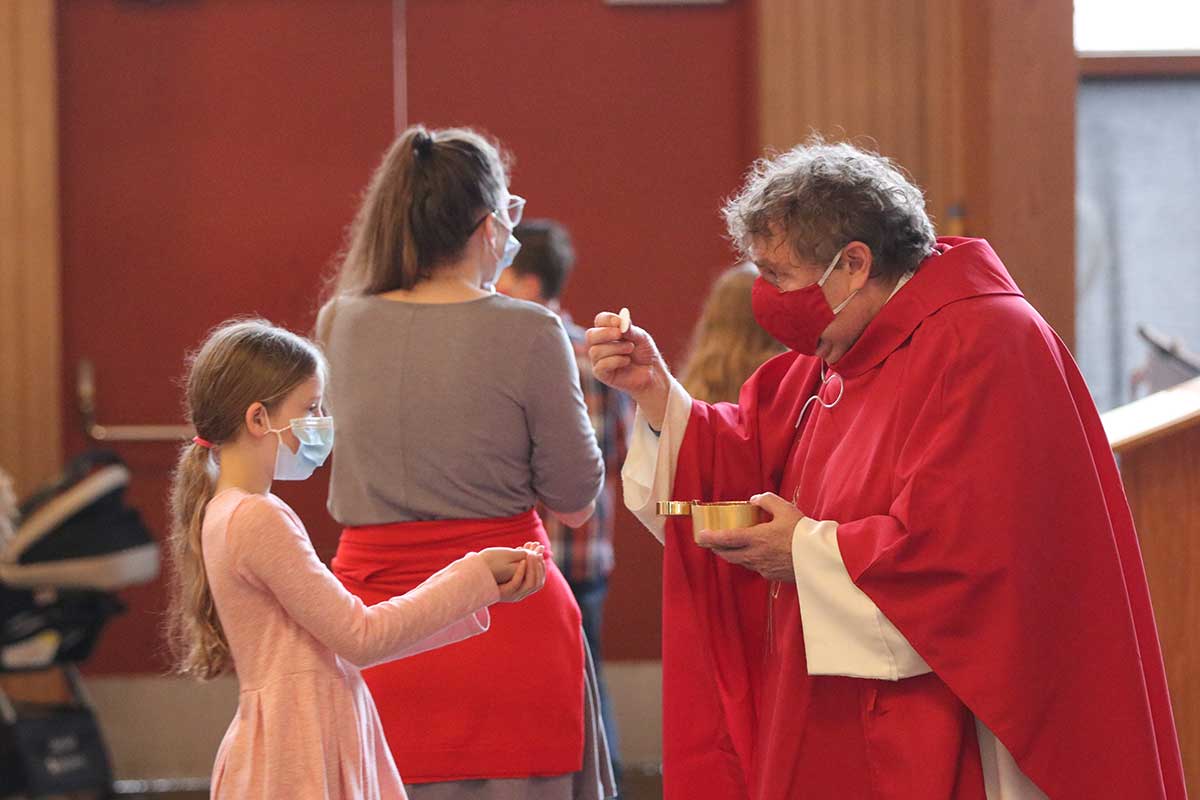 By Ed Langlois – It took courage for Leilani Arellano to return to Mass, but she is glad to be back.

Over the summer, Arellano had COVID-19 and she still cannot breathe quite right. The prospect of worshipping in a room full of people, even properly distanced and masked, made her uneasy.

But Father John Henderson and the rest of the staff at St. Anthony Parish in Tigard, remained so consistent and open-hearted in their outreach during the pandemic and so fastidious and firm on the rules for returning to Mass that Arellano felt both wanted and safe.

During each Mass at St. Anthony, in a suburb outside of Portland and one of the largest parishes in the state, Father Henderson and other priests thoroughly explain safety procedures and the safest technique for receiving Communion.

“It was hard for me to come into Mass,” Arellano said. “But they have done a really good job for those who are panicked and scared as I was. It feels good to be in person, honestly. It feels a lot more grace-filled than sitting in front of a computer.”

Father Henderson opted to accept the pandemic as an opportunity for conversion. He started with himself, asking how he could grow closer to the Lord during a time of fear and isolation. Then he prayed about the entire 3,600-family parish and its three big language groups: English, Spanish and Vietnamese.

“I feel we have to come out of this with a kind of newness, a freshness,” he said. “It’s not just about sitting back and saying, ‘Where is everybody?’ My goal is to really evangelise, to really bring the Lord to people.”

To bring the whole parish together and build new zeal for worship, he changed the Mass schedule so that different language communities brush against each other more. A Sunday evening Mass will include multiple languages. He is working to build intercultural relationships that foster both prayer and discipleship.

“Coming back to church is not just a day but it’s a longer path,” he told the Catholic Sentinel, archdiocesan newspaper of Portland.

While parishioners were quarantined, he began to think of the year-round homebound and their needs. Livestreamed liturgy will continue with a permanent multi-camera system.

But Father Henderson makes it clear that the healthy ought to attend Mass in person as soon as they can.

“We Catholics have the power of the Eucharist,” he said. “We need the body and blood of Christ to give us that strength and nourishment. It’s not just about being entertained or watching some television show. It’s about your involvement, your engagement, your connecting. Eucharist is a community effort.”

Father Henderson explained that nothing like Mass in person can reveal the reality that parishioners need each other and must serve one another and the wider community. The parish recently hired a coordinator of social justice and early in the pandemic, it offered rent assistance to parishioners in $500 increments.

St. Anthony will retain the Zoom option to make faith formation sessions more accessible, especially to those who work all day and would struggle to get to the parish for an evening class. Father Henderson calls Zoom “a new tool to help people come to know the Lord.”

Parishioners appreciate the innovation and say it increases the sense of belonging.

“There’s been a lot of staying in touch, a lot of programs that were presented online, and I found that really wonderful,” said parishioner Losia Radominski. “There were a lot of Zoom series with films and then with discussions. In fact, I grew closer to some people because of the discussions we had.”

For her part, Radominski is working on a few friends who say they are getting accustomed to the convenience of viewing liturgy from home. “I told them, ‘You know, you do have to go out to people. That is part of our Christianity.'”

Father Scott Baier, parochial vicar, serves the large Hispanic community, said the pandemic has “underscored for us that when we are isolated and we don’t have communication with one another, we really suffer.”

He thinks some parishioners may not return to Mass because they are accustomed to doing other things on Sundays.

He was the celebrant at a funeral Mass recently where 60 or 70 people could attend safely. The liturgy showed him the power of in-person worship. “I could just tell after the Mass that they had connected with God,” he said. “All of their anxiety was kind of gone.”

Miriam Marston, director of faith formation at the parish, said a practical key to keeping parishioners engaged during the pandemic has been fostering small faith communities that can meet and pray online.

“Home” is Marston’s theme as she helps parishioners return to full-time and in-person participation. She asks children to call to mind the tabernacle in church with its candle always aglow. That light, they know, is a sign that Jesus is present.

Fourth Sunday of the Year Reflection