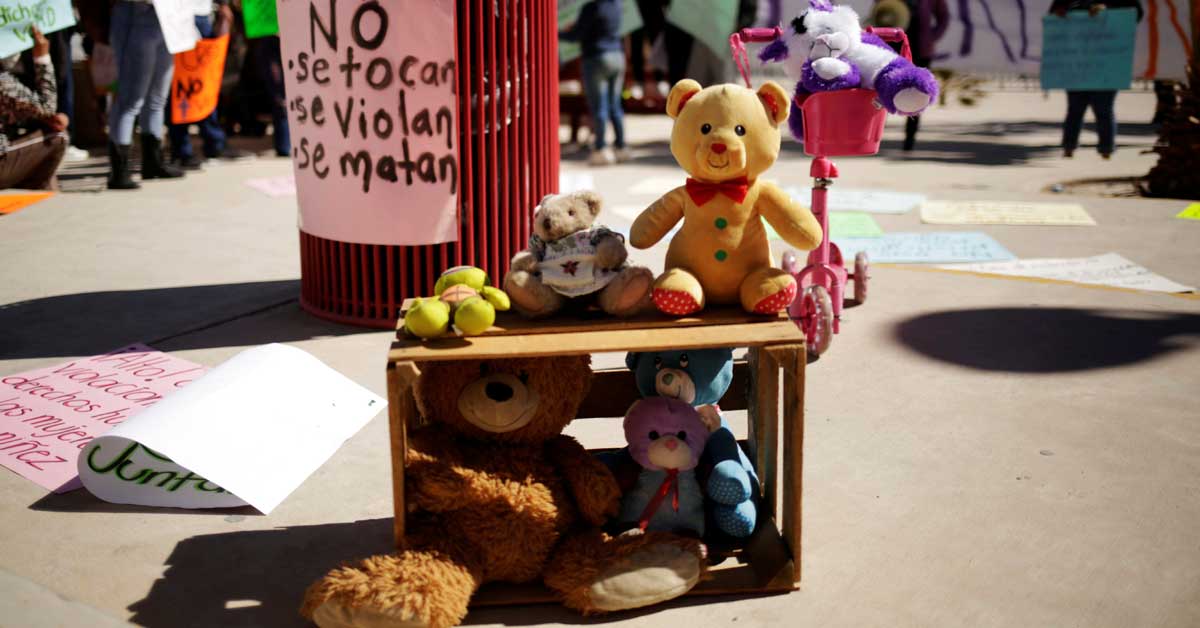 Children’s toys are seen during a protest to demand justice against a Catholic priest accused of sexually abusing a minor, outside the courts in Ciudad Juarez, Mexico. The Pontifical Gregorian University in Rome is offering a new diploma that will help canon lawyers working in abuse investigations and trials for the church. (CNS photo/Jose Luis Gonzalez, Reuters)

By Carol Glatz – When Pope Francis abolished the “pontifical secret” covering the church’s judicial handling of cases of the sexual abuse of minors, it was hailed as a major step forward in promoting greater transparency and accountability.

At first glance, it means victims and witnesses are free to discuss a case and, even though Vatican officials are still obliged to maintain confidentiality, it “shall not prevent the fulfilment of the obligations laid down in all places by civil laws,” the amended law said.

But an additional consequence of this landmark change, enacted in mid-December 2019, will be its potential to provide much-needed practical training and multidisciplinary studies for those involved in the handling of abuse cases.

The faculty of canon law at Rome’s Pontifical Gregorian University recently announced it is offering a new diploma in penal jurisprudence – an “innovative” yearlong course designed to give canon law graduates practical skills and guidance in handling evidence, appropriately questioning the different parties and gleaning insight from actual past abuse cases, according to a university news release in mid-March.

“There is a need to learn canon law not only in the theoretical dimension, but also in its applications,” Jesuit Father Damián Astigueta, a canon law professor at the university and coordinator of the diploma, said in the news release.

The release said people working in abuse investigations and trials for the church can struggle with questions, such as: What “clues” will help understand what the “reality” is when sorting through documents, emails, photographs and other evidence? How are facts to be reconstructed? How should presumed victims and the accused be questioned? And when is there the moral certainty of guilt or not?

Father Astigueta told Catholic News Service that “the problem has been that many who work on church trials do not have enough experience” in some legal proceedings, and those who do are more familiar with working on marriage cases than with criminal proceedings for abuse cases.

The course, which will be in Italian and runs from October 2021 to May 2022 at the Gregorian campus in Rome, is meant for anyone working in church tribunals or with a bishop in a diocese, because it will cover not just criminal procedures, but also disciplinary proceedings and sanctions that are imposed without a trial, but that still require an in-depth understanding of people’s rights, church norms and what constitutes a fair process, he said.

The course also will cover what to do with accusations and cases of economic or financial crimes and abuse, such as cases of unfair wages for employees, the mismanagement of church funds or the illicit sale of church assets, Father Astigueta said.

But one thing that makes the course unique and unprecedented will be students’ access to documentation from past abuse cases, so they can gain insight from real-life examples and legal precedents that had been inaccessible due to the “pontifical secret.”

However, the “secret of office” and strict confidentiality continue to be tied to these cases, which is why the course will not be offered online, and students will need to sign a confidentiality agreement, he said.

The lifting of the pontifical secret only applies to cases involving the abuse of a minor, leaving other cases still inaccessible, Father Astigueta added. But it still opens a whole new way of learning and skills-building for a field that is complex and lacks what would be called “a body of jurisprudence” – that is, access to reasons for and analysis of decisions from prior cases, including facts and events related to a case, what relevant laws and norms were referred to and how were they interpreted.

Father Astigueta, who has collaborated with the doctrinal congregation, including as a judge in ad hoc tribunals, said often he had proposed that officials of the Congregation for the Doctrine of the Faith meet regularly with canon law professors teaching at Rome’s pontifical universities to discreetly discuss certain abuse cases “because this clearly would help our teaching” and, in turn, help students benefit from the congregation’s experience.

“But it could not be done and now, with this proposal (of a course), it is a way to create a forum with students and professors to discuss cases,” he said. “When a place like this is created for discussion, everyone learns, both the professors and students, because there is always someone who sees something the others don’t or asks a question that makes you think and this is a huge help.”

The course also will include input from the university’s Centre for Child Protection “in order to see the tragedy of the abuse of minors from the psychological point of view,” he said.

This way, students will “not simply be people who apply the law, but who know how to understand what is the underlying problem of a case” of abuse, he said. They will also learn how to understand “what kind of abuser we may find” and how to adequately and appropriately question and listen to the accused and presumed victims in a way that gets needed facts without triggering or re-victimising them, he said.

People working in canon law usually don’t have this kind of experience when it comes to canonical crimes, he said, resulting in poorly worded questions and not following up on what a person says.

A precise and professional line of questioning also helps in “trying to unmask a lie,” he added.

“There are many, many cases, the majority I would say, that are true (accounts of abuse), but, unfortunately, right now we are seeing an increase in which there are many false accusations,” he said, or sometimes the accused is found guilty without sufficient proof.

But the scenario that hurts the most, the priest said, are those cases in which the accused is truly guilty, but it could not be sufficiently proven.

“This is serious because everybody loses – the community, the offender, the victim, everyone – because the process was handled poorly,” he said.

The new course is meant to ensure the process “is carried out better in every way possible,” Father Astigueta said, and to serve the whole church because “with due process, everyone wins.”