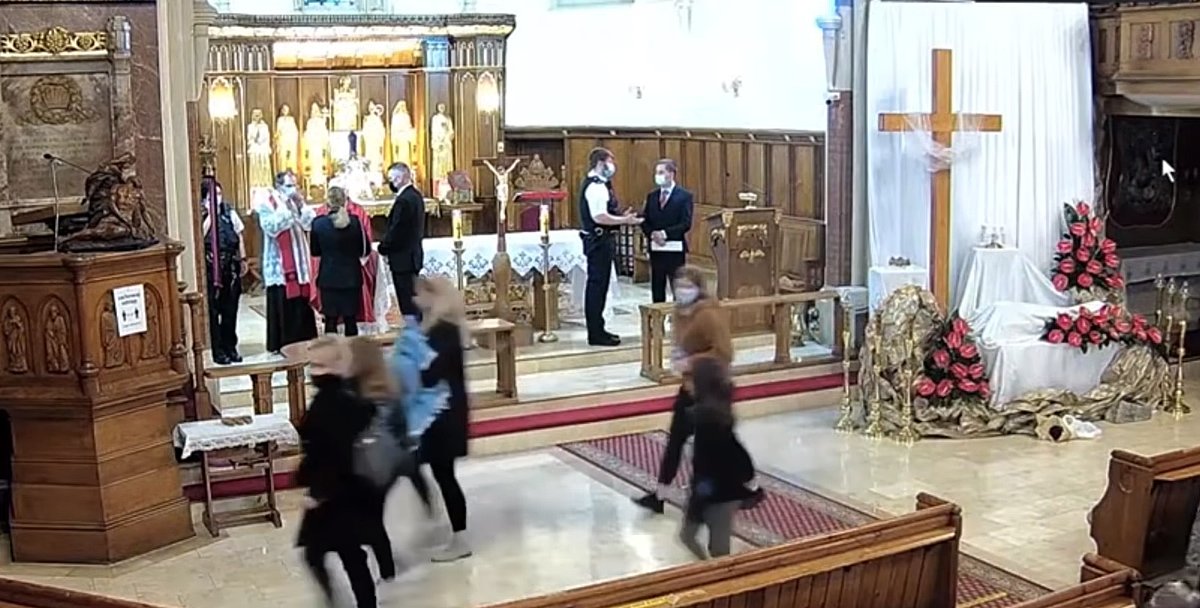 Police in London stand on the altar at Christ the King Polish church and halted a Good Friday service after a complaint that pandemic regulations were not being met. The parish claims police “brutally exceeded their powers.” (CNS screenshot/YouTube)

Police halted a Good Friday service after a complaint that pandemic regulations were not being met, leading the parish priest to complain that officers had “brutally exceeded their powers.”

Footage from a video of the April 2 service at Christ the King Polish church in the southern suburb of Balham shows two uniformed officers entering the sanctuary and telling more than 130 worshippers that the gathering was “unlawful” and threatening them with fines and arrest if they did not go home.

“Under the coronavirus regulations, you are not allowed to meet inside with this many people under law,” a police officer said.

“At this moment in time you need to go home,” the officer said. “Failure to comply with this direction to leave and go to your home address ultimately could lead you to being fined 200 pounds ($278) or, if you fail to give your details, to your being arrested … leave the building now.”

The police interrupted the early evening service during the Adoration of the Cross and ended it 30 minutes before it was due to finish.

An April 3 statement posted on the website of the church said the faithful obeyed the order from the police “without objection.”

“We believe, however, that the police brutally exceeded their powers by issuing the warrant for no good reason, as all government requirements were met,” the statement said.

“We believe municipal police officials have been misinformed about the current place of worship guidelines,” it said.

“We have informed the Polish Catholic Mission in England and Wales about this incident,” the statement added. “We asked the Metropolitan Police authorities to explain the reasons for the incident, and we are waiting for their response.”

Under government regulations, there is no limit on number of people permitted to assemble for public worship as long as they observe sanitary precautions and the place of worship has been subjected to a rigorous risk assessment. Families or people organised into “social bubbles” do not have to be socially distanced from each other, and the wearing of masks is not mandatory for children under age 11 or for people exempt for health reasons.

Places at the service were booked online in advance to ensure that numbers were limited and safety requirements were met.

In a statement, police said they were “called to a report of crowds of people” lining up outside the church.

“Officers attended and found a large number of people inside the church. Some people were not wearing masks, and those present were clearly not socially distanced,” the statement said.

“We are particularly concerned about the risk of transmission of the COVID-19 virus as a result of large indoor gatherings at which people are not socially distanced and some are not wearing masks,” it said. “As such, officers made the decision that it was not safe for that particular service to continue.”

The police returned to the church when Mass was celebrated on Easter, according to reports in the British media, but this time declined to enter.

A statement posted on the Facebook page of the archdiocese confirmed that Archbishop Wilson discussed the actions of the police with the rector of the Catholic Polish Mission, Msgr. Stefan Wylezek, “who intends to contact the Metropolitan Police authorities about how the situation was handled.”