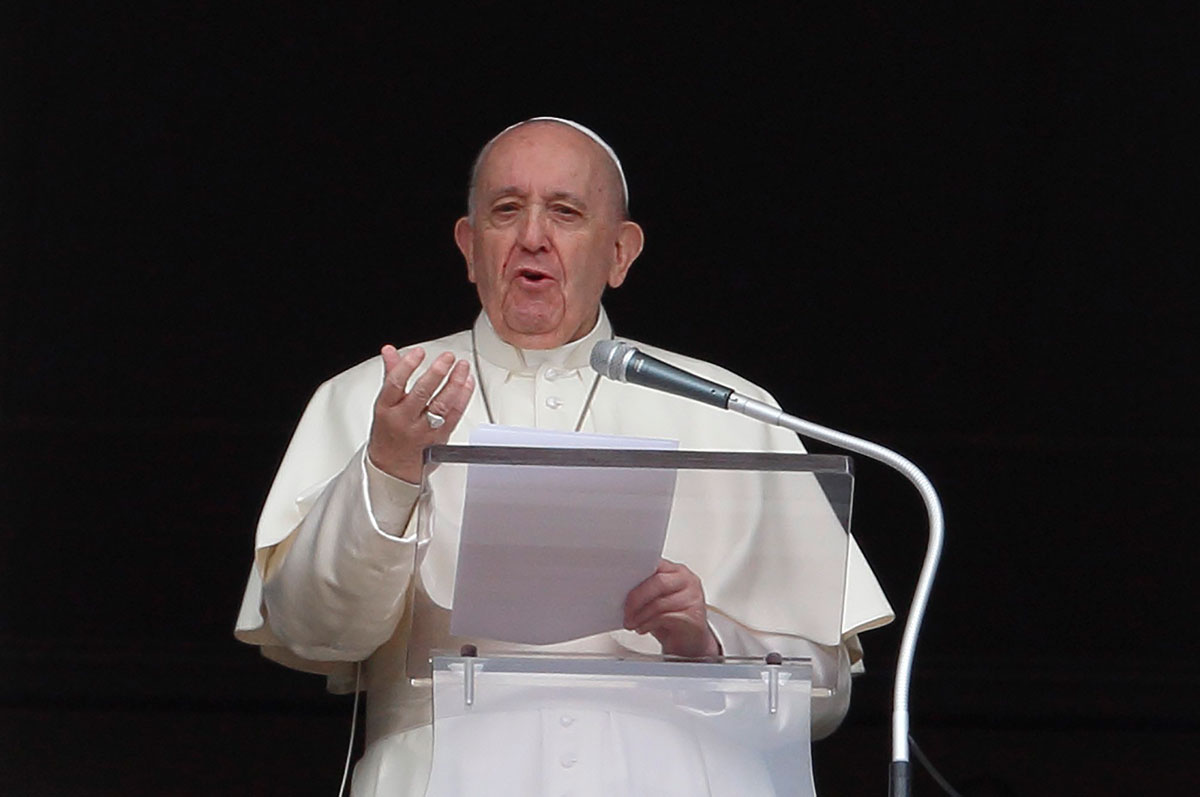 Pope Francis greets the crowd as he leads the “Regina Coeli” from the window of his studio overlooking St. Peter’s Square at the Vatican on April 18, 2021. (CNS photo/Paul Haring)

In his Regina Coeli address Pope Francis applauded the beatification of six Cistercian monks who were martyred while trying to protect the Eucharist from desecration by French soldiers in 1799.

Blessed Siméon Cardon and five other Cistercian monks were beatified in the Italian abbey where they were martyred more than 200 years ago.

Speaking from the window of the Vatican’s Apostolic Palace for the first time in weeks, Pope Francis asked the pilgrims gathered in St Peter’s Square on April 18 to applaud “the new Blesseds”.

“In 1799, when French soldiers, in retreat from Naples, sacked churches and monasteries, these meek disciples of Christ resisted with heroic courage, unto death, to defend the Eucharist from desecration,” the pope said.

“May their example spur us to a greater commitment of fidelity to God, capable of transforming society and making it more just and fraternal.”

Cardinal Marcello Semeraro, prefect of the Congregation for the Causes of Saints, presided over the beatification of the six Cistercian monks in Casamari Abbey in Frosinone, Italy.

Four of the martyred monks – Siméon Cardon, Modeste-Marie Burgen, Maturin Pitré and Albertin Marie Maisonade – were French and had previously fled the violence of the French Revolution.

The French army, which had occupied Naples, had sacked the Benedictine monastery of Monte Cassino and other churches and monasteries while on retreat northward.

While most of the Cistercians of Casamari Abbey escaped amid chaos of the looting, six monks remained to try to save the consecrated hosts in the tabernacle from desecration and were killed by the soldiers.

In the pope’s Regina Coeli address, he said that “the Eucharistic banquet” is the focal point of Christian community.

“Eating together the Body of Christ: this is the core of Christian life,” Pope Francis said.

“Being Christian is not first of all a doctrine or a moral ideal; it is a living relationship with Him, with the Risen Lord: we look at him, we touch him, we are nourished by Him and, transformed by his Love, we look at, touch and nourish others as brothers and sisters,” he said.

The pope also asked for people to pray for peace in eastern Ukraine, where tensions have risen due to the build-up of Russian troops along the border.

“On this Third Sunday of Easter, we return to Jerusalem, in the Cenacle, as guided by the two disciples of Emmaus, who had listened with great emotion to Jesus’ words along the way and then had recognised him ‘in the breaking of the bread’. Now, in the Cenacle, the Risen Christ presents himself in the midst of the group of disciples and greets: ‘Peace to you,’” he said.

“Brothers and sisters, this Gospel passage tells us that Jesus is not a ‘ghost,’ but a living Person; that when Jesus draws near to us he fills us with joy, to the point of disbelief, and he leaves us bewildered, with that astonishment that only God’s presence gives, because Jesus is a living Person,” Pope Francis said.