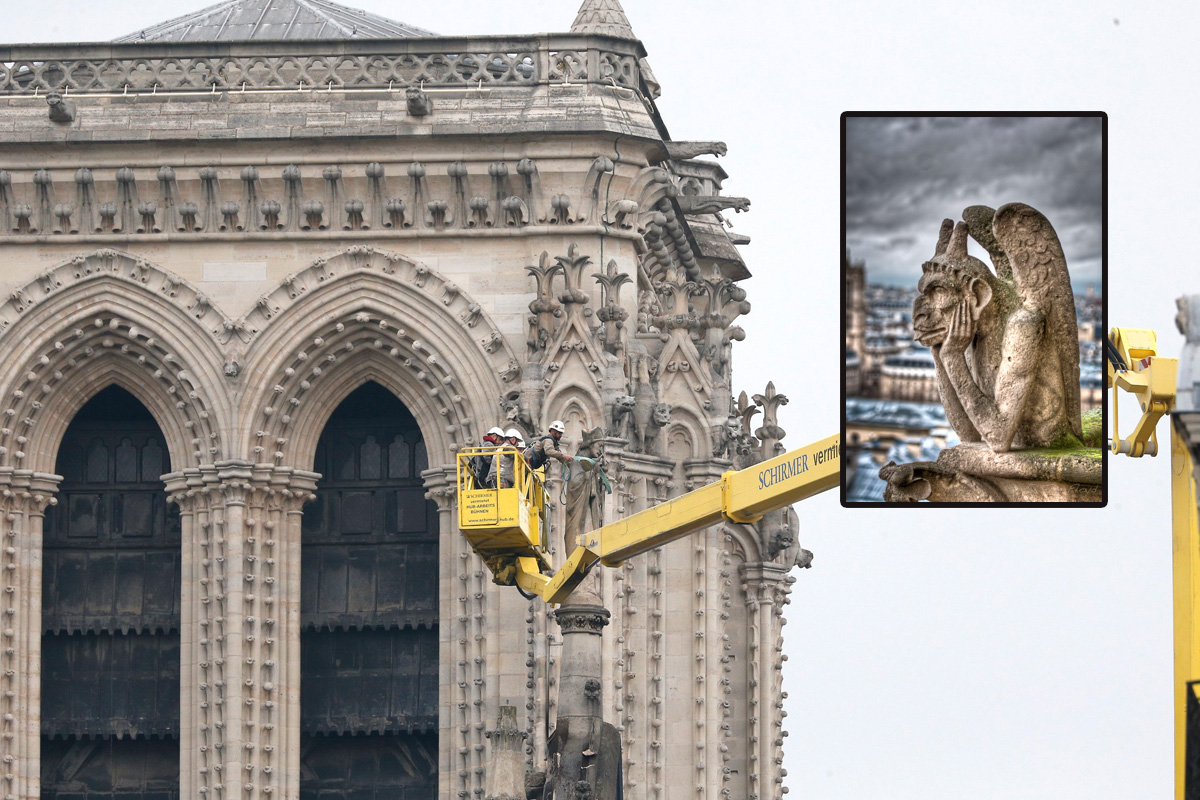 Firefighters secure a statue with a strap outside Notre Dame Cathedral on April 16, 2019, a day after a fire destroyed much of the church’s wooden structure. Two years after the fire, a fundraising group is urging people to sponsor a statue or gargoyle to help with reconstruction. (CNS photo/Paul Haring)

By Deirdre C Mays – A novel fundraising approach to restore one of the most iconic monuments in the world, Notre Dame Cathedral in Paris, enables donors to have a piece of history.

On April 15, Friends of Notre-Dame de Paris unveiled an interactive website – restorenotredame.org – that allows people to donate by adopting or sponsoring pieces of precious art and artifacts that were damaged in a 2019 fire. Donors can engage with the objects of their choosing and select which they’d like to help restore, whether it is a painting or statue. Funds can also go toward the cathedral’s restoration as a whole if the person prefers.

The organisation was established in 2017 to help cover the cost of repairing damages caused by time, pollution and the use of inferior stone used in construction of the 12th-century Gothic landmark. The cathedral had not had any major repairs since the mid-1800s, so the group launched an international campaign to raise the $135 million needed for those essential renovations – augmented by a $45 million budget from the French government.

On April 15, 2019, a fire broke out in the attic and completely consumed the timber roof and spire. The burning debris and melted lead from the roof fell on top of a stone vault below. Most sections of the cathedral remained intact due to the rib vaulting, and most of the precious art and religious relics were saved, including what is believed to be Jesus’ crown of thorns and a piece of the cross from his crucifixion, the Tunic of St. Louis and the 14th-century Virgin of the Pillar statue.

Picaud said the item people feel most sentimental about is probably the Virgin of the Pillar, which “attracts the attention of believers because it is the Virgin Mary in all her beauty and significance.”

The May paintings are one of the top features of the restoration effort. They are a series of paintings commissioned in the 17th- and early 18th-century by the goldsmith’s guild of Paris to offer to the cathedral in the month of May. They are approximately three by four meters high and depict scenes from the Gospels. Smaller models of the paintings also were created. The fundraising process has helped reveal the location of some of those that were not in the cathedral collection.

“I was called by an American family that owned the model of the Crucifixion of St. Peter. The family told me they were on the brink of auctioning the painting but they gave it to Notre Dame when they discovered what it was. This is an example of the love for Notre Dame by the American people,” Picaud said.

The massive project is currently in the safety phase, which should last until the summer of 2022, Picaud said. It includes protecting the vaults from rain with a tarp; lead decontamination; fortifying the north, south and west gables, particularly to protect the three large rose windows; fortifying the most damaged pillars of the nave; reinforcing the flying buttresses; wrapping and protecting the gargoyles and other sculptural elements of the north and south towers; removing burned and melted scaffolding that had previously surrounded the spire.

Notre-Dame Cathedral is a UNESCO World Heritage site and is one of the most recognisable and beloved monuments in the world. More than 12 million people visited every year before the fire. As a result, the outpouring of support has been at a global level and from people of all belief systems – from the envelope Picaud received that contained a $10 bill from a woman in the U.S. Midwest to St. Patrick’s Cathedral in New York launching its own fundraising effort.

Even while the fire was burning, Picaud was being interviewed by media and he met a Moroccan-born man who was a Muslim. The man described Notre Dame as “our” cathedral.

“I think this is the beauty of Notre Dame and the church of the Virgin Mary,” Picaud said.

He emphasised that the United States has been the source of some of the largest donors. The Friends of Notre-Dame received two donations totalling $10 million from two American foundations, he said.

The French government has set a target date to reopen the cathedral to the public in April 2024, but Picaud said there is no way of knowing the exact time this will happen.

In the future, the cathedral will have a strong security team in place and new measures to protect against fires, such as sprinklers, that it did not have before, Picaud said.

Restoration and rebuilding probably will continue for the next 10 years, Picaud said, and will cost more than $1 billion to complete it.

Rivonia Has a New Church!

Priests’ Dogs are More than Just a Parish Mascot: They’re Good for the Soul