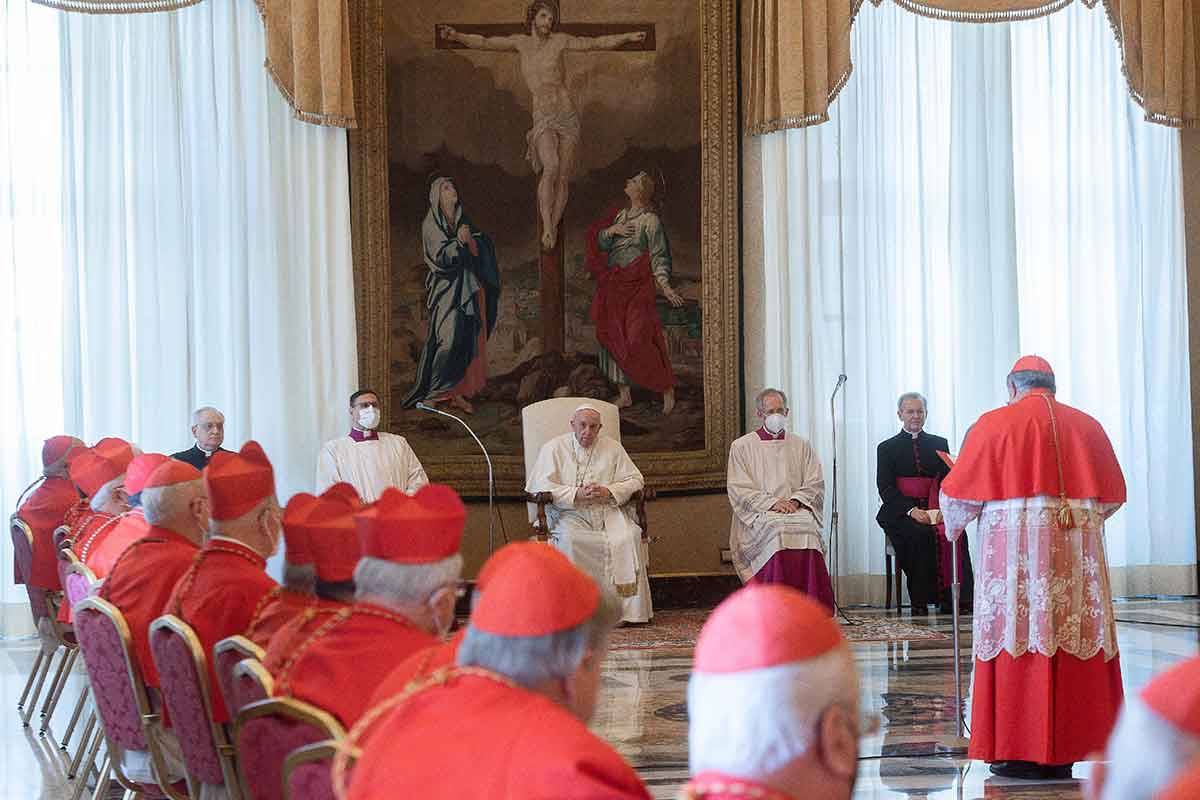 Pope Francis listens as Cardinal Marcello Semeraro, prefect of the Congregation for Saints’ Causes, speaks during an “ordinary public consistory” for the approval of the canonization of seven new saints, at the Vatican May 3, 2021. (CNS photo/Vatican Media)

By Cindy Wooden – The Catholic Church’s proclamation of new saints demonstrates that it is possible for men and women to live holy lives and that God is present and at work in the world, said the prefect of the Congregation for Saints’ Causes.

“It’s useful on earth, not for heaven,” said Cardinal Marcello Semeraro, the prefect, when asked, “What is the use of proclaiming saints?”

In an interview published May 4 in L’Osservatore Romano, the Vatican newspaper, the cardinal noted how the Second Vatican Council spoke of the “universal vocation of holiness.”

“To proclaim saints helps convince us that this vocation really exists, that the Gospel works, that Jesus does not disappoint and that we can trust in his word,” Cardinal Semeraro said in the interview the day after Pope Francis and cardinals resident in Rome held a consistory to approve the canonisation of seven men and women.

The causes took years, even decades of work: studying the lives and writings of the candidates, verifying the events surrounding the deaths of those who were martyrs and looking at cures submitted as miracles attributed to the candidates’ intercession.

But, the cardinal said, “our work of discernment in the causes of saints is not done primarily with the head or with feelings, but on our knees, praying and asking for the light of the Spirit.”

“The saints don’t need our recognition,” he said. “But when we appreciate them as such, we recognise the presence of God among us and what can be more beautiful and comforting for a Christian than to feel the warmth of the closeness of the Lord?”

Asked about the difference between saints and any person who acts heroically to help another, Cardinal Semeraro said, “God is love and every expression of authentic charity has his fingerprints. But there are differences. While the heroes of this world show what a person can do, the saint shows what God can do.”

“Canonizing one of its sons or daughters, the church is not exalting a human work but is celebrating Christ alive in him or her,” the cardinal said. “Christian heroism proclaims God and spreads in the world his grace and blessing, which we cannot do without.”

Faith Leaders: Light A Candle at Noon Every Wednesday for Covid-19