Let’s Move From From Babel to Pentecost 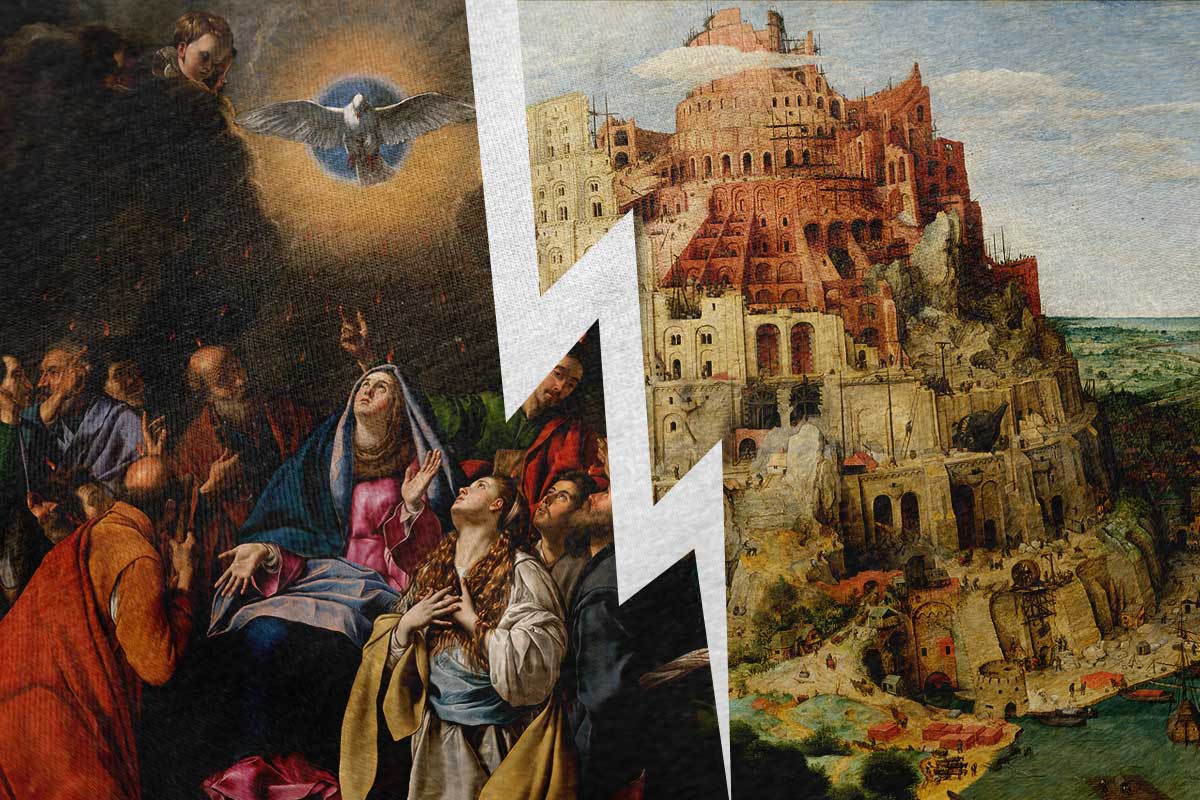 By Cindy Wooden – In official Catholic teaching and in the challenges of everyday life, both interreligious dialogue and proclamation of the Gospel require more than words.

The two Vatican offices, marking the 30th anniversary of the document May 19, hosted a webinar that looked at the document’s history and its continuing implementation, but also at the ongoing challenges of meaningful and respectful dialogue in situations of conflict and where “identity” and nationalism are obsessions – leading to what one participant described as “Babel vs. Pentecost.”

In the Genesis story of the Tower of Babel, God frustrates people’s attempts to build a city and tower reaching the heavens by confusing their languages so they could not understand what the other was saying. But at Pentecost, the large crowd of people from different nations heard in their own languages the proclamation of “the mighty works of God.”

Msgr. François Bousquet, a French professor of theology and expert in interreligious dialogue, insisted at the webinar that “an exchange of information is not the same thing as dialogue where you allow yourself to be touched by the other.”

In many ways a precursor to Pope Francis’ encyclical, “Fratelli Tutti, on Fraternity and Social Friendship,” the 30-year-old document insisted that the church engages in dialogue with other religions because their members are part of the human family created by God and “called to a common destiny, the fullness of life in God.”

The respect with which other religions are treated and attempts at greater understanding are inspired by an acknowledgement of “the presence of positive values not only in the religious life of individual believers” but in the religious traditions themselves, it said.

Christians must model their proclamations on Jesus’ own, the document said, noting that he revealed himself “only gradually with infinite care.”

“Jesus is not just the content of the proclamation” of the Good News by Christians, “we should also follow him in the way he conducted his preaching of the reign of God, and that is very dialogical,” Cardinal Luis Antonio Tagle, prefect of the Congregation for the Evangelisation of Peoples, told the webinar.

“In dialogue, we make the person of Jesus present, we imitate him, and we make the Gospel really attractive rather than imposing it,” the cardinal said. “We are respectful, but we allow the beauty of Jesus to emanate from us in his compassion, in his empathy and in his dialogue.”

Cardinal Tagle said, “I hope that we can continue dialoguing and proclaiming Jesus during this pandemic in the spaces of common suffering, common tears, in refugee camps, in hospitals, on roads with dead people, roads with homeless people, that in our dialogue of life they may see Jesus who is close to them, who is alive and who is our hope.”

Cardinal Miguel Ángel Ayuso, president of the Pontifical Council for Interreligious Dialogue, said the official dialogues in which the Catholic Church is involved must flow from and build on the dialogue normal Catholics are involved in on a grassroots level, because “it is there that we can see the importance of promoting this spirit of friendship.”

“We have to be ready to know each other” and overcome the temptation or even habit of ignoring people from other religious traditions, even if they live next door, he said.

In many cases, Cardinal Ayuso said, dialogue and proclamation occur “not by sitting across from each other, but by standing shoulder to shoulder,” looking at the reality in one’s community or country “and trying to see together how we can heal our wounded world.”

Speaking from the Middle East, “one of the most wounded and divided regions” of the world, Archbishop Pierbattista Pizzaballa, Latin Patriarch of Jerusalem, insisted dialogue and proclamation must have a “prophetic vision,” which includes and builds upon forgiveness.

“Religion, rightly or wrongly, is part of the problem, is considered the main channel of all this conflict,” he said. “It is a manipulation of religion, of course,” but is seen as a determining factor in the identity of the people who are fighting as well as those caught in the crossfire.

Dialogue and ultimately peace in the Middle East will not be possible without “rethinking the categories of history, memory, guilt, justice and forgiveness,” Archbishop Pizzaballa said. “Most of the conflicts in the Middle East are related to our respective different narratives for reading our history where we are at the centre, at the centre is our pain and the other is the cause of my pain. We have to rethink this.”

The task of the Christian churches in the Holy Land, he said, is to learn “to talk about forgiveness in this deeply wounded society. How to turn the page, to look forward and not remain stuck in our respective different readings of history where our wounds are always at the centre of our attention.”

“We cannot talk about interreligious dialogue from a theological point of view and not enter into the deep wounds, the deeply painful wounds” that are at work throughout the Middle East, the patriarch said. “We cannot have dialogue without talking about our common responsibility for justice and peace.”

Divorced from the reality of the suffering and tension, he said, “dialogue is just talk.”