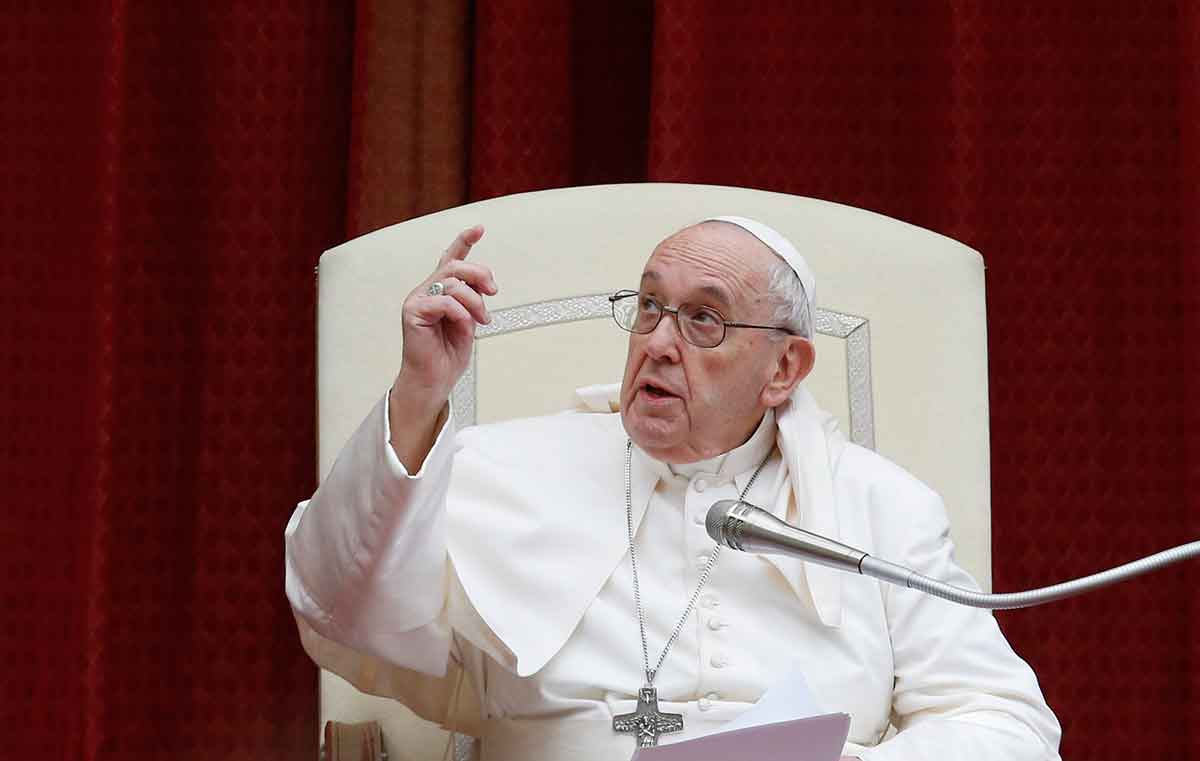 Pope Francis gestures as he leads his general audience in in the San Damaso Courtyard of the Apostolic Palace at the Vatican May 19, 2021. (CNS photo/Paul Haring)

By Junno Arocho Esteves – Those who overcome distractions or obstacles when praying learn the value of perseverance in times of trial, Pope Francis said.

“True progress in spiritual life does not consist in multiplying ecstasies, but in being able to persevere in difficult times,” the pope said May 19 during his weekly general audience.

“Walk, walk, walk on and if you are tired, stop a little and then start walking again; but with perseverance,” he said.

Arriving by car to the San Damaso Courtyard of the Apostolic Palace, the pope was given a warm welcome by those in attendance, including a group of pilgrims from Mexico.

“Francisco, hermano, ya eres Mexicano” (“Francis, brother, you are already Mexican”), the pilgrims cried out as he made his way to his seat.

While the pope greeted the pilgrims from a safe distance, many ignored social distancing rules and crowded near the barricades in the hopes of seeing the pope up close.

In his main audience talk, the pope reflected on the difficulties that people may face when trying to pray, including “distractions, aridity and sloth” as well as the importance of recognising and overcoming them.

Both in prayer and in everyday life, he said, the mind often “wanders all over the place” and some find it “hard to dwell for long on a single thought.”

“Distractions are not a fault, but they must be fought,” he said. “In the heritage of our faith, there is a virtue that is often forgotten, but which is very present in the Gospel. It is called ‘vigilance.'”

Citing the Catechism of the Catholic Church, the pope said aridity occurs when one’s heart “is separated from God” and leaves him or her “with no taste for thoughts, memories and feelings, even spiritual ones.”

While the reasons for that sense of aridity may range from physical ailments to inner turmoil, the pope said that often, “we do not really know the reason.”

“Spiritual teachers describe the experience of faith as a continuous alternation of times of consolation and desolation; there are times when everything is easy, while others are marked by great heaviness,” he explained.

While life is often filled with “grey days,” the pope said the danger lies in “having a grey heart; when this ‘feeling down’ reaches the heart and sickens it.”

“This is terrible: one cannot pray, one cannot feel consolation with a grey heart! Or one cannot emerge from spiritual aridity with a grey heart,” he said. “The heart must be open and luminous, so that the light of the Lord can enter. And if it does not enter, wait for it, with hope. But do not close it up in greyness.”

Lastly, the pope warned that sloth is not only one of the seven deadly sins, but also “a real temptation against prayer and, more generally, against Christian life” that can “lead to the death of the soul.”

Pope Francis said that at some point in their lives, “all the saints have passed through this ‘dark valley'” and would often recount “evenings of listless prayer, lived without enthusiasm.”

Nevertheless, believers, like the biblical figure Job, “never stop praying” even when their prayers may seem like protests to God.

“Very often, even protesting before God is a way of praying,” the pope said. “And we, who are far less holy and patient than Job, also know that in the end, at the end of this time of desolation, during which we have raised to heaven silent cries and asked, ‘Why?’ many times, God will answer us.”

Faith is Bolstered by Prayer, Not Money, Power, Media

Christians are Meant to Serve, Not be Served
Share