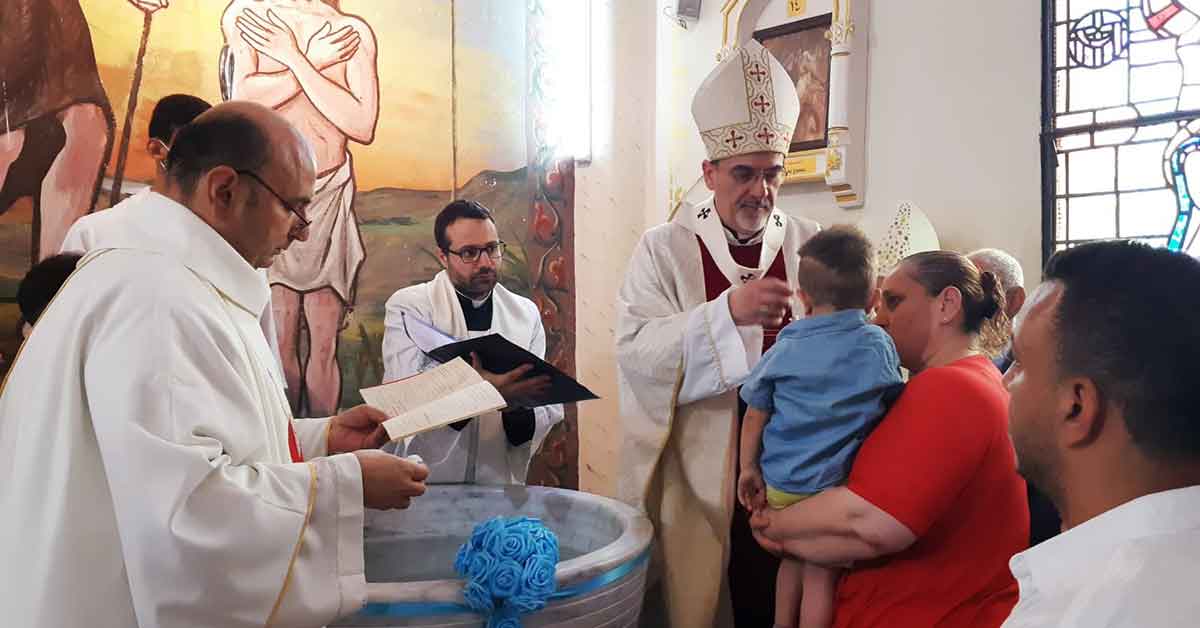 Archbishop Pierbattista Pizzaballa, Latin patriarch of Jerusalem, baptises a child on June 16, 2021, during his four-day visit to Gaza. The patriarch assured the congregation of the tiny Holy Family Parish that they were not forgotten and that he would return. (CNS photo/courtesy Holy Family Parish, Gaza)

By Judith Sudilovsky –  A day that started with heavy hearts visiting homes damaged in May violence between Hamas and Israel ended in a celebration of faith, love and family June 16 as Archbishop Pierbattista Pizzaballa, Latin patriarch of Jerusalem, conducted a flurry of religious ceremonies for members of the tiny Catholic community in Gaza.

“The ceremonies renewed spirits,” said Sami El-Yousef, CEO of the Latin Patriarchate who accompanied Archbishop Pizzaballa on the four-day visit to Gaza with retired Bishop Giacinto-Boulos Marcuzzo and five other members of the Latin Patriarchate. “The first day we arrived … everyone was really tired, feeling helpless … neglected and deserted. Today there was a completely different spirit. The spirit was absolutely joyful. People were happy to have His Beatitude here.”

El-Yousef told CNS in a phone call from Gaza on June 16 that he had been awakened early that morning by another round of Israeli bombings, one of the targets some 400 meters from where he slept in the Rosary Sisters’ guesthouse.

The Israeli Defence Forces said it targeted Hamas military compounds after incendiary balloons sent from Gaza lit 20 fires in southern Israel on June 15. Hamas says the explosive balloons were in retaliation for a march in the Old City of Jerusalem by Israeli nationalists.

“I woke up in a panic with a huge blast shaking the building. The sisters laughed because they said it was only a small sample of what they had experienced,” he said, noting that both of the Rosary Sisters’ buildings suffered serious structural damage from bombing in May, and the administration building may need to be demolished and rebuilt.

He said whole blocks of buildings had been rendered unstable where the IDF targeted suspected Hamas compounds using advanced-technology bombs that created vibrating effects, destroying foundations of other buildings. In addition, major street intersections were hit where underground tunnels were suspected, making driving difficult in the aftermath.

El-Yousef noted the presence of Egyptian contractors and construction workers working “very aggressively” on clearing the damage, indicating, he said, that perhaps Egypt – which has also imposed an intermittent blockade on Hamas-ruled Gaza – was now invested in the reconstruction of Gaza.

In addition to already established Latin Patriarchate assistance programmes such as school scholarships, medical aid, and help for the elderly, Archbishop Pizzaballa said the patriarchate would help 32 Christian families repair their homes.

The patriarchate also will support professional psychosocial programmes to help children and adults dealing with trauma, working with Father Gabriel Romanelli, the Holy Family Parish priest, and with summer camps and help to Scout groups. In addition, the patriarchate will provide food packages and vouchers for vulnerable families.

“We saw a lot of people severely affected by the latest round (of hostilities), and he says it is time to provide support for the Living Stones with psychosocial support and intervention,” said El-Yousef. “He sees resilience through education, upgrading schools through better communication skills.”

When leaving the parish, Archbishop Pizzaballa told the faithful they were not forgotten and the patriarchate would continue to support them, El-Yousef said, and the archbishop promised to return.