Priesthood is Closeness with the Faithful 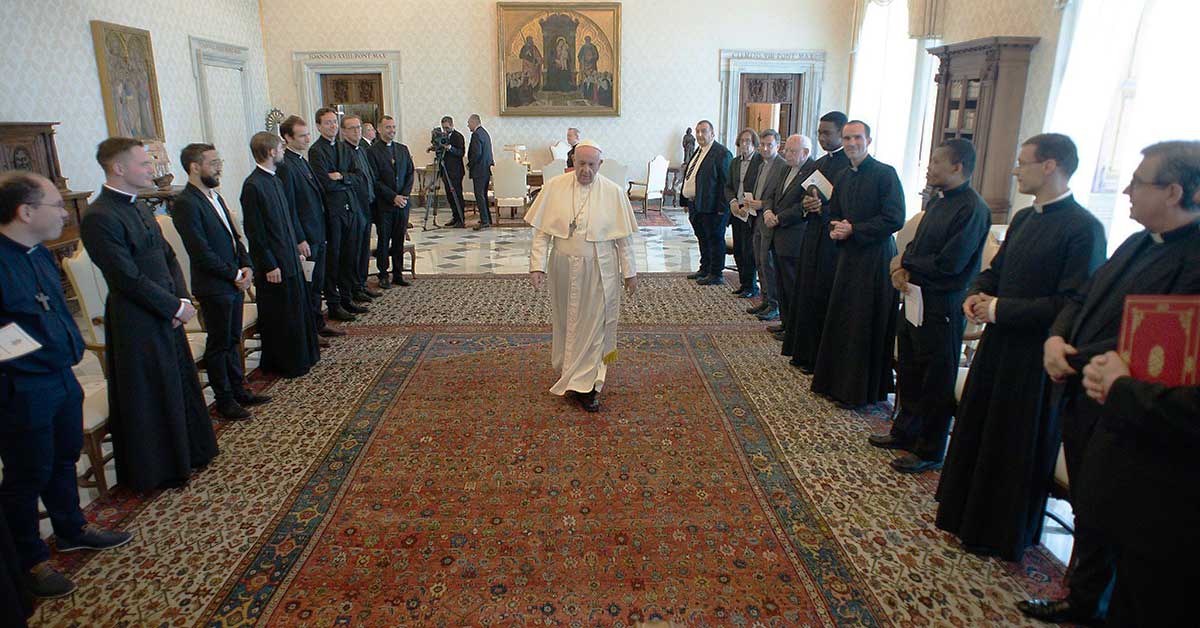 Pope Francis arrives June 7, 2021, for an audience at the Vatican with priests staying at the St Louis of France residence for clergy in Rome. (CNS photo/Vatican Media)

By Cindy Wooden – Pope Francis told a group of priests studying in Rome that if they do not want to be pastors, spending time with the faithful, they should request dismissal from the priesthood and concentrate on academics instead.

“Be pastors with the scent of your sheep, persons able to live, laugh and cry with your people – in other words, to communicate with them,” the pope told the priests June 7.

The priests, who are studying at pontifical universities in Rome, live at the city’s St. Louis of France residence.

“If you think of a priesthood isolated from the people of God, that is not a Catholic priesthood,” he said. A Catholic priest puts God and God’s people at the centre of his daily concerns, setting aside self-interest and “dreams of greatness.”

“To put God’s holy faithful people at the centre, you must be a pastor,” he said.

A priest who would say, “No, I would like to be an intellectual only, not a pastor,” would be better off asking for “a reduction to the lay state,” the pope said. “But if you are a priest, be a pastor.”

Obviously, there are many ways to be a pastor, he said, but all those ways involve being “in the midst of God’s people.”

During the ongoing year dedicated to St Joseph, Pope Francis asked the priests “to rediscover the face of this man of faith, this tender father, a model of fidelity and trusting abandonment to God’s plan.”

St. Joseph is a reminder that “having faith in God also includes believing that he can work even through our fears, our frailties, our weaknesses,” he said. “We must not leave frailty aside: it is a theological place.”

“My fragility, the fragility of each one of us, is a theological place of encounter with the Lord. The ‘superman’ priests end up badly, all of them,” Pope Francis said. “The fragile priest, who knows his weaknesses and talks about them with the Lord, he will be fine.”

To be the “apostles of joy” that the church and its people need, priests also must have a sense of humour, he said, and they must cultivate gratitude for being called to serve people and the church.