Pope Leads Prayers for Children who Died in Canadian Schools 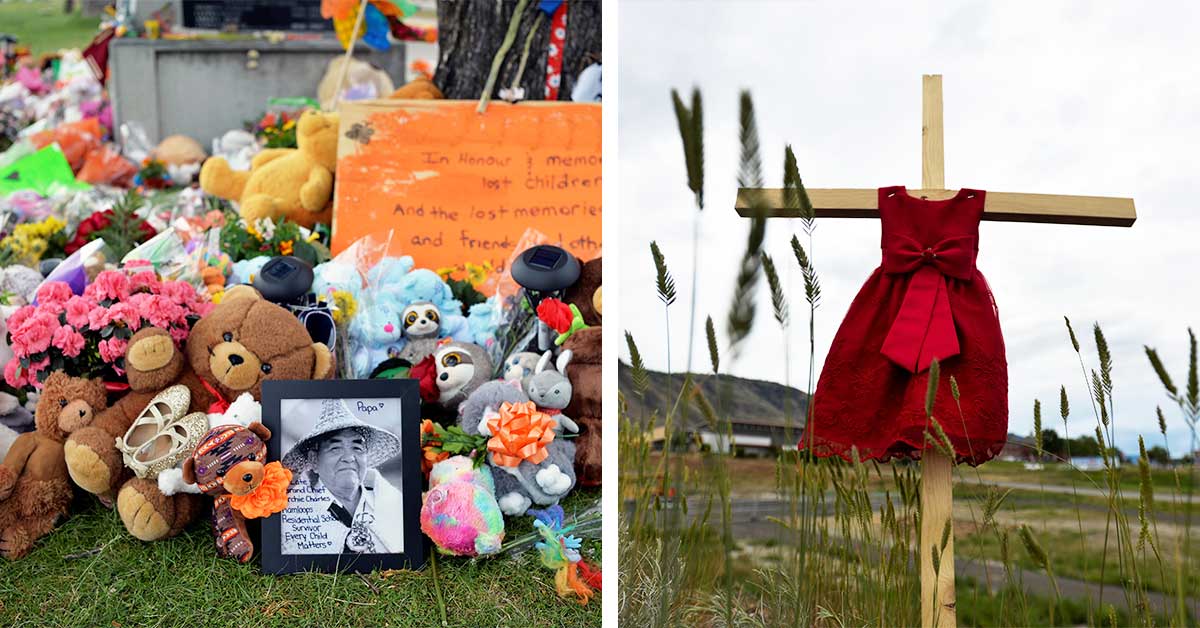 (Left) A photo of a Kamloops Residential School survivor and former chief, Archie Charles, is seen in a memorial on the grounds of the former Indian Residential School June 6, 2021. (Right) A child’s red dress hangs on a cross near the grounds of the former school. The remains of 215 children, some as young as 3 years old, were found at the site in May in Kamloops, British Columbia. Pope Francis expressed his sorrow at the discovery of the remains at the school, which was run from 1890-1969 by the Missionary Oblates of Mary Immaculate. (CNS photo/Jennifer Gauthier, Reuters)

By Cindy Wooden – Pope Francis led hundreds of pilgrims and visitors in St. Peter’s Square in a moment of silent prayer for the Indigenous children who died in Canadian residential schools and for their grieving families.

After praying the Angelus June 6, the pope told the crowd, “With sorrow, I am following the news from Canada about the shocking discovery of the remains of 215 children, pupils at the Kamloops Indian Residential School in the Province of British Columbia.”

“I join the Canadian bishops and the whole Catholic Church in Canada in expressing my closeness to the Canadian people who have been traumatised by this shocking news,” the pope said. “This sad discovery further heightens awareness of the pain and sufferings of the past.”

The Tk’emlúps te Secwépemc First Nation reported on May 30 that using ground-penetrating radar an estimated 215 bodies had been found in unmarked graves at the site of the former Kamloops Indian Residential School.

The school opened in 1890 and, on behalf of the Canadian federal government, was run by the Oblates of Mary Immaculate until 1969. After that, the federal government took over the administration and ran the facility as a residential building for students at day schools. It was closed in 1978.

Canada’s Truth and Reconciliation Commission, which has been studying the residential-school system as part of a broader look at the treatment of the nation’s Indigenous communities, has records of 51 children dying at the Kamloops school, according to information posted on the website of the Oblates’ Lacombe province.

After his Angelus address, Pope Francis led hundreds of pilgrims and visitors in St Peter’s Square in a moment of silent prayer for the children who died in Canadian residential schools and for their grieving families.

“At this point, there is not a clear explanation” as to why an estimated 215 bodies were discovered there, the OMI website said. “Clearly there is a significant discrepancy between their records and what was found by the Tk’emlúps te Secwépemc First Nation. We will continue to work with the Tk’emlúps te Secwépemc First Nation, through the RBCM (Royal British Columbia Museum), who curate our archives, in the search of understanding this distressing discrepancy.”

The Oblates said that while the Anglican, United (Methodist) and Presbyterian churches ran some of the 130 Indian Residential Schools in Canada, more than 70 of them were run by Catholic orders with the Oblates administering the majority of them.

In 2015, Canada’s Truth and Reconciliation Commission called upon Pope Francis to visit Canada and make a formal apology to Indigenous survivors, their families and communities for the abuse suffered in Catholic-run residential schools.

During a visit to Bolivia in 2015, Pope Francis issued an apology to all the Indigenous peoples of the Americas for abuses suffered.

During a meeting at the Vatican in 2017, Canadian Prime Minister Justin Trudeau personally asked Pope Francis to help Canadians “move forward on a real reconciliation” with the country’s Indigenous people “by issuing an apology” on behalf of the Catholic Church for its role in harming their communities.

At his Sunday Angelus appointment, Pope Francis prayed that “the political and religious authorities in Canada” would “continue to work together with determination to shed light on this sad event and humbly commit themselves to a path of healing and reconciliation.”

The discovery of the bodies, he said, shows a need to turn away from every form of colonisation and instead “walk side by side in dialogue, mutual respect and recognition of the rights and cultural values of all the daughters and sons of Canada.”

“We commend to the Lord the souls of all the children who have died in the Canadian residential schools,” he said, “and we pray for the grief-stricken Indigenous families and communities of Canada.”