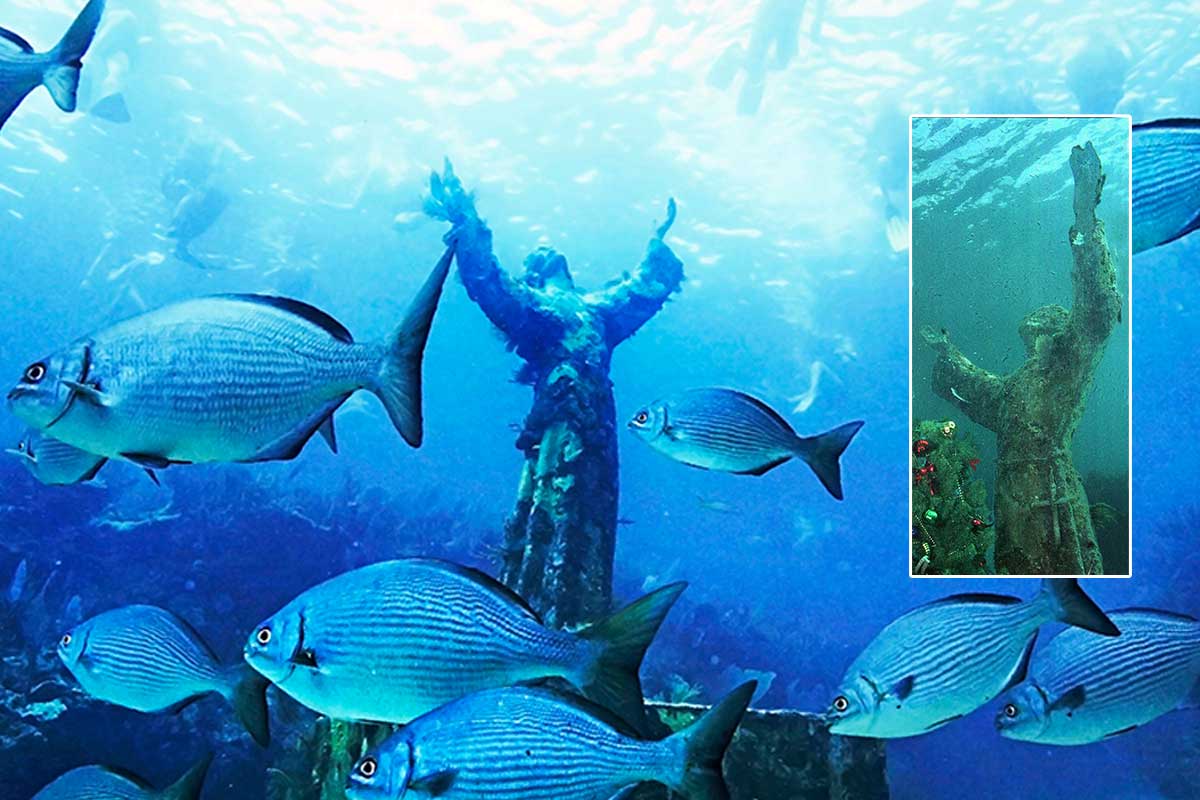 A replica of Christ of the Abyss statue is pictured surrounded by fish in the Florida’s Key Largo John Pennekamp State Park. The mould was made from the original statue off the Italian Riviera, where pioneer Italian diver Dario Gonzatti lost his life scuba diving in 1947. At the Italian site there now stands a bronze Christ, created by Italian sculptor Guido Galletti. (CNS photo/courtesy VISIT FLORIDA)

By Carol Glatz – Imagine a pilgrimage where the faithful gear up with scuba fins and oxygen tanks or snorkel sets rather than hiking boots, sun hats and trek poles. That’s what happens in the crystal-clear waters of the Paradise Gulf along the Italian Riviera near Genoa.

Pilgrimages to the bronze statue of Christ of the Abyss, a 2,4m-tall sculpture submerged 17m below the surface of the sea, were featured in the Vatican newspaper, L’Osservatore Romano, July 28.

The statue, located offshore halfway between the small coastal villages of Camogli and Portofino, was the first known statue of Christ to be placed in the sea as a sign of his peace and protection for those who live, work or play by the water, to be a place of prayer and to commemorate those who have died there.

According to Italian news, sports and tourism websites, the idea came from Genoa-born Duilio Marcante, the so-called “father” of underwater diving education. The statue’s home would be near where Marcante’s friend, Dario Gonzatti, died during a dive in 1950. Gonzatti, Marcante and Egidio Cressi created and tested the first prototypes of “Self-Contained Oxygen Breathing Apparatus” (ARO) in those waters.

In 1952, Marcante proposed the idea of creating an underwater “Christ of the Abyss” to Giacomino Costa, a Genovese entrepreneur, shipowner and then-president of the Catholic Italian Sports Centre.

Costa asked Cardinal Giuseppe Siri of Genoa whether it would be inappropriate to place a religious statue on the bottom of the sea. The cardinal turned to Pope Pius XII for guidance. Not only did the pope approve of the initiative, but he also sent a bronze medallion that would then be mounted on the statue’s base. In 2014 Pope Francis sent a medallion commemorating the 60th anniversary of the erection of the statue.

The Italian sculptor Guido Galletti created the statue using more than 259kg of bronze, made up of metals donated from all over the world: old bells, Olympic and war medals, coins, ship fragments and even propellers from U.S. submarines.

The enormous statue was fixed to the sea floor on Aug. 29, 1954. Galletti also made a small copy of the Christ statue for Pope Paul VI in 1964 and, years later, Costa’s adult children found it had ended up in the barracks of the Vatican’s fire department.

While scuba divers can visit the statue any time of year – and many leave behind votives or rosaries – the parish of St Fruttuoso of Camogli and local diving groups pay tribute to the Christ of the Abyss every last Saturday in July with a dive and prayers, a candlelight procession and a Mass for those lost at sea. The COVID-19 pandemic curtailed those celebrations the past two years, however.

Father Danilo Dellepiane of the Basilica di Santa Maria Assunta in Camogli explained that the Christ of the Abyss represents “the guardian of the sea” and recalls “the certainty of the resurrection,” he told the Vatican newspaper, L’Osservatore Romano, July 28.

“It is a symbol of Christ’s victory over every evil, every struggle and all suffering,” he said.

An exact replica of Galletti’s statue — cast from the same mold as the original — was made for the seabed off the shore of Key Largo, Florida, in John Pennekamp Coral Reef State Park.

Numerous other renditions of Christ of the Abyss are located underwater in lakes and oceans in many other parts of the world.