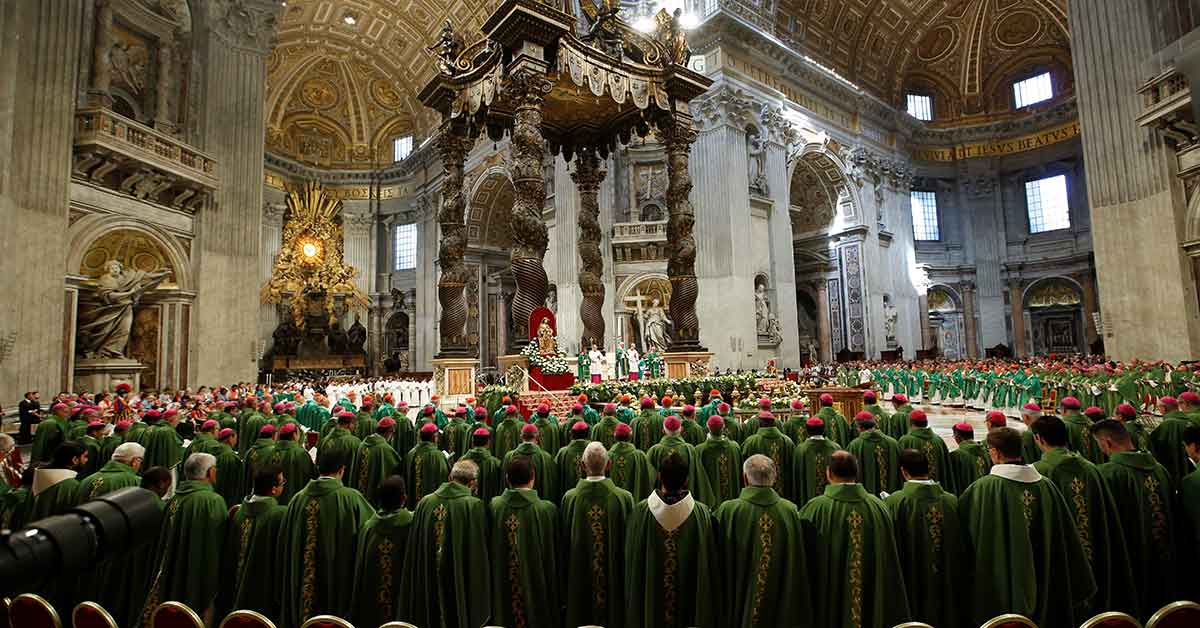 Pope Francis leads a Mass to close a three-week Synod of Bishops for the Amazon at the Vatican in this Oct. 27, 2019, file photo. The Vatican recently released the names of two commissions charged with assisting the leaders of the Synod of Bishops’ general secretariat in reviewing documents, drafting resources and developing best practices for the 2023 Synod of Bishops on synodality. (CNS photo/Remo Casilli, Reuters)

By Junno Arocho Esteves – The Vatican released the names of members of two commissions charged with assisting the leaders of the Synod of Bishops’ general secretariat in reviewing documents, drafting resources and developing best practices.

According to the synod website, the theological commission and the methodology commission will include religious and lay experts from around the world.

The theme chosen by the pope for the next synod is: “For a synodal church: communion, participation and mission.”

Cardinal Mario Grech, secretary-general of the Synod of Bishops, told Vatican News in May that, although originally scheduled for 2022, the synod will take place in October 2023 to allow for broader consultation at the diocesan, national and regional level.

In revisions to the synod process announced in May, Pope Francis has asked that it begin with consultations with laypeople on the diocesan level before the discussion and discernment moved to a national level and then the 2023 synod assembly itself.

In an editorial published in the Spanish Catholic magazine Revista Ecclesia in May, Bishop Luis Marín de San Martín, undersecretary of Synod of Bishops, said four commissions will be created “to help the general secretariat: communications, methodology, spirituality and theology. They will all have an international character and integrating different cultures.”

The theological commission, led by Bishop Marín, is comprised of 25 experts in theology, philosophy and canon law from around the world, including the United States, Italy, Spain, Burkina Faso, Syria, Tanzania and Mexico.

The commission will “review texts and documents and possibly make suggestions; present theological proposals for the development of synodality; produce and share materials for theological study; and collaborate closely with other commissions.”

The methodology commission, which is comprised of nine members, will be led by Xaviere Missionary Sister Nathalie Becquart, undersecretary of synod of bishops, and is charged with developing best practices and proposing processes at the local, national, and international level. Sr Hermenegild Makoro CPS has been named to the Commission of Methodology.

The list of members of the synod’s communications and spirituality commissions are expected to be published later.