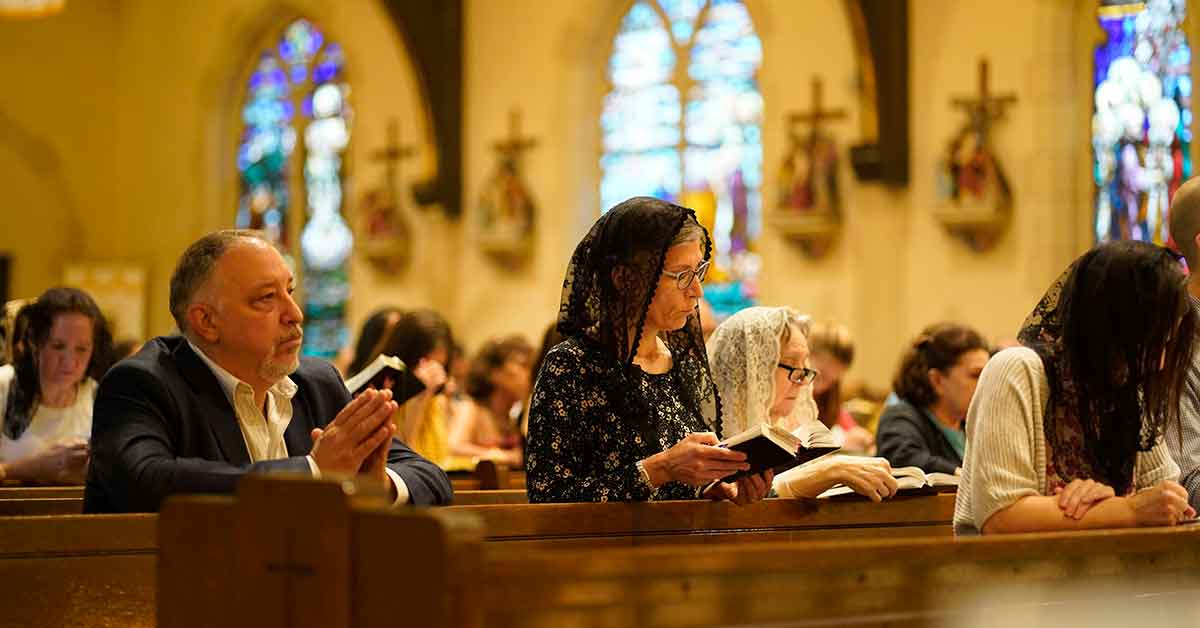 Worshippers attend a traditional Latin Mass on July 18, 2021, at St. Josaphat Church in the Queens borough of New York City. The parish, located in the Diocese of Brooklyn, celebrates a traditional Latin Mass on Sundays and five other days of the week. The Sunday liturgy has a dedicated following, drawing more than 150 people from Queens and neighbouring counties, in addition to southwestern Connecticut and northern New Jersey. (CNS photo/Gregory A. Shemitz)

By Maria Wiering – Archbishop Bernard A. Hebda of St. Paul and Minneapolis said on July 16 that, for now, parishes that celebrate Mass in the extraordinary form – also known as the “traditional Latin Mass” or “Tridentine Mass” – should stick to the status quo.

Archbishop Hebda has formed a task force to review Pope Francis’ new law to place greater oversight on the use of that form of the Mass.

Auxiliary Bishop Andrew H. Cozzens is chair of the task force, which will take time to understand the new law and consider the next steps to take to implement it in the archdiocese.

Noting that the norms were effective as of July 16, Archbishop Hebda said he “will need some time to study the new norms, examine our local situation and seek counsel.”

“No new public liturgical celebration of the extraordinary form, however, should be introduced anywhere in the archdiocese at this time without my written permission.”

Currently, Mass in the extraordinary form is regularly offered in the archdiocese at seven parishes.

Saying he was acting for the good of the unity of the Catholic Church, Pope Francis July 16 restored limits on the celebration of the Mass according to the Roman Missal in use before the Second Vatican Council, overturning or severely restricting permissions St. John Paul II and Pope Benedict XVI had given to celebrate the so-called Tridentine-rite Mass.

His apostolic letter “Traditionis Custodes” (“Guardians of the Tradition”) declares the liturgical books promulgated after the Second Vatican Council to be “the unique expression of the ‘lex orandi’ (law of worship) of the Roman Rite,” restoring the obligation of priests to have their bishops’ permission to celebrate according to the “extraordinary” or pre-Vatican II Mass and ordering bishops not to establish any new groups or parishes in their dioceses devoted to the old liturgy.

Priests currently celebrating Mass according to the old missal must request authorization from their bishop to continue doing so, Pope Francis ordered, and for any priest ordained after the document’s publication July 16, the bishop must consult with the Vatican before granting authorization.

In a statement issued late July 16, Los Angeles Archbishop José H. Gomez, president of the U.S. Conference of Catholic Bishops, encouraged his brother bishops “to work with care, patience, justice and charity” as “these new norms are implemented … (and) as together we foster a eucharistic renewal in our nation.”

Like Minnesota’s archbishop, a number of other U.S. bishops similarly told their priests who celebrate the Mass in the extraordinary form and their parishes that already are allowed to have the celebration of this Mass that they can continue to do so while they further study the document.

In a July 19 statement, Baltimore Archbishop William E. Lori said that further study of the norms by individual bishops and the USCCB “will help determine how these norms apply here in the Archdiocese of Baltimore. In the meantime, the current practice will continue and going forward every effort will be made to meet the pastoral needs of those who frequent Holy Mass in the extraordinary form.”

“Many questions have been raised by today’s publication of Pope Francis’ motu proprio ‘Traditiones Custodes.’ I have informed our clergy that I am granting temporary permission for those priests competent in offering Mass in the Extraordinary Form to continue to do so in churches that already have an Extraordinary Form Mass on their schedule or in a private setting until further study and clarification can inform an appropriate implementation of this document. Thank you for your patience.”

Bishop Anthony B. Taylor of Little Rock, Arkansas, in a July 16 statement said it was “incumbent on me as your bishop to indicate the implications of this change for our diocese.”

The new norms “do not apply to our two personal parishes for the celebration of the Latin Mass: St. John the Baptist Parish in Cabot and Our Lady of Sorrows Parish in Springdale,” he explained. “There is no change for these parishes or the priests serving them.

“All that is required of them and the Fraternity of St. Peter (FSSP) priests serving them is that they accept the validity and legitimacy of the liturgical reform of Vatican II, which they do. ‘Traditionis Custodes’ does caution me not to establish any additional personal parishes for the celebration of the Latin Mass going forward.”

“‘Summorum Pontificium’ (issued by Pope Benedict) sought to foster the healing of the schism of Archbishop (Marcel) Lefebvre and others who rejected not only the liturgical reforms of Vatican II but indeed often the council itself,” Bishop Taylor explained. “As it turned out, not only did ‘Summorum Pontificium’ not achieve that purpose, the unintended result in many places was to create further division within parishes and among priests.”

“Traditionis Custodes, the result of consultation among bishops in 2020, “seeks to foster unity by removing this source of division in our parishes,” he said.

The document also means, Bishop Taylor said, that three “regular parish churches” where the Mass in the extraordinary form has been celebrated can no longer have the Mass – Holy Redeemer Church in El Dorado, St. Peter the Fisherman Church in Mountain Home and St. Michael Church in Cherokee Village.

The bishop said he is required to decide where the Latin Mass can be celebrated and is designating the churches in the personal parishes in Cabot and Springdale.

In San Francisco, responding to a request for comment from Catholic News Agency on July 16, Archbishop Salvatore J. Cordileone said: “The Mass is a miracle in any form: Christ comes to us in the flesh under the appearance of bread and wine. Unity under Christ is what matters.

“Therefore the traditional Latin Mass will continue to be available here in the Archdiocese of San Francisco and provided in response to the legitimate needs and desires of the faithful.”

In Pittsburgh, Most Precious Blood of Jesus Parish was established as a personal parish to support the celebration of the traditional Latin Mass in July 2019. Under the new norms, Bishop David A. Zubik confirmed there will be no alterations to the parish’s status and “no changes” to these Masses celebrated at the church.

“With today’s communication from the Holy Father, we remain committed to work for the unity of the church as Pope Francis implores us to do in his latest teaching,” Bishop Zubik said in a statement.

Bishop Donald J. Hying of Madison, Wisconsin, said in a July 16 letter to the faithful of his diocese that “before making any definitive decisions,” he “will seek to understand fully what the Holy See is decreeing.”

“Although I do not celebrate the Tridentine Mass myself, I have great esteem for its form and its antiquity, knowing that many Catholics in our diocese draw tremendous graces and blessings by participating in it,” the bishop said. “This appreciation will certainly guide me in any decisions needed to be made” to best serve “the needs of the faithful, of parishes and of the diocese as a whole.”

In the meantime, he said, some points of the norms “require more immediate attention.”

“Priests of the diocese and other priests ministering stably in the diocese who wish to celebrate according to the 1962 Roman Missal can presume my authorization to do so for now, in fidelity to all relevant liturgical and disciplinary norms, but they should anticipate in the near future that I will ask them to contact me to request continued authorization,” Bishop Hying said.

Until “times and places for the public celebration of Mass in the Extraordinary Form” are designated, Masses can continue to be celebrated at the times and places in which they have regularly been celebrated throughout the diocese, including in parish churches, he said, adding that the readings must “be proclaimed in the vernacular using translations of the sacred Scripture approved for liturgical use by the USCCB.

“May all of us, whether we worship at the Novus Ordo Mass or the Tridentine Mass, find our unity in the Eucharist, the living bread of God who died and rose from the dead, so that we could be saved and live forever with the Lord,” Bishop Hying added.