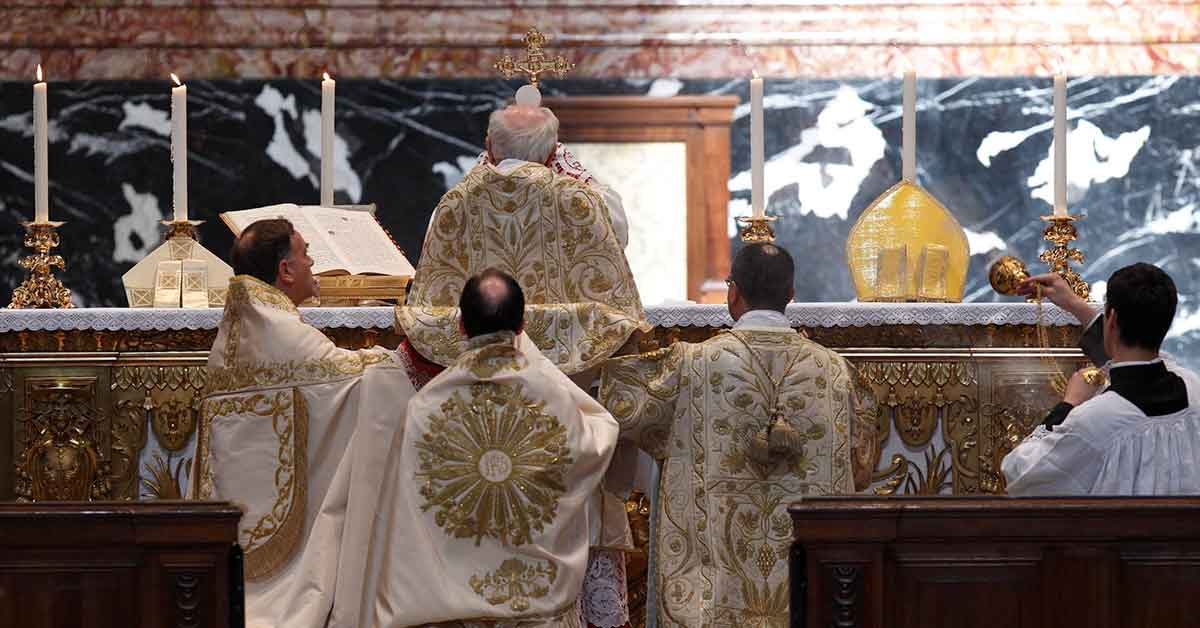 Cardinal Walter Brandmuller elevates the Eucharist during a Tridentine Mass at the Altar of the Chair in St. Peter’s Basilica at the Vatican May 15, 2011. (CNS photo/Paul Haring)

By Cindy Wooden – Pope Francis’ letter explaining why he was restricting the use of the pre-Vatican II Mass “fearlessly hits the nail on the head: the TLM (Traditional Latin Mass) movement has hijacked the initiatives of St John Paul II and Benedict XVI to its own ends,” said Archbishop J. Augustine Di Noia, who insisted he was speaking as a theologian and not as a Vatican official.

When St John Paul and Pope Benedict expanded the possibility of using the pre-Vatican II Mass, they were hoping to promote unity in the church and to counter abuses that were widespread in the celebration of the post-Vatican II Mass, the archbishop said in an email to Catholic News Service July 20.

While the liberal permission to use the older Mass has not promoted the hoped-for healing of the rift with members of the Society of St Pius X, established by the late Archbishop Marcel Lefebvre, the archbishop said, “what we have got now is a movement within the church herself, seemingly endorsed by her leaders, that sows division by undermining the reforms of the Second Vatican Council through the rejection of the most important of them: the reform of the Roman Rite.”

Archbishop Di Noia urged Catholics – both those upset by Pope Francis’ decision and those gleefully applauding it – to reread Pope Benedict’s 2007 document, “Summorum Pontificum,” which gave broad permission to use the pre-Vatican II Roman liturgy.

Pope Francis withdrew most of those permissions July 16 with his document, “Traditionis Custodes,” and likely either consulted with or at least gave advance copies of the document to retired Pope Benedict.

Since St. John Paul allowed some use of the older liturgy and, especially since “Summorum Pontificum,” Archbishop Di Noia said, “the thing has gotten totally out of control and become a movement, especially in the U.S., France and England – a movement that aggressively promotes the Traditional Latin Mass among young people and others as if this ‘extraordinary form’ were the true liturgy for the true church.”

While “The Latin Mass Directory” – www.latinmassdir.org – an online listing of churches and chapels where the pre-Vatican II Mass is celebrated regularly and with a local bishop’s permission, may not be comprehensive, Archbishop Di Noia said that from his experience, it is accurate in indicating that the older liturgy is offered far more in the United States than any other country. It appears to be no coincidence that the only official translation of Pope Francis’ documents provided by the Vatican were in English.

After the pope published the new restrictions, there was widespread speculation online about a survey the pope said he asked the Congregation for the Doctrine of the Faith to carry out among bishops regarding the use of the old rite in their dioceses. The Vatican has not published the results of the survey, and Archbishop Di Noia said he did not have the results.

He said Pope Francis explained in his letter to bishops that “his rationale for the abrogation of all previous provisions in this area is not based on the results of the questionnaire but only occasioned by them. The decisive point is there for all to behold: the evident and ongoing betrayal of the intentions of the two pontiffs who permitted the celebration of the 1962 Missal to draw traditionalists back into the unity of the church. What the Holy Father is saying is that the TLM movement is working for objectives that are precisely contrary to what St. John Paul and Benedict XVI hoped for.”

The archbishop said Catholics concerned about the liturgy should reread “Redemptionis Sacramentum” (“The Sacrament of Redemption”), a 2004 document from the Congregation for Divine Worship and the Sacraments emphasising rules that must be followed in the Latin-rite celebration of Mass to ensure reverence and the dignity of the celebration.

Like his predecessors, the archbishop said, Pope Francis believes “the way to address abuses is not by adopting the ‘extraordinary form,’ but by promoting the true renewal of the liturgy which, in many places, has simply not happened.”

“As Pope Francis implies,” he said, “this renewal is not a matter of creatively ignoring the rubrics, but finding the true spirit of the liturgical reform by mining the riches of the Word of God which have now been made available both in the vastly expanded cycles of the Lectionary and the Divine Office, and celebrating the Mass with absolute fidelity to the texts and rubrics and to its proper nature as a participation in the celestial worship of Christ for the Father with the communion of saints.”

“Many people with a desire for Latin in the liturgy would have been better served by the ‘novus ordo’ (the modern Mass) in Latin than by the repristination of the pre-conciliar liturgy,” the archbishop said.

“The TLM movement promotes the rejection of that which the liturgical movement sought above all: active participation of the faithful in the liturgical celebration of the mysteries of Christ,” he said. “In TLM, there is little concern for active participation. The traditional Latin Mass, as in the past, becomes the occasion for engaging in various types of private prayer if the participants don’t follow the Mass with a missal.”

It is no coincidence, he said, that Benedictines and Dominicans were the early leaders in the liturgical reform movement before the Second Vatican Council; the communal experience of liturgy was fundamental to their spirituality and was the “bedrock” of the Christian life for them. Previously, and still today with the old Latin Mass, “individual mystical experience” was the foundation of spirituality.

The liturgical reform movement “was recognised at Vatican II as the work of the Holy Spirit and became the basis for a massive overhaul of the liturgical life of the church,” he said. “Pope Francis is right to see in the repristination of the pre-conciliar liturgy at best a form of nostalgic dalliance with the old liturgy and at worst a perverse resistance to the renewal inspired by the Holy Spirit and solemnly confirmed in the teaching of an ecumenical council.”