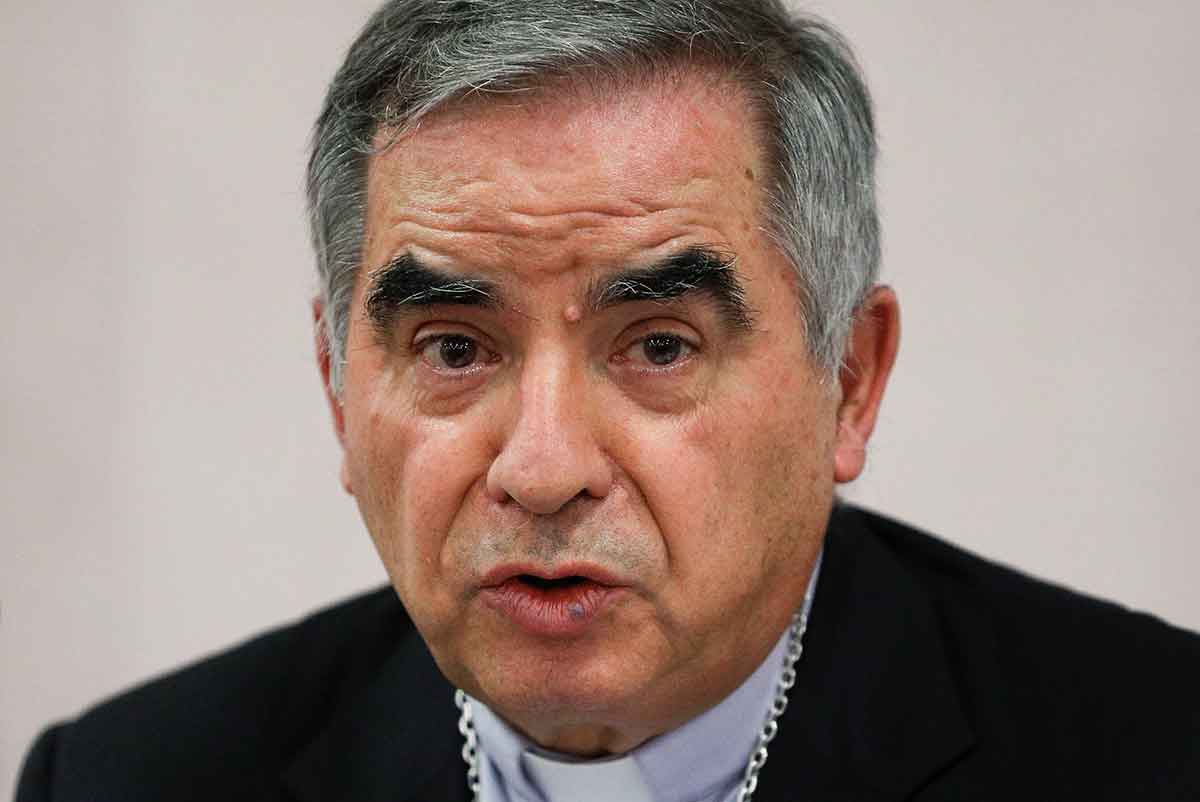 Cardinal Angelo Becciu speaks with journalists during a news conference in Rome on Sept. 25, 2020, after he was asked by Pope Francis to resign as prefect of the Congregation for Saints’ Causes. On July 3, 2021, the Vatican announced Cardinal Becciu and nine other individuals and entities were indicted on charges ranging from embezzlement to money laundering and abuse of office. (CNS photo/Guglielmo Mangiapane, Reuters)

By Junno Arocho Esteves – In an unprecedented move, Vatican prosecutors have indicted 10 individuals and entities, including Cardinal Angelo Becciu, former prefect of the Congregation for Saints’ Causes, on charges ranging from embezzlement to money laundering and abuse of office.

The indictment included charges against “ecclesiastical and lay personnel of the Secretariat of State and senior figures of the former Financial Information Authority, as well as external figures active in the world of international finance,” the Vatican said July 3.

Their trial at the Vatican was set to begin on July 27.

In a statement released by his lawyers shortly after the announcement, Cardinal Becciu declared his “absolute innocence,” saying he was “the victim of a plot hatched against me.”

Cardinal Becciu said the accusations exposed him to “an unparalleled media pillory to which I did not defend myself, suffering in silence.” However, in November, he filed a lawsuit against the Italian magazine L’Espresso, claiming their reporting resulted in him losing his chance at becoming pope.

“Only by considering this great injustice as a test of faith can I find the strength to fight this battle for truth,” the cardinal said. “Finally, the moment of clarification is coming, and the court will be able to find the absolute falsity of the accusations against me and the dark plots that have evidently sustained and fed them.”

In April, the pope updated the laws governing the Vatican’s civil judicial system, stating that cardinals and bishops accused of a crime could be tried in a Vatican court, which, as it turned out, paved the way for the indictment against Cardinal Becciu.

The new law requires the pope’s approval before a cardinal can be indicted, approval Pope Francis gave for charging Cardinal Becciu.

The charges stem from a Vatican investigation into how the Secretariat of State used $200 million to finance a property development project in London’s posh Chelsea district and incurred millions of dollars in debt.

The investigation, which spanned across several countries, including the United Arab Emirates, Great Britain, the British island of Jersey, Luxembourg, Slovenia and Switzerland, “brought to light a vast network of relationships with financial market operators that have generated substantial losses for the Vatican finances, also drawing from resources destined for the personal charitable works of the Holy Father,” the indictment stated.

Cardinal Becciu was forced to offer his resignation to the pope in September after he was accused of embezzling an estimated 100,000 euros (R1,6 million) of Vatican funds and redirecting them to Spes, a Caritas organisation run by his brother, Tonino Becciu, in his home Diocese of Ozieri, Sardinia.

Speaking with journalists the day after his resignation, Cardinal Becciu said the pope made no mention of the London property deal during their meeting and insisted there was nothing wrong with the purchase, despite the Vatican’s ongoing investigation.

Nevertheless, questions remained as to whether funds from the Peter’s Pence collection were used to finance the deal. Peter’s Pence is a papal fund used for charity, but also to support the running of the Roman Curia and Vatican embassies around the world.

Cardinal Becciu consistently denied Peter’s Pence funds were used to purchase the London property; the money, he said, came from a fund within the Secretariat of State.

However, when asked by a journalist if the money in the Secretariat of State fund came from Peter’s Pence, Cardinal Becciu said, “Yes.”

Among the former Vatican officials included in the indictment are René Brülhart and Tommaso di Ruzza, respectively former president and former director of the Vatican’s financial watchdog agency, now known as the Supervisory and Financial Information Authority.

Also included in the indictment were: Msgr. Mauro Carlino, the former secretary of then-Archbishop Becciu when he served as “sostituto,” the No. 3 position in the Vatican Secretariat of State, who is accused of extortion and abuse of office; and Fabrizio Tirabassi, a former official at the Secretariat of State accused of corruption, extortion, embezzlement, fraud and abuse of office.

Enrico Crasso, a long-time investment manager who worked with the Vatican, faces the most charges, including embezzlement, extortion, corruption, extortion, money laundering, abuse of office, forgery and falsifying documents.

Several other players involved in the majority stake purchase of the London property were also indicted, including Gianluigi Torzi, an Italian broker who served as the middleman in the development deal, and London-based Italian financier Raffaele Mincione, the owner of the London property who is accused of embezzlement, fraud, abuse of office, misappropriation of funds and money laundering.

Torzi faces several charges, including the extortion of $17 million from the Vatican as payment for the majority stake and his role in brokering the deal. Nicola Squillace, a Milan-based lawyer who helped broker the London property deal, was also indicted on charges of fraud, embezzlement, and money laundering.

Cecilia Marogna, an Italian political analyst who allegedly was hired as a consultant by Cardinal Becciu, was also indicted on charges of embezzling money through a humanitarian organisation she ran in Slovenia. The organisation, Logsic Humanitarne Dejavnosti, was also included in the indictment.

In an interview with the Italian newspaper Corriere della Sera in October, Marogna claimed she was secretly hired by Cardinal Becciu, unbeknownst to the Vatican and the Secretariat of State, as a diplomatic back channel and that the money sent to her organisation was used for humanitarian missions, including the paying of ransoms for kidnapped missionaries.

According to several documents anonymously sent to the Italian news program, La Iene, the Vatican Secretariat of State sent an estimated 500,000 euros (R8,4 million) over a five-year period to Marogna.

Although the funds allegedly sent by Cardinal Becciu were labelled as “voluntary contribution for humanitarian mission,” La Iene reported that the money was instead used for purchases at several high-priced fashion boutiques, including Prada, Louis Vuitton, and Moncler.